Just A Little Catch Up

I always have a full schedule, but the last couple of weeks have seen me working some long hours and, oh, yeah, I've been knocking down some pretty good miles on the bike. As a result, I've been short on time and even shorter on desire to sit back down to the keyboard, but I'll try to do my duty and play a little catch up!

I've spent a couple of lunch hours attending meetings of the Little Rock Bike Friendly Community Committee and the Arkansas River Trails Task Force.
The hot topic for the LRBFCC continues to be the problematic stretch of Cantrell Road. The City had announced plans to bridge the RR tracks east of Dillard's and cross the 7 driveways on that stretch of road. Politics are very much in play as Stephens/ Collegiate School interests seem dead set against the more reasonable route on the south side of the road adjacent to the school property, while the plan for passing in front of Dillard's HQ is a Band-Aid at best and has no support from the cycling community. The latest concept calls for simply widening the sidewalk in front of the school and improving visibility at their driveway. This is also kind of a half-ass plan, but it may be the best we can hope for at the moment. Everyone involved is frustrated and the Collegiate School interests remain the cork in the bottle. There are plenty of other obstacles, such as the AHTD,  but eliminating the south side of Cantrell from consideration limits the realm of possibilities. Grant money has been acquired for repair of the washout on the Medical Mile, but it remains a road to nowhere without a viable route to the west. A proposal to connect it to Victory Street was also discussed, which would allow access to the Capitol area. I see that as having very low value relative to cost; however,  I will qualify that statement because the project could become a valuable spur if and when the Cantrell Road problem is resolved.

While Cantrell Road remains problematic, several other improvements are underway or near completion.
Work has begun on facility dubbed Two Rivers Plaza adjacent to Little Maumelle Creek in Two Rivers Park, some repaving has been done to the trail along Rebsamen Park Road, and the plaza at River Mountain Park is almost complete. 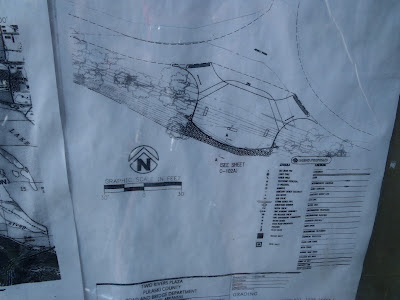 This drawing is among the permit information for the plaza being built along Maumelle Creek, giving riders and walkers a place to sit a spell along the otherwise brushy riverbank. 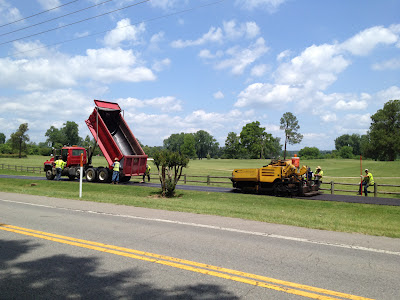 The bike path adjacent to the Rebsamen Golf Course got some new asphalt today. Photo compliments of John Martin. Repaving the road is a much more important (and expensive) project, but we'll take progress where we find it. Speculation is that there was some asphalt left over from the extension of the bike lanes near nearby traffic circle and it was put to good use.

The plaza and boardwalk in River Mountain Park at the foot of the Two Rivers Bridge appears to be complete and no work has taken place for some time. I contacted Sherman Smith, Public Works Director for the county, to ask for an update. I thought perhaps they were awaiting some preset date for a ribbon cutting, but Sherman advised me that the contractor was still awaiting delivery of some benches and other items to complete the project. 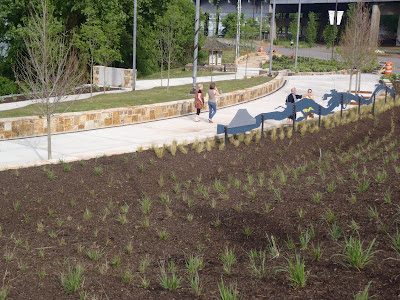 Judge Villines's plan for a grand opening of the very attractive River Mountain Plaza is to simply remove the orange barrels and cut away the plastic fencing. As you can see from this April 12 photo, people are already enjoying the new park feature.

Two Rivers Park Hours﻿
In a recent article I wrote about an encounter involving Pulaski County deputies and riders in Two Rivers Park and of the ambiguous signage defining the park's hours. Reaction was almost immediate with a sign going up at Two Rivers Bridge saying the park is open from 6AM-8PM. 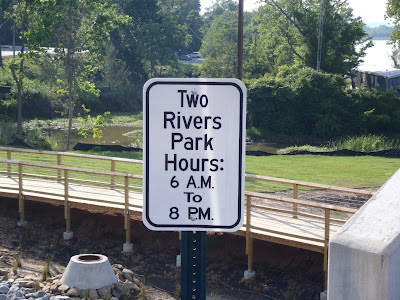 I'm told that this sign will soon be amended to allow through traffic at any hour.

In the summer months, that's more restrictive than the contradictory "Park Closes At Sunset" sign at the County Farm Road entrance. Everyone is scrambling to do the right thing and my understanding is that Judge Villines is refining the policy to close the park at 8PM , with the likely exception of riders with headlights. (ed. 5/7/12). I don't expect stringent enforcement of whatever policy comes about, but I appreciate the need for law enforcement to have a tool to control nighttime activity in isolated areas of the park.

CORRECTION/ UPDATE: After-dark use of Two Rivers Park is still under consideration, but may be limited to cyclists with headlights. There has been a problem with pedestrians getting lost in the park after dark. Darkness comes along with remarkable predictability, but the concept seems to remain elusive to some folks. I'll post when a policy is defined.
Thanks,JB

Concrete has been poured on the west branch on the LR terminus of the BDB. Surely it will open before october. It does not appear that much remains to be done.

Thanks, Pat. I meant to post a recent photo in the updates and just got sleepy! You're right, it looks close.