New BACA Leadership On A Roll!

The recently elected leadership team of BACA is on a roll. Last Wednesdays Ride of Silence drew 60 solemn cyclists who rode two abreast from the Clinton Library to the steps of the state capitol. Whereas in past years the rides have drawn good participation from the cycling community, there was little or no publicity and passers-by just looked and wondered. The team of BACA president Tim McKuen managed to get an article in the previous Monday's statewide paper and TV news coverage of the event as riders carried the names of fallen cyclists. The Ride of Silence is a national event and serves as a memorial to those killed while riding on public roads.

Friday was National Bike to Work Day and BACA board member Judy Lansky ramrodded this show. Judy wanted folks to truly ride to work, so caravans were arranged from and to various points in the city. Diane and I joined NLR Mayor Pat Hays at the Park Hill collection point, then went on to meet riders coming in from Lakewood and beyond at a location on North Hills Blvd. 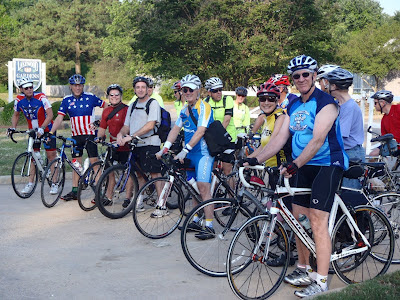 We had a pretty good pack by the time we reach North Hills Blvd. in North Little Rock, including Mayor Pat Hays, Parks Director Bob Rhoads, and Alderman Charlie Hight. Groups like this formed all over the city.

Since I usually work from home my ride to work was a bit of a loop. I was there primarily to report and to support the cause! This group rode to River Trail Station for coffee, juice and bagels. While there, we got a report that the Capital Hotel, one of several merchants offering amenities to riders, had a great pastry bar set up. We had to check that out! 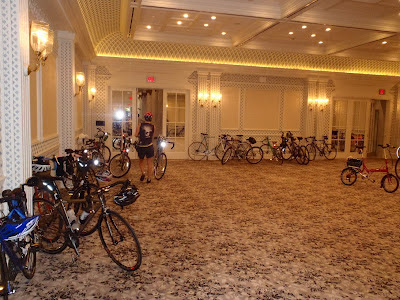 This is not the usual scene at the Capital Hotel banquet room. 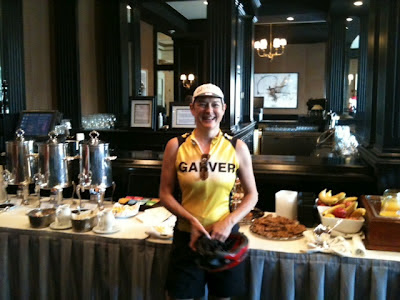 The spread at the Capital Hotel was impressive! Silverware and linen napkins complemented the fresh pastries nicely! Your Bike to Work button will also get you a free appetizer through May 24. Many local bike shops offered discounts to button holders and companies like Garver provided refreshment stops.

I love to see the bike community pull together for events like these. Both the Ride of Silence and Bike To Work Day were well organized. well publicized and very positive in nature. Thanks to BACA and to all of the merchants and businesses that offered time and resources to help make the happen.
Posted by JBar at 10:31 PM

All I want to know is, who is da hottie in the Garver jersey? ;-)

That one is mine!

You have a Garver jersey? Nice write up and some wonderful events. Video from Ride of Silence here: http://youtu.be/kodl4CXjOQk

I proudly wear my Garver jerseys! They have a great bike and fitness culture and,besides, I've ridden on their sponsership on a couple of charity rides so I am glad to represent. Good company and good folks! Thanks for the link, Joe.

Sometimes people don't believe me when I tell them about how much money you can get taking paid surveys online...

So I show them a video of myself getting paid $500 for filling paid surveys.