The weather this past Saturday turned out to be even more spectacular than had been forecast. Friday night when I wrote my article predicting a festive day on the River Trail, the high temperature was predicted at 68 degrees. Likely before the post had even been viewed, I had to edit the post to reflect the new forecast of 71 degrees. Saturday's eventual high was an April-like 77 degrees and the River trail and BDB were, indeed, crowded with the smiling faces of riders of every bend, dog walkers, standers and talkers, skaters, runners, strollers and some folks simply sitting in the sun under cloudless skies. 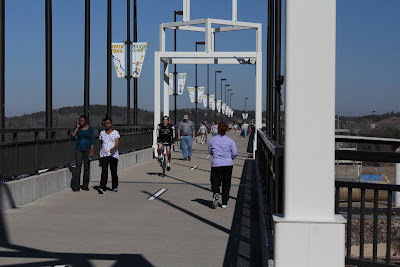 With the temperature hitting 77 degrees Saturday, the BDB was a busy place!﻿ 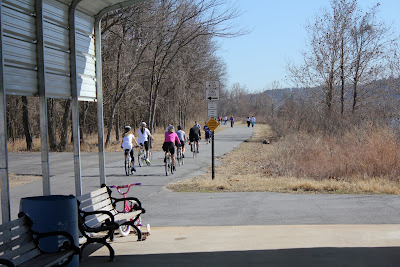 I think that many serious road riders chose to avoid the crowds and take advantage of the weather by heading out beyond the city limits, but I still saw a lot of folks that I know and there were a great many casual riders enjoying the day. 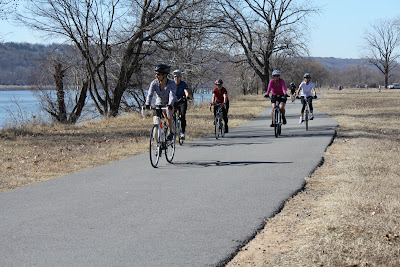 I met this pack-o-girls when one of them suffered a blow-out on the BDB. I heroically assisted their escort, John, in repairing the flat and received the kind offer of an end-of-ride margarita for my hard work. I had to pass on the cocktail, but they were having a fine time and I saw them several times during the course of the afternoon. 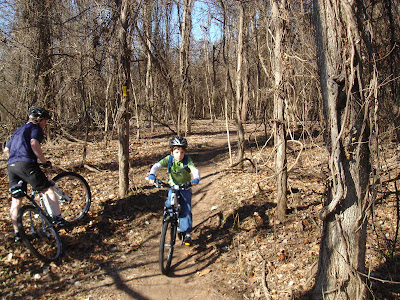 I wasn't equipped for dirt, but Lance Garrett shared this photo of his son, Levi, on the Pfeifer Loop. Burns Park and Camp Robinson also saw a lot of mountain bikers.
I think Saturday﻿ brought out a lot of what I'll call "seasonal riders". They're serious enough and may be dropping me come June, but they simply don't care to ride much in the cold and dark that goes along with typical winter riding. The ride opportunity of Saturday's weather could not be resisted, and the result of long layoffs could be seen in pained facial expressions as pale, hairy legs tried to recall their purpose and protested their awakening from hibernation. It also appeared that the winter months had somehow managed to shrink the kit of many riders.
Sunday was also a short-pants day, but things are heading back in the direction of rain, sleet and cold temps. I'm thankful for the blessing of a couple of warm days.
Posted by JBar at 8:09 PM

"pale, hairy legs tried to recall their purpose and protested their awakening from hibernation." My new mantra. Except you need to add something like "Like young scared children, the little legs seemed to be seeking shelter from the sun beneath a gelatinous gut."

True. The belly shade probably did help protect some sensitive skin. And it was a good day to deploy the new polarizing filter for my DSLR. The glare could have been excessive from those expanses of bright white hide.
It reminded me of this: