Accomplishments and Plans For The Future: Judge Buddy Villines 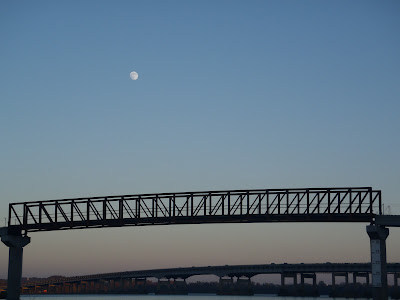 Two Rivers Bridge
I was pleased to have the opportunity to hear Judge Buddy Villines speak last weekend on the occasion of the Spokes bike shop opening. I've come to have a great deal of respect for the Judge and he didn't say anything to lessen that perception as he discussed both immediate and long term plans for bike routes in Pulaski County and beyond. Judge Villines recognizes the value of projects like the BDB and Two Rivers Bridge as investments by our generation in improved quality-of-life for generations to come. That vision, along with successful election campaigns, has given him the patience and time to see these projects through.  He also recognizes that bikes can be both practical transportation and recreational vehicles and that both uses contribute to healthier lifestyles. That's all well and good, but he is also pragmatic and has had projects at-the-ready as funding for specific types of transportation dollars have come available, giving us local taxpayers a pretty good return on our investment.
OK, enough praise of Buddy, what has he done for us lately? A lot, as it turns out. 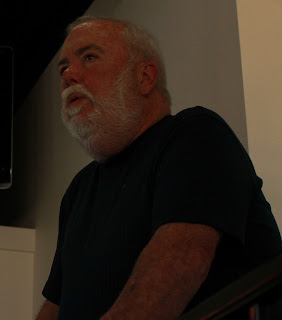 Pulaski County Judge Buddy Villines
It looks like the Two Rivers Bridge will be opening in late April or early May, still ahead of the initial June schedule, but a little behind the optimistic March date that I've heard for the last few months. There is still much concrete to be poured and the cold weather has become a factor. Villines assured the crowd that the bridge would open as soon as it is complete, though the parking, plaza and pavilion at the foot of the bridge would likely still under construction. He was very excited about the prospects for Two Rivers Park as he described descending the bridge into a canopy of overhanging trees, some natural areas allowed to "go native", tree gardens, a bike/pedestrian plaza and much more than I can recall. I can say that, when complete and mature, I think it will be a park like no other that I've ever seen. I'll try to obtain some detail for a future post. As for additional bike routes, he discussed the bike trails along Pinnacle Valley from County Farm Rd to Maumelle Park, a "spoke" system of routes to all corners of the county, possible cooperation with Faulkner County to tie the River Trail system to Conway with a bridge across Palarm Creek. Villines works closely with mayors Pat Hays and Mark Stodola and, though Little Rock always seems the weak sister of the trio, the cooperation between the three governments has yielded great results for our community. We already have a spectacular bike infrastructure that links dozens of parks, businesses, natural features and other attractions and things just keep getting better.
Posted by JBar at 9:54 PM

If we can get a trail into Conway, there are pretty of good roads to ride on west bound to take you all the way into Oklahoma (and east bound as well). With a few bypasses around some larger towns, a good set of paths to take people far and wide to/from Little Rock and other points wouldn't be too difficult a task to do.