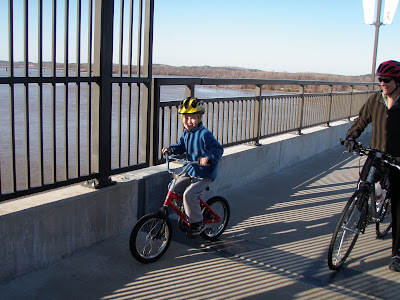 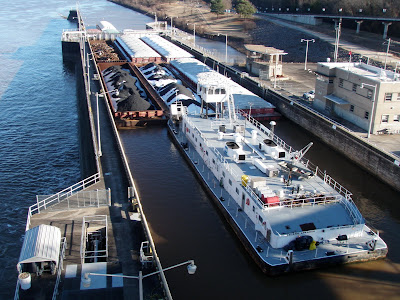 The weather has been a little harsh (OK, it's been real harsh) by Arkie winter standards. The rainfall has been historic and temperatures are running well below normal. Throw in some wind and you start getting a pretty good idea about why there have not been a lot of riders out and about. That said, if you pick your moments, things aren't that bad for the intrepid rider. The hardest part is just getting out the door.
Diane has had a full crew of family in town for the holidays and on the day after Christmas, her nephew Nicholas from San Francisco joined us for a little BDB ride. Nico acquitted himself quite well on his borrowed Huffy and was looking stylish in his new LiveStrong helmet. His little brother, Alex, and Aunt Sharon met us and took to the bridge afoot. There were a few people out and about, but not up to the usual post-Christmas numbers of new bikes and puppies that have become the norm on the BDB. 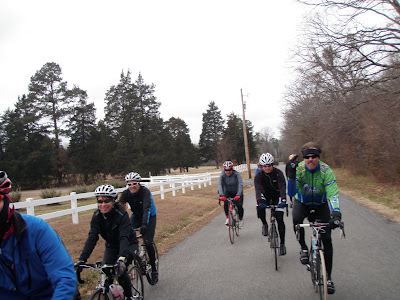 I also answered the call of Chris Irons and Company for a New Year's Eve ride to the Ferncrest area. About ten intrepid souls set out on a cool  day of about 45 degrees. The way the weather is shaping up for the next week, I'm looking back on 45 degrees and thinking, "balmy". It's always good to get together with a bunch of friends this time of year, even if some of them are a bit surly and  absent-minded about their helmet. In the dead of winter, the happenstance meetings on the trail are few.

I've expressed my emotional neutrality on mountain biking. In addition, I have a little disdain for I-pods, particularly when worn in pace lines or group rides, but also, to a lesser degree, in any situation where you might be expected to have any awareness of your auditory surroundings. I continue to chuckle at people on the trail who so isolated by their tunes that they jump and squeal when a rider passes by, though the rider has been calling out to them for the last thirty yards of his approach. I've had to go so far as to tap people on the shoulder to let them know I was passing them.
Simple, unsolicited advice: Turn it down.


OK, here's my confession: I really like plugging in my ear buds and getting out on single-track. No cars to worry about and I've mostly been riding by myself, though there's not much opportunity for conversation , anyway. I think I just need to keep busy mentally. On the mountain bike, I'm in a near-constant state of "what next?", which occupies a significant portion of my capacity for reason. Some fine music serves as a good background for all that brain work. On the road, "what's next" may be a turn ten miles up the road or the decision to cross the BDB or not. That leaves room for the mind to wander. That, and I've felt really uncomfortably unsafe anytime I've tried tunes on a road bike.
Maybe I'll find mountain bike love after all.
Posted by JBar at 10:05 PM

Bad form sir. Headphones/earbuds and bikes ONLY go together indoors on a stationary trainer. Please rethink...

While I appreciate the sentiment regarding I-Pods, I will say that I entered the dark world of ear bud isolation only as a hope for a cure for MTB aversion. The treatment has had positive results, so I'll continue applications.

While on the topic of "bad form", bikes do not belong indoors except for purposes of storage or maintenance and repair, and the term "stationary trainer" should be reserved for the lazy employee at the athletic club.