I did my usual Christmas Day ride to the in-laws' house and in doing so checked out the River Trail. It was all ridable, though I did have to dismount to step over a fallen tree across the trail just east of the Burns Parks woods. 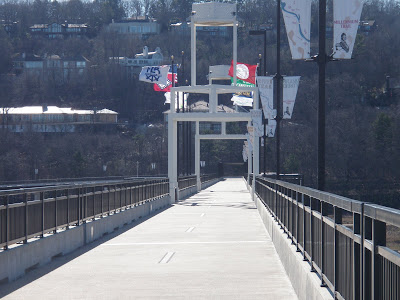 On most Christmases, the Bridge is busy with folks who are test-driving either new bikes or new puppies. The day was sunny, but cold, windy and generally harsh, so I had things pretty much to myself. 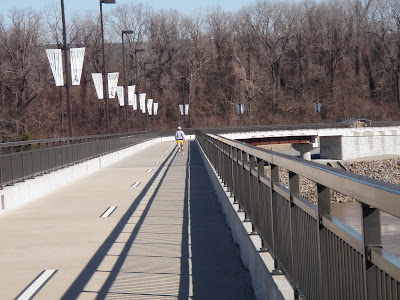 This young lady apparently didn't get the memo concerning the temperatures and wind, as she was strolling in a pair of gym shorts and a sweat shirt. 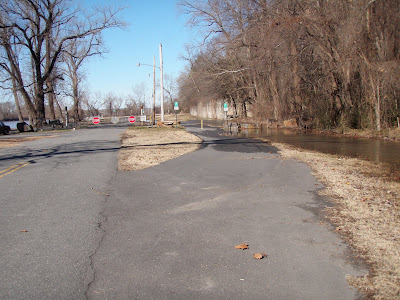 What a difference a day makes. The trail into the quarry drained quickly once the rain stopped. 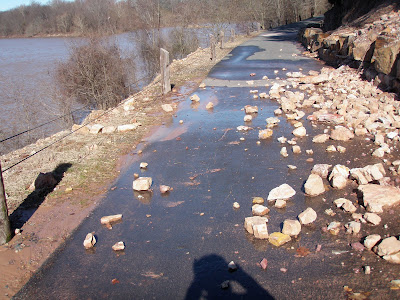 I stopped and moved enough rocks to ride through this rock fall; only to be stopped by a fallen tree about 100 yards up the trail.

A large dock had broken away from Maumelle Creek and drifted downstream into the I-430 bridge. I stopped and spoke to one of the boat owners who was sizing up the salvage job. He said that several boat owners, including some folks who live on board, were trying to secure things as the creek went into flood. The dock that his boat was on broke loose and drifted downstream, breaking off the piers that secured the wayward dock, which headed downstream with several boats still in slips or tied alongside. A large cruiser and a houseboat got loose and were tied off to the river bank on Christmas Day and another dock had run aground on a sandbar off of Two Rivers Park. 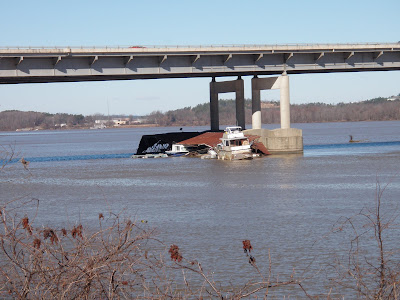 The highway department inspected the bridge and determined that it had not been damaged by the dock strike. Clearing the mess is the responsibility of the dock/boat owners. They've got a job to do! The river is high and should continue to rise for a day or two.