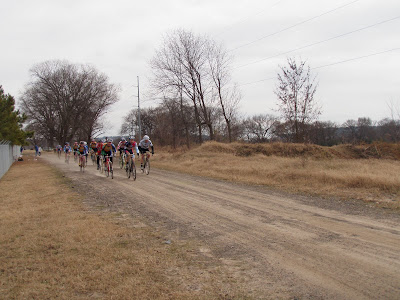 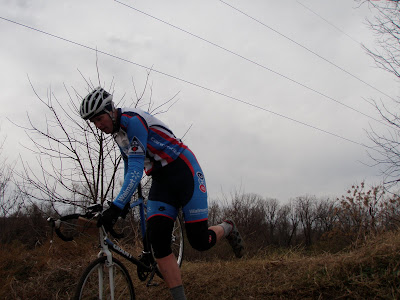 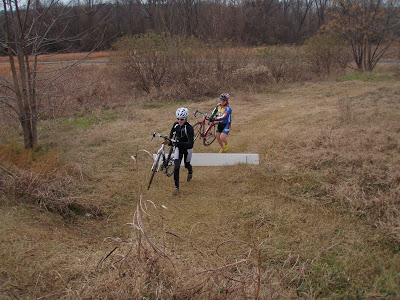 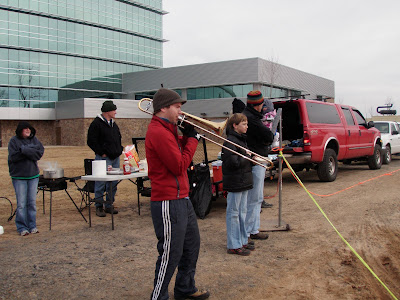 Klein Rots Cyclo Kruis
AR Cyclo-Cross State Championship
Presented by Competitive Cyclist www.competitivecyclist.com
North Little Rock, Arkansas
The weather was perfect as the temperature was struggling to get out of the 30's, the breeze was harsh and skies were grey. Beer was discreetly flowing at 11:00 AM, french fries were being doused with...Mayonnaise?, cowbells were clanging, and a trombone was bleating out a tune normally associated with Oaklawn Park horse races! They're at the starting line and....they're off!

Cyclocross racing has come to the River Trail with a load of Belgian tradition in tow. Those folks love their bikes, beer and papas fritas with mayo. Every little berg has a race team and the best riders are local heroes. Road champions like Tom Boonen are true national celebrities. The weather is crappy by definition and almost every pro cyclist has paid his dues with a season or two eating mud and dung on the cobbles, learning just how tough you have to be when racing against a bunch of boys whose other career choices often consist of the mill or the mine. Cyclocross is the focus for some riders and off-season conditioning for others.

Sponsored by Competitive Cyclist, I believe the Flemish mouth full above translates into "Little Rock Cyclo Cross". I've got to admit that as a spectator sport, cyclocross is a clear winner.The mood was festive and I was surprised at the number of experienced 'cross riders on hand, many of whom had traveled for the event. I hope that we will see more. I can envision bigger events and a friendly, rowdy crowd making for a whole lot of fun! From what I was hearing, the course could use a little refinement and much more mud, but it seemed to be a great start. 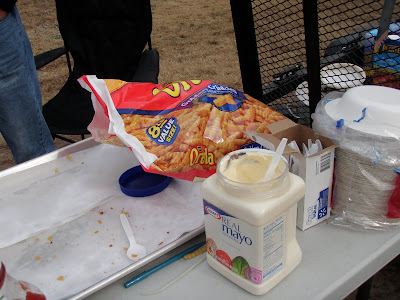 I like French fries. I like mayo. I'm not sure about the combo, but a few hundred thousand bike-loving Belgians can't be wrong! I'm sure it sticks to the ribs and is probably good fuel for standing for hours in cold blowing rain, while guzzling good beer and cheering on your favorite riders.
Posted by JBar at 5:58 PM

Man, bike racing, beer and french fries. They should name this Cyclo Chris. That is my kind of fun.