Diversity Along The Trail 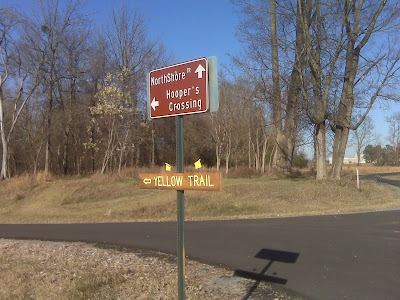 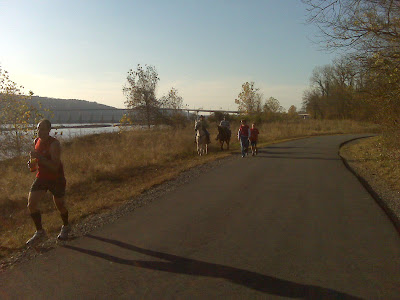 No, we're not talking about gay pride, racial harmony, English as a second language, or the acceptance of regular Baptists by Southern Baptists. That's just too much hair-splitting for me to get into here, where folks are folks as long as they're not some sort of asshole, and we don't bother to sort that breed along cultural lines.
We're talking about horses. Though we have seen the occasional nag along the trail, only recently have signs gone up designating an equestrian-specific route marked as the "Yellow Trail". The Yellow Trail includes a mowed grass path through the deer fields to the Hooper's Crossing/ ADEQ area and the Pfeifer Trail and ties in to existing trails from Burns Park. Gene and Linda Pfeifer have donated much of the park land in that area and share a love of cycling and equestrian activities, so I get the connection. There have been conflicts between cyclists and horse riders in many shared venues, usually public lands where the horsemen wish to exclude what they regard as johnny-come-lately mountain bikers. I would not expect any friction here,especially since most of the horse trail is off the pavement, but let's make it a point to get along. My position on trail users it that we are all allies and have a common cause. If you ever feel compelled to complain about your fellow users, just remember that a broad base of users means more trails, better maintenance, more bridges, and wider acceptance of cycling. I covet every inch of the River Trail and want more.

I have two concerns about horses:

1) The Hooper Crossing bridge is rated for 1000 pounds. The average "light" riding horse happens to weigh about 1000 pounds. I actually looked this up. I hope for single-file horses while I'm on the bridge.
2) We've got little bags for dog owners. Might I suggest a couple of shovel stations?
Posted by JBar at 6:52 AM

My thought is that the Yellow Trail might be be more appropriately named the Brown Trail!!!