This Was Going To Be a Week Off The Bike, Then...

Thursday, January 7
Temperature: 27 and Falling Wind: NW 23-31 MPH
It was a harsh day outside, and that message had been echoed over and over by every talking head on TV. I passed on the noon ride bunch and on the later invitation from a buddy to ride today. Too busy, too cold, way too windy. Day done. Written off.
Then, my neighbor Darwin called. I know better than to use a phrase like, "If you're riding...." with Darwin. He doesn't call just fishing for possibilities. He's going riding, and 15 minutes later, so was I.


Riding from the sub, we headed straight into the wind. We've all been there, that "WTF was I thinking" moment, but we settled into a rhythm and ground our way upstream. We were both a little overdressed, actually, with Darwin shedding a layer and me preferring to suffer a little perspiration, given the conditions. It's really not too hard to dress warmly for the bike. Hands and feet are the biggest challenge and I can address that by grabbing some old ski gloves for the hands and I sometimes stuff chemical foot warmers between my shoe and shoe covers for the feet. The warmers are good for a couple of hours, which is usually enough when the weather is cold enough to call for them. Another option is to pull some old socks over your shoes and cut out holes for your cleats, then put shoe covers over them. 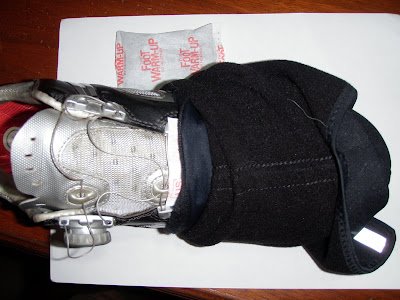 These little warmers can make a big difference. They won't fit in my bike shoes, so I tuck them in the shoe cover.

Friday, January 8, 2:00PM
Temperature: 23 Wind: NW 12-18
OK, it's really cold. I've made a few sales calls and retreated back to work in my basement office after making myself a sandwich.
Then, my neighbor Darwin called........and we were off again.

We got in a little over an hour on the bikes and I got back to my office with cold toes and with a few calls to return, but it was well worth it! 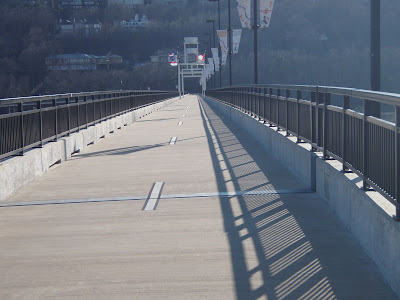 The flags were still straight out on Friday, but the wind was nothing like the action on Thursday. Note the crowd. 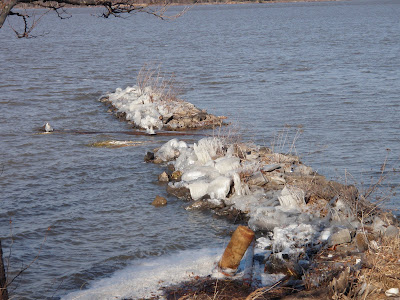 This jetty was ice-covered on Friday. On Thursday, the wind was driving some big waves down the river, making for freezing spray.

At some point, I will just say, "Too cold!", but Darwin seems to be able make this stuff sound reasonable enough to lure me out. Our coldest outing to date was a few years ago when we headed out in 17 degree weather after having been ice-bound for a week or so. We rode about 30 miles, included a few detours around still-frozen hills. Riding ice-covered streets on a road bike is sketchy at best and touching the brakes is ill-advised. Of course, after spending a few decades willingly getting out in icy waters in a kayak, my take on "reasonable" is pretty broad when it comes to dressing funny and going outside. At least on the bike, you're dry.


We're fortunate to be able to ride year 'round here in Arkie-land. Even our most extreme conditions are fairly moderate in the grand scheme of things. Often, the hardest part is just getting yourself out the door.