JRA is the most common cause for component failure on the bicycle. Ask any wrench for the most common explanation of events preceding a breakdown or a crash and you'll find that most stories start with, "I was just riding along...."

Well, this morning, Saturday, we were just riding along, a group of around thirty riders on the Saturday morning CARVE winter cruise to Keo and back. The pace was relaxed, the conversation pleasant, the weather was acceptable and the double line was operating steadily and smoothly. Then, with absolutely no warning, a rider ahead and to my right was thrown to the pavement, the rider behind him slammed hard into the still-in-motion carnage, followed by the impact of a third rider who, I swear, looped head high as he piled into and over the train wreck that had just exploded across the road.
The cause of the wreck was determined to be a small pothole in the road that was narrow but deep, just perfect for snagging a wheel and Paul, who was the initial victim, had taken a drink and had his water bottle in hand. I'm not sure if things would have turned out much differently otherwise, as, unless warned by leading riders, these small but potent hazards come at you in a hurry when riding a paceline. Other than that one odd little slot of a hole, the pavement was smooth and in good shape on that stretch of road. 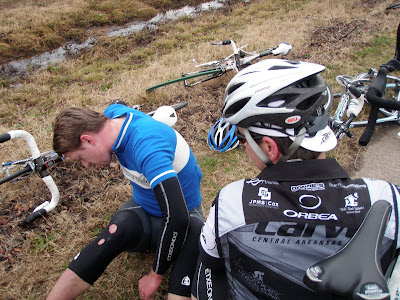 Paul suffered the worst of it with a banged up hip, knee, elbow and shoulder, along with some back pain. 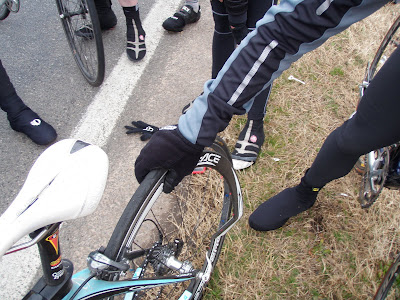 Hmmmm....I think your wheel is a little out of true. Might need to loosen the brake a bit. Suzanne, who was on Paul's wheel, was OK but her bike looked like it had been dropped from a roof, with the bars askew and the sweet DuraAce carbon rear wheel tacoed. I figured that the damage to riders would have been worse considering the violence of the crash, but Suzanne and Cody the flying boy were seemingly uninjured.

We left Suzanne and Paul waiting for a ride and headed on back to town, part of the group having already gone ahead of us. To add a little exclamation point to the day's events, I banged into a little hole on a rough stretch of Faulkner Lake Road and had a pinch flat, myself. I told everyone to go on as I had two tubes, 3 CO2's and my inflator, but some of the boys insisted on sticking around. I'm glad they did because there was a seal missing from my ultra simple, very reliable MicroFlate and I would have been quite screwed.

It just goes to show you that stuff can hit the fan at any moment, especially on a group ride, where incidents seldom involve a single rider. And even though I felt that I was completely prepared to deal with any flat situation, it pays to have friends on the road.
Posted by JBar at 4:49 PM