There is an open public comment period that ends on Monday, April 22, 2013. The local cycling community continues to lobby for pedestrian walk and separate 5' bike lanes in each direction on the proposed new bridge versus the current plan for a 16' multiuse lane. The concern is that the new bridge will never be considered a serious
alternative for cycling as transportation or that cyclists will simply take to the traffic lanes. Due to the ramp configuration, riding the traffic lanes, particularly from north to south, will be inherently dangerous. The bridge is being touted as a veterans memorial and as an regional attraction. If that concept is successful, then the bridge's pedestrian/bike feature will become a promenade on which bikes will mix with meandering visitors. Here's how you can learn more and voice your opinion:

Change.org petition: click the link, express yourself, and electronically sign the petition. Change.org petitions are an easy and pretty effective way to support a cause.
Highway Department Comment Form: follow this link and you can opine on the lanes as well as have input on paint colors.

Big George to Ride the BDB100
George Hincapie has signed up to ride this fall's BDB100. I started to post this a week or so ago, but the third person to tell me also informed me that it was still a secret. I'm not sure if he's promoting his line of clothing, just riding , or here for some other reason. Most cycling fans will recall George as Lance Armstrong's most reliable lieutenant, the finisher of 16 Tours de France (3 were later disallowed), and more recently as sprinter Mark Cavendish's shepherd and mentor at Team Columbia-Highroad.
Hincapie's image has been tarnished by confessions of doping while in the service of Lance Armstrong at US Postal, but most fans and riders still consider Big George to have been one of the nice guys of the peloton and a tireless competitor.

Bike Check: Tires, chain, and cables
It is easy to ignore bike maintenance over the course of the winter when, for many cyclists, rides are shorter, less frequent, or nonexistent. When spring comes around, we're more interested in saddle time than in shop time, and the miles can pile up on the equipment. I'm pretty conscientious about bike upkeep, but even then sometimes things get overlooked. 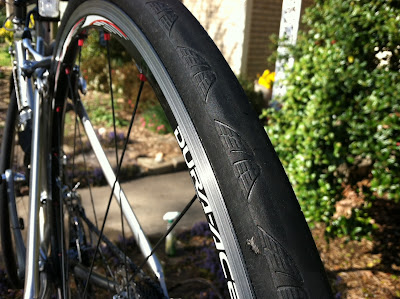 A damaged sidewall like this can precede a blowout and is better discovered on the work stand than on a high speed descent.
A clean, well lubricated bike is a happy bike, and cleaning your bike allows you a good opportunity to check things over. Last week, after having navigated the gravel along the tracks near road repairs at River Mountain Road, I noticed that I had damaged the sidewall of my rear tire. I could have booted it, but the Continental GP4000S had over 3000miles of rear tire duty, so it was replaced. The rear tire gets much more wear than the front, so my practice is to move the front tire to the rear and replace the front with new rubber. I regularly get 5000 miles out of a Conti this way unless it suffers damage beyond normal wear. Never rotate a rear tire to the front!!
Many riders never give their chain much attention beyond cleaning and lubrication (some don't do that, but that's another problem), but it's good policy to check your chain for wear. Most bike shops do it as a matter of course when a bike is brought in for service, but it's easy to check yourself with a chain check tool or with a simple 12" ruler.
From Performance Bike:
Measure chain wear. Place a 12 inch ruler along the bottom chain run, align the 0 mark with the center of a chain rivet. Note where the 12 inch mark aligns on a rivet. If the center or the rivet is at 12 inches the chain is new or nearly new. Off by less than 1/16" and the chain is showing some wear but is still serviceable. If it misses the 12 inch mark by more than 1/16" the chain requires replacement and the rear cogs should be closely inspected. Worn cogs on a new chain will typically cause the chain to jump or skip in the worn out cogs.
Cogs wear along with the chain, so that a new chain will not perform with a worn out cog set. Ignoring a worn chain will result in the purchase of a new cassette when the chain is finally replaced. Eventually a worn chain will start skipping on some cogs, but will often cause sloppy shifting long before then as the chain loses lateral stiffness.
Cables
Shifter cables can fail one strand at a time, causing uninitiated shifts as the cable gives out before eventually failing out on the road. The most common symptom is phantom shifting to smaller cogs on the rear cassette, as the front shifter cable get the most wear.
Changing cables is not hard, but unless you have a cable cutter and are comfortable adjusting you derailleur, let the bike shop guys do it.
Most of us have had enough flats to consider ourselves capable, but if you are not confident in your abilities, a busy roadside in the summer heat is not the place to figure it out. I noticed that  Chainwheel still offers free flat clinics on Saturdays. "Free" is a hard price to beat, so I'm sure they would allow you to buy something while you're there.
From Chainwheel: