Along The Trail: Some Projects Are Going Better Than Others

It has been over three months since a culvert collapsed under the road into the Two Rivers Bridge parking area from River Mountain Road. After an initial statement that it would take 6-8 months to fix, city officials gave a more realistic (we thought!) estimate of 6-8 weeks. Given that it was a culvert under a dead end road on city property, even that seemed like an extraordinarily long time, but it was explained that the line had to go under the adjacent rail line, so it was more extensive than just laying a pipe and patching the road. Then the RR decided that they did not need to take action. Weeks went by with no activity and then it was explained that a fiber optic line needed to be moved and that after that action, the contractor would have the work done in 7-10 days. The fiber optic line was moved a couple of weeks ago and the contractor finally went to work. In the meantime, trail users have been incensed by the delays and the lack of any accommodation to provide passage through the area as the site sat largely untouched.
Now comes the news that the railroad has decided that they, indeed, do have a problem and they will need to replace a culvert under the tracks. The result is that trail access will be compromised for another month, and that the user-blazed trail along the tracks will be blocked completely. 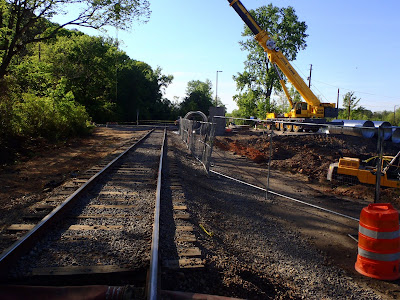 Cyclists and walker have regularly detoured around the construction zone, which has been newly-expanded this week as actual work began. My understanding is that this stretch of RR track will have to be removed as a new culvert is extended under it. 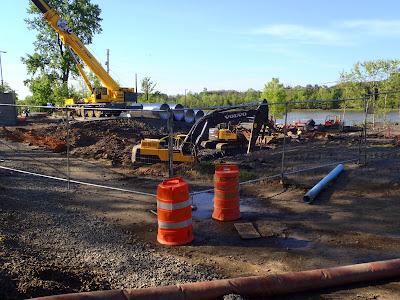 In The Meantime, Buddy Has Built A Mountain
Well, a hill, anyway. Work has progressed at a rapid pace on a plaza area being built by Pulaski County in Two Rivers Park. 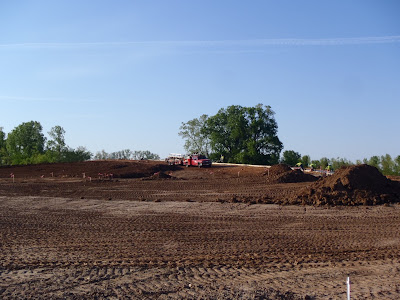 I haven't seen the plans lately, but my understanding is that the plaza on this site will include benches, a sundial, and other decorative and practical amenities to provide an attractive gathering place for park visitors. 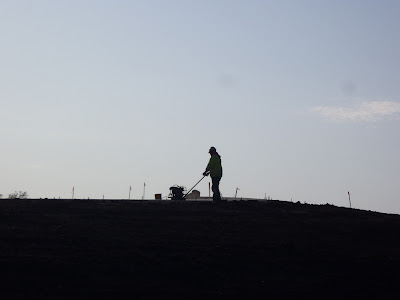 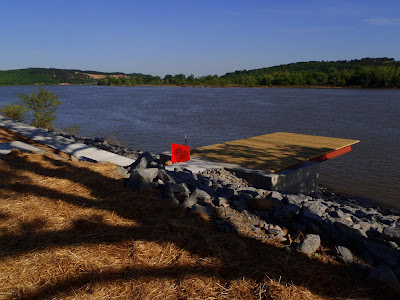 This kind of makes me want to wet a line or just sit in the sun and let the river flow by.
Hopefully, the River Mountain Road access problem can now be completed according to the revised schedule, but past performance does not give me much confidence. This is a key access point for cyclist coming from the neighborhoods of west Little Rock. The alternatives for riders are to ride several miles out to Pinnacle Valley Road and come in through Two Rivers Park or to risk a trip down Cantrell Road to get to Rebsamen Park Road, a route that even the most confident commuters would not dare to attempt.
Of the three primary governmental entities involved in the River Trail in Central Arkansas, North Little Rock and Pulaski County simply seem to be able to get things done. Little Rock, in spite of having some really good people in key positions, just has a hell of a time getting a handle on the tasks at hand and, perhaps more vexing, they can't seem to provide realistic information. Granted, the River Mountain work is an unforeseen repair, but, unless I'm missing some key point, it is just not that big of a deal. When the I-40 bridge collapsed into the Arkansas River in 2002, traffic resumed in 2 months. I would have thought that we could get a culvert replaced in a similar timeframe.
Posted by JBar at 11:02 PM

Since the railroad track which is used at least once daily will be shut down while the culvert is put in place, I am optimistic that the work will progress at a quick pace.

I don't get out there much lately, but appreciate your posts keeping up to date on what is happening with the trails.

Report from the weekend: There were 3 backhoes, 1 bucket loader, 2 sump pumps, and lots of guys hard at work on Sunday (Sunday!) afternoon. I think getting the railroad involved has definitely kicked this into high gear.

They have removed the railroad tracks. The heavy machinery has actually dug down so far that they are below the roadbed level. I suspect some crane work will be needed to get them out.