Along The Trail: A Slow Start


The riding season is very slowly sputtering to a start here in Central Arkansas. Like most local cyclists, I've been doing more sputtering than riding, so there has been little in the way of inspired writing in this space. Sorry about that, folks, but I know that my tales of two consecutive Saturdays of garage organization would be of little interest but, hey, let me tell you about the great new shelf I put up over the kayak rack!! Admittedly, I did stir a little curiosity from the house when I fired up my chainsaw, a big ol' 20" bar Husqvarna, to cut some 2x4's to length. Not my finest work, but my two circular saws and chop saw are all currently residing at the river place and I was not to be constrained by the lack of proper tools.

Last Sunday afternoon turned out to be fine after a rainy morning, and the pent up demand for fresh air and sunshine was apparent as the River Trail came to life with riders and walkers. Monday evening was predictably sunny with comfortable temperatures and trail traffic was heavy as many small ride groups gobbled up some miles ahead of a forecast for a few more days of rain and cold, with temperatures about 20 degrees below average. I've been trying to curb my whining, but it is becoming difficult. 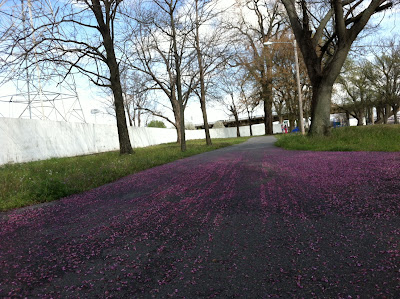 The redbuds are leading a life parallel to the riding season. Just as they started to bloom, they were hammered by the cold rain.
Trail developments
As is usually the case, there are ongoing improvements along the trail. I'm all for smart development and here are a few things that take advantage of some available space without having to clear a forest.
Two Rivers Plaza 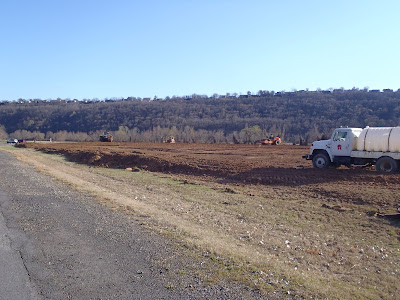 Work is underway on the Two Rivers Plaza II in Two Rivers Park.
Judge Buddy Villines rolled out the plans for this area a couple of years ago. I hope that it turns out to be as appealing as the conceptual drawings, which depicted an attractive plaza with benches and shade that could serve as a centerpiece for this area of the park.
Burns Park Fishing Pier 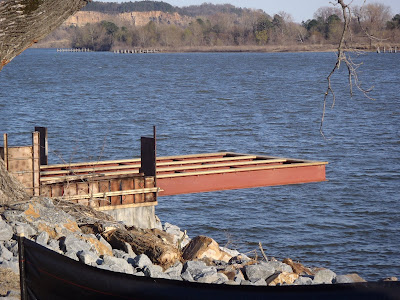 The fishing pier near the soccer fields in North Little Rock Burns Park is shaping up.
I have a few concerns about cross-traffic and litter in the area, but I think that the pier will get a lot of use by fishermen and other folks who just want to enjoy a perch over the water.
Add A Fixit Station 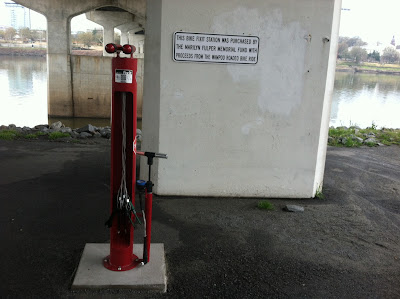 This Fixit Station was purchased by the Marilyn Fulper Memorial Fund with proceeds from last year's Wampo Roadeo ride. It is located beneath the Main Street Bridge in NLR Riverfront Park.
Update On River Mountain Culvert Repair
Little Rock Assistant City Manager Bryan Day advises that a fiber-optic line has to be moved before construction can get underway.He was hopeful that the line could be moved this week. Repairs to the culvert and road should then take about 10 days after the line is moved. I don't want to paint Bryan into a corner, so keep in mind that dirt work is weather dependent and that the weather is going to suck for the next few days.
Park and trail users have been frustrated by the slow progress on this project, but it involves utilities and a railroad, neither of which shine when it comes to hurrying.
The first training ride for the Carti Tour de Rock is this Saturday and the group rides will be popping up like mushrooms as soon as the weather straightens out. Summer will come!
Folks, that's all I've got.
﻿
Posted by JBar at 10:06 PM