Following a request from BACA, the AHTD arranged for a temporary passage for cyclists in the area of construction near the Episcopal Cathedral School. 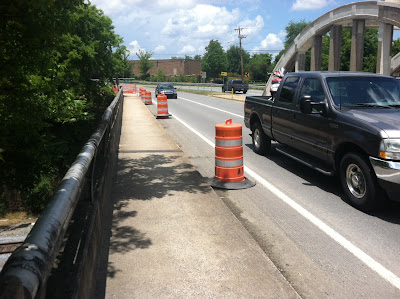 The sidewalk over the Union Pacific viaduct is always far from ideal, but it beats the alternative of riding Cantrell Road. 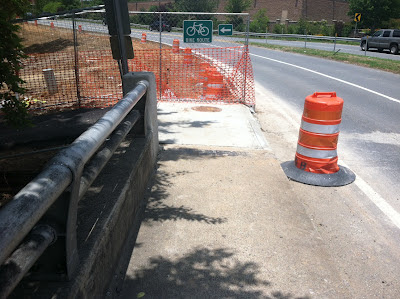 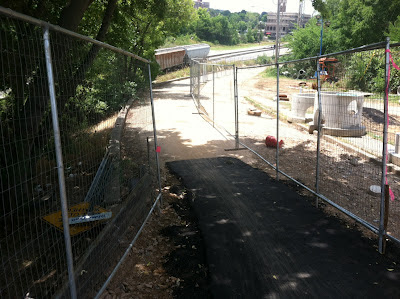 This arrangement resembles a cattle chute, but will get you to North Street and beyond.

Get On Board
This story is part of the larger tale of the ongoing problems associated with getting a legitimate bike-pedestrian route past this stretch of Cantrell Road, but the point I'm trying to make has more to do with a small success in bike advocacy. Tim McKuen and BACA engaged the AHTD and made a well-reasoned request for a compromise. I believe that the positive result was a product of an aggressive but thoughtful approach by BACA and changes in leadership and attitude at the highway department. I hear from quite a few folks expressing their ideas, opinions, and complaints about the state of cycling advocacy in Arkansas, Little Rock, specifically. Some think that BACA, the City of Little Rock, and the state should be moving much more quickly than they are, a position with which I cannot disagree, but, folks, have patience. There seems to have been a momentum shift in recent months and it favors us. You can help keep the ball rolling, especially in Little Rock, by joining BACA, contacting your city director, and by attending upcoming ward meetings in Little Rock. Aly Signorelli has gathered information on those meetings. I will find it, or perhaps she will post that information in the comments associated with this post.

Back when I was much younger and a little more full of myself (yes, that's possible), our warehouse manager failed to get some product shipped after I had promised the customer that it would go out. When the customer called the next day and I discovered what had happened, I told my customer that I would go chew the warehouseman out and fix things. My customer, Conward Allen of Harrison, said, "John, don't you think it would work better if you just asked him real nice?" I was every bit of 22 years old, but that lesson stuck. I've found that my best approach in dealing with almost everyone is to start with something like, "I've got a problem and I'm hoping that you can help." The most common response by far is, "What can I do for you?"

I relate this little story because this approach also applies to government administrators and politicians. If you contact your city manager or others, I suggest that you start out by asking for their help going rather than belaboring past problems. Most people by nature don't want to hear complaints but they find it to be empowering and gratifying when they help someone. Unlike more divisive or partisan issues, there are very few people who are "against" cycling, so most leaders are at least willing to listen to ideas on the topic with an open mind.

Yes John, Aly passed along that information and the schedule is listed on the BACA website here
http://www.bicycleadvocacy.com/5/post/2012/07/little-rock-street-and-drainage-meeting-schedule-set.html
The Meetings are coming up quickly. It has been postured that attending as many meetings as possible, not just your own ward, would be helpful. Just remember to be polite and constructive.

Things are getting much better in Central Arkansas because of BACA. As soon as we can get a state-wide advocacy group and good attendance at the Bike Summit in DC from areas surrounding Central Arkansas---things will get better. Patience is the answer---Hard to have in this era of fast food and instant gratifacation!

Great writeup and BACA also did a great job getting this issue addressed!