Get Up! Get Back Down Again.

I was very excited last Thursday morning in anticipation of  a visit to the hand surgeon and the removal of the splint and bandages that I had been sporting for 2 1/2 weeks. I wasn't certain of an immediate return to the bike, but this was to be a big step. The nurse cut everything off and started talking to me about my physical therapy schedule; a topic that had never come up when I had asked about my recovery time, but that made sense as I found I had very limited range-of-motion in my repaired right thumb. At about that time, the surgeon popped in and said, "Don't move that thumb!" as he instructed an assistant to put me in a cast. He said that he was doing it "to protect you from yourself" as he suspected that I might attempt to resume normal activities. Probably a good call, but.....when I had asked about my post-op condition, all that was mentioned was "bandaged for 2 1/2 weeks". I may have been naive about the complexity of my situation, but I think that 2 additional weeks in a hard cast and weeks of physical therapy should have been worthy of mention. I'm confident that my  doctor, a noted hand specialist, knows what he's doing, but I would have appreciated his sharing the plan. After a few moments of anger, disappointment and frustration, I resigned myself to the process, only to find that the new cast was painfully uncomfortable. A few hours later, I was back with the technician getting it sawed off and replaced by a better fitted one. Though it looks orange in the photo, it is actually red, so it at least allows me to accessorize in a favored color. 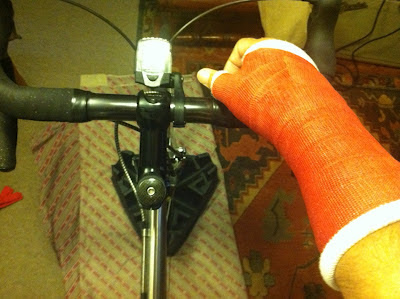 It has come down to this! My fine elegant Litespeed relegated to the trainer.It is a sad sight to behold, but the dust on the bar tape and the cobwebs apparent in my first pedal strokes told the tale of necessity.

My optimism for a speedy return to the bike has been somewhat dampened, but I hope to be on the bike for 3-4 weeks prior to the MS150 on September 8 (More on that  later, but it looks to be e very cool ride!). From there, I hope to gather enough fitness to hang with my buds on the BDB100. If that plan doesn't work out, I'll keep coming up with another one until I'm back on the bike and up to cruising speed.