The Politics of Pedaling

Since I have been off the bike and out of circulation for the last couple of weeks and working long hours, the past Wednesday marked an opportunity for me to get some current exposure to a couple of facets of our cycling community. At lunch, I attended the monthly meeting of the Little Rock Bike Friendly Community Committee at the River Market, then on Wednesday evening, Diane and I set out for the BACA meeting at the Capital Hotel. Many of the same topics were addressed in slightly different contexts at both events, so I'll do a bit of a "meeting merge" here.

The River Trail link closure near Collegiate School was a fairly hot topic at the LRBFCC meeting. Obviously, neither the contractor nor the  AHTD  felt it necessary to notify trail users of the impending closure. It demonstrates clearly that the AHTD has no notion that cyclists and pedestrians are actually engaged in transportation. This stretch of trail is a bit of a sphincter with no easy way around; otherwise, we would not be involved in the protracted debate over "closing the loop". The city was going to try to get some signs up so that commuters and other riders would at least have some warning that they were headed to a dead end. Committee chair Ed Levy, a commuter, was a victim of the trap as he made his way to work, but was able to cross the construction zone. BACA drafted a resolution asking that one of the three open traffic lanes be made into a temporary bike lane. This was deemed impractical by the traffic folks due to the fact that lane closures will occur at night and will be shifting during the course of the project. I did not come away with a timeline on the trail reopening, but my impression was that it should be ~ 10 days. There is plenty wrong with this situation. There was ample time to make provisions to at least notify the public or, at best, make some provision to accommodate trail users. I covered it here back in April and the project was discussed with city officials at the LRBFCC meeting and the then AHTD bike-ped coordinator at that time, though I've come to find out the the AHTD doesn't give transportation alternatives much consideration. Hopefully, that situation will begin to change.
I INTERRUPT THIS POST FOR BREAKING NEWS!

Also: http://www.arktimes.com/ArkansasBlog/archives/2012/07/12/thursday-night-line
"There has been some communication between Scott Bennett and Tim McKuin, who is the president of the Bicycle Advocacy Group of Central Arkansas (BACA). BACA’s board asked if the Department could use the southernmost travel lane of Cantrell as a temporary route for the River Trail in the construction area.

Our Assistant Chief Engineer for Operations Emanuel Banks and our District Six Engineer Mark Headley went to the job site yesterday morning to meet with the contractor to discuss what could be done to accommodate bike traffic. As a result of the BACA group’s request, the Department has decided to allow the contractor to make some sidewalk repairs and temporary asphalt connections to allow bike traffic to continue to use the trail during the project. Also, some fencing will be put up to separate the bikers from the work area. Work should be done within a week on the asphalt and fencing so that bikers can return to the trail."

Folks, we definitely have a new BACA working for us! Go to the site and join. The new leadership is taking action and needs your support!! 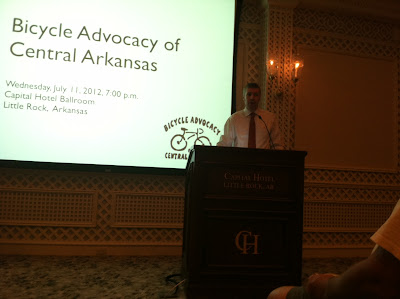 Mayor Mark Stodola was the featured speaker, Judge Buddy Villines spoke informally, and District 38 State Representative John Edwards attended and visited with many members. Joe Jacobs of ArkansasOutside.com showed off the new BACA website at http://www.bicycleadvocacy.com/ . Joe does a great job with his site and has vastly improved the presence and functionality of the BACA site, even snagging the bikeadvocacy url, wich was remarkably available. 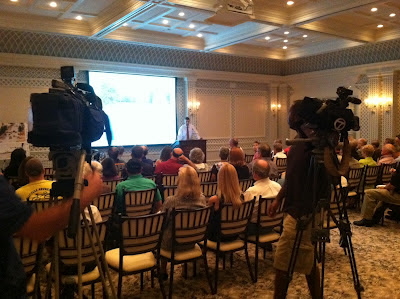 KARK and KATV both had camera crews to cover the event. 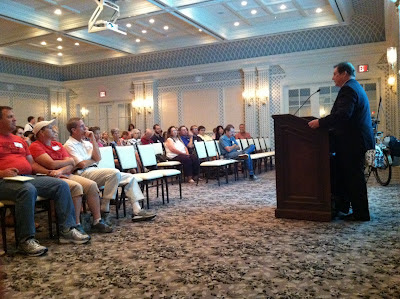 Little Rock Mayor Mark Stodola largely told us what we wanted to hear, and I am somewhat enthusiastic. Only "somewhat" because many of the promises have been made before.

Decorating the tree
A close friend with considerable political experience would have described Mayor Stodola's lobbying as "decorating the tree"; the practice of politicians offering up something shiny to constituents or lawmakers in an effort to gain their support of a broader package. Mayor Stodola offered up the possibility of financing for the River Bluffs trail segment behind Dillard's HQ, and mentioned plans for "road diets" which would reduce portions of So Main and 12th Street to three lanes to create space for bike lanes, and reminded us of the already-promised repaving of Rebseman Park Road. The repaving project is to come from the recently approved sales tax increase, while the Dillard's project would require a new source of financing due to failures in attempts to get federal transportation grants. Stodola is offeringthis up as he is asking our support for the continuation of a property tax millage that is set to expire soon. An upcoming vote would reduce the rate of the tax from 3.3 to 3 mills and generate $104m for street (to include trails) and drainage projects. I'm not a Little Rock resident, but I would be supportive of the act. Little Rock can be a better city but it takes money. I would also suggest that supporters of alternative transportation get out to upcoming ward meeting and get in touch their director. These folks respond to voters!

News from the Judge
Buddy Villines announced that a ribbon cutting for the new SW ramp of the BDB will take place at 9AM on August 1. He also mentioned that towers similar to those that grace the BDB (where the flags are) will be added to each of the ramps. Each ranmp will be closed for some period of time including the north ramp. I have asked for some clarification on whether this will mean round-the-clock closure, as the north ramp closure would prevent crossing the bridge. I'll update this if and when I get clarification from the county.

We are so lucky to have people like you willing to put in time to research, make calls and inform us of what's going on out there on the most popular cycling and pedestrian trail in the metro area. Thank you.

Please give me a heads up, if you can, before the next meeting or forward me a newsletter so I can sign up. Im ready to learn, advocate, and of course Vote!

Thank you, Lisa! I'm looking forward to getting back on the bike soon so that I can get back to relating first-hand views!

Julie, follow the BACA link in the article above and you can get hooked up. BACA has exciting new leadership and they can use the support of folks like you!

Even though, there's some growing pains. Tim and the new BACA are doing a great job and taking BACA in a great direction.