Sunday was the date of the CARVE-sponsored Dr. Feelgood Star-Spangled Classic/ State Criterium Championships and, like last year the day was forecast to be a scorcher. Knowing that shade is at a premium, I headed to downtown North Little Rock at about 6:30 AM with my Wal-Mart pop-up shade shelter, a couple of lawn chairs, and a cooler loaded with a case of bottled water and a few choice Colorado IPAs. I set up along Riverfront Drive, not far from the finish line and strategically close to the PCI-sponsored super grill, manned by Andy Hight, the solar power station and the industrial fan to which it supplied juice, and to the kiddie pools. I took advantage of all of the amenities except for the pools which, though freshly filled with a fire hose from a nearby hydrant, looked pretty funky.
After setting up, I joined a small group for a ride out to Pinnacle State Park Visitor's. We got back as a small field of junior men was finishing up. 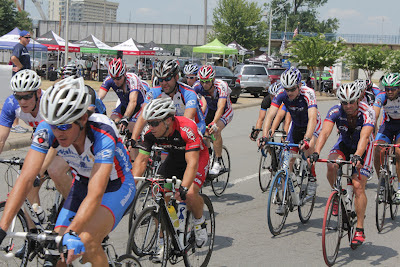 The organizers and sponsors did a great job and it looked like a big bike race. In addition to the team and store tents, Subaru had cars on display, podium girls and swag. Folks from the MS150 were set up recruiting riders for their event, the officials were well-equipped, the PA was good, there was plenty of food and beverage on hand, and the racing was fast!! 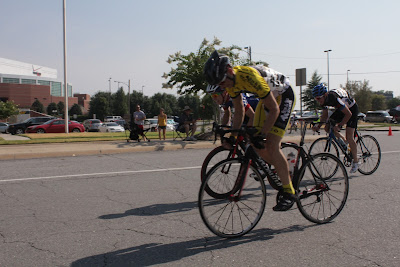 The junior men's 15-18 field was not too deep, but these guys fought it out to the end. 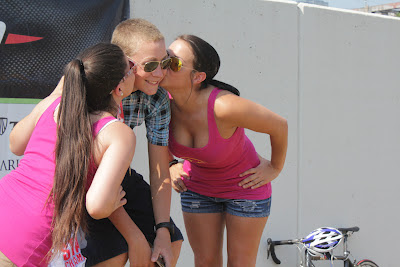 Ah, yes, a young man's fancy turns to bike racing....
The young guys were a motivated bunch and the Subaru podium girls helped put a smile on the winner's face. Oh, yeah, and he got a medal!

The races started at 8:00 AM with the younger Jr. Men and Jr. Women, followed by a full slate of men's and women's classifications, with the Cat IV men scheduled to go off at 4:30PM. The simple fact that there were racers to fill the many categories was a tribute to the success of the summer criterium series that culminated in this event. There was a good, enthusiastic crowd on hand, though I will admit to be among those who faded mid-afternoon and retreated to the AC. The racers held up remarkably well, most having been racing all summer, though the heat seemed to be taking its toll on the legs as the day wore on. 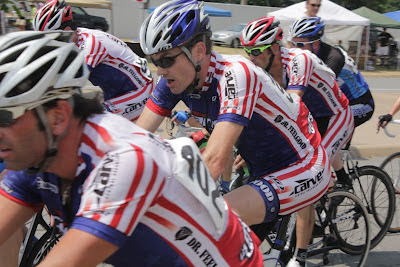 Master 30-45. As expected, CARVE was well-represented, along with BMC, Snapple, and local shop teams from Arkansas Cycling and Fitness and Spokes. 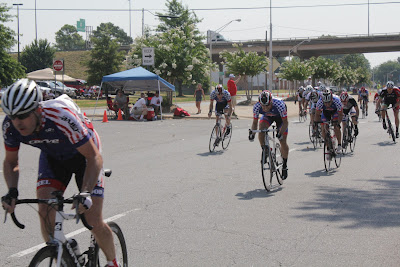 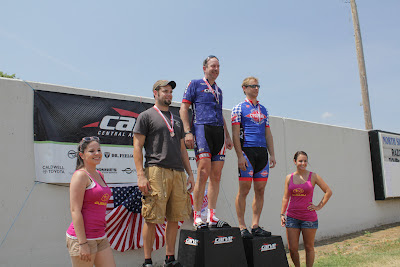 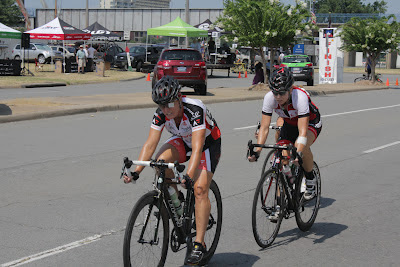 Though they could have used some more riders to share to work, there are some really strong cyclists among the women. 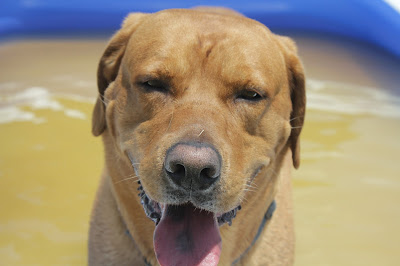 Though the water was a little discolored, the kiddie pools did not go unused. 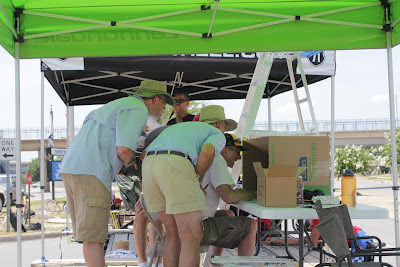 The officials sorted out some close finishes as MC Scott Penrod kept the action moving along.

The folks at CARVE have been doing a fantastic job of bringing racing to Central Arkansas, including the Crosswinds Classic road race and the recent State Championship Time Trials, attracting teams and riders from throughout the region. Along the way, these events are raising money for causes like CARTI and Teen Challenge. It says a lot about our cycling scene when  the community pulls together to support events like this one, and it put cycling in a very favorable light as we work to gain acceptance with the public at large.

I'll try get a link posted to the results when I can, and my friend Joe Jacobs is sure to have a more detailed report and a few thousand photos posted over at Arkansas Outside.