No Speed Trap: Radar Cop At The BDB

There was a little buzz last Saturday morning among riders on the River Trail concerning the fact that a NLR police officer was parked at the foot of the Big Dam Bridge with a radar gun, clocking riders coming off of the bridge. Contrary to what I was told by one rider, Officer Beaston was not handing out tickets, but was gathering data on the speed of riders as they came down the north ramp. 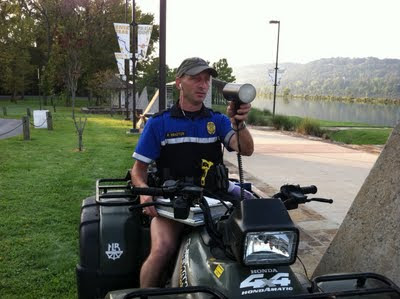 Though he was parked discreetly in the classic speed trap mode, Officer Beaston was just in the "information gathering" mode. He had clocked and noted the speed of about 300 riders, only a few of which appeared to be riding above a reasonable speed.
The study was prompted by a couple of recent cyclist-pedestrian accidents that resulted in injuries, one to the cyclist and the other to the pedestrian. Beaston is a rider and has done some racing, so his perspective on cycling was an informed one and, while I won't put words in his mouth, I will say that we were of about the same opinion as to what appeared to be safe and reasonable and what appeared to be irresponsible. North Little Rock officers have been present on the trail, either on a 4-wheeler or on a bike, the last few Saturdays and I think that's a good thing. The best way to get a feel for trail use is to be out there.
There has been a lot of discussion about sharing the trail of late, much of it centering on somehow controlling cyclists. In my opinion, folks cannot be forced to use good judgement. The speed limit on the I-30 bridge may be 65 MPH, but there are many times that you will get passed by almost every car on the road at that speed. There are also periods of heavy use when only a madman would attempt to maintain 65 MPH. The same principal applies to the bridges. There are many times when descending off of the ramp at 18-20 MPH is perfectly reasonable and other times when it is difficult to maintain 5 MPH, as was the case on Two Rivers Bridge last Monday.
On that note, there were very few what I'd call "serious" cyclists out Labor Day evening when I got to ride. The biggest hazards I encountered were the family of five with bikes parked sideways across the trail while Mom untangled her earbuds, the guy on the BDB with two dogs on 20' leashes, each extended in a different direction, and the oncoming runners who couldn't decide which side of the trail to run on, so they split up and took the whole damn thing. All of those are everyday occurrences on a shared trail, so I'm unlikely to do any letter writing to complain.
It's really not too hard to get along if you start with reasonable expectations and some good manners.
Share the trail. Share the responsibility.
﻿
Posted by JBar at 5:53 PM

Email ThisBlogThis!Share to TwitterShare to FacebookShare to Pinterest
Labels: Radar at the BDB

When I first started riding 5 years ago it was common to see NLR PD on the River Trail, but the last few years I noticed I hardly ever saw them. It's good that they are back out.

Transitioning off the bridges when their is a crowd is always difficult. As much fun as it is to use the incline I usually err on the side of caution and use my breaks to keep it at a manageable speed. I've crashed and burned enough.

Well said ... Speed is totally relative to traffic on the trail system ... I don't think common sense can be legislated ...

So, the nerd in me really wants to know the results of his data collection. What was the average speed, top speed, and minimum speed?

A large part of the issues are that people are not spatial aware. They walk and change direction w/o even looking to see if someone might be in the way.