Turning The Seasonal Corner
The days have been getting shorter since the solstice, but darkness will be bumping into my ride times soon, and some of my commuter friends have been sporting lights for a couple of weeks. A few folks are already pulling on armwarmers in the morning and the sun is slipping to the southern horizon. I don't mind the heat as much as the dark, but we can't pick, so we have to adapt. We have to return to our winter ways and that means getting out the winter wear and also getting visible. It's a good time to change the batteries in your blinkies and charge up the headlights. We'll be riding at dawn and dusk more often, which also means that drivers will be all the more challenged to see us.

Open House at the Boathouse
The Arkansas Boathouse Club invited cyclists to drop by last Saturday to grab a snack, fill bottles, and register to win a $150.00 rowing experience. Diane and I rode down Saturday morning to check things out, as our kayak and canoe experience tends to make us attracted to people-powered boats and Diane is very interested in doing some rowing. 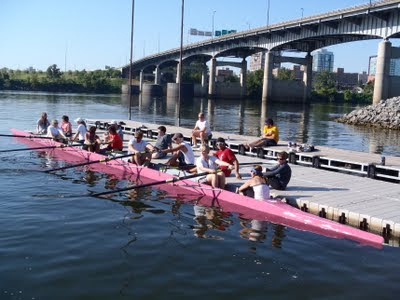 These aspiring oarsmen are doing dock drills in the 8-boat, a racing shell for 8 oarsmen and a cockswain. Protocol requires the cockswain, who barks orders but doesn't have to row, to be short and bossy. 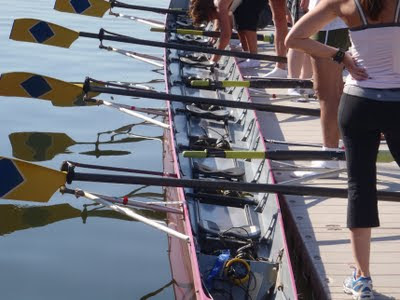 The oar-to-boat ratio says a lot about the potential speed of these craft. 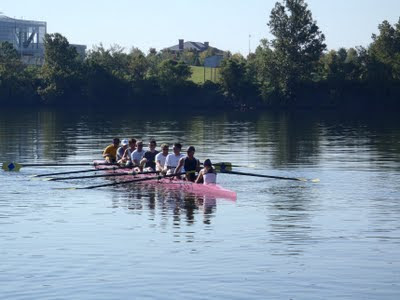 Design aside, the crew determines performance and these beginners are just getting a feel for things as they glide out on the Arkansas River. 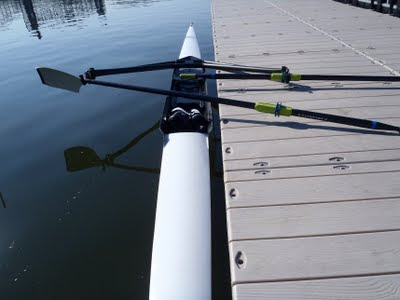 One reason I gave up tandem canoes was the need for a reliable partner, so this single scull has appeal to me.
Thanks to the Arkansas Boathouse Club folks for hosting us!
Ya' just never know what you're gonna see....

I was taking it easy and just cruising around the trail system on Saturday. It was a beautiful day and the trail was active but not crowded. I was riding home along the NLR trail and, as I approached the point where the trail transitions onto River Road, I noticed a couple of photo shoots taking place. I have an interest in such things and always hope to pick up some ideas or information from more experienced photographers, so my attention was first drawn to the two guys on the right side of the road who were getting some  shots of their Dodge Ram pickup. My discerning eye immediately told me that the pickup photogs had been drawn to a shooting angle in which the river provided an interesting backdrop, but that they had totally ignored the position of the sun.  Their results may have been satisfactory for Craig's List or the Thrifty Nickel, but were unlikely to win any awards. After dismissing these guys as amateurs, I swung across the way to where another photographer, also photographing a pickup, was set up in front of the small structure across from the FOP. The building is used by a model train club and is painted in Union Pacific yellow, making for a background that has a little pop. 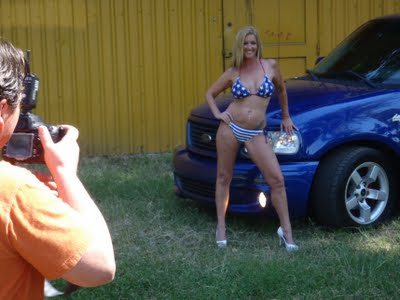 This shooter had good light and the elements of the yellow building, green grass and blue truck nicely divide the scene into thirds, which is very pleasing to the eye. 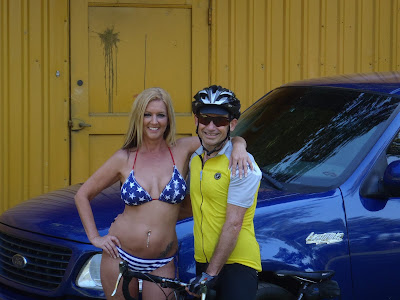 My made-up pseudo media credentials gained me immediate access to the set.
My new friend's name was Cheyenne. I was tempted to put "Cheyenne" in quotation marks, thinking that it was unlikely to be the name that her mother gave her, but I refrained from doing so. Cheyenne and her photographer were very nice folks, so I wish them well and hope they sold the truck.
Budget Hold?
The price exceeded the budget for the new bridge across Shillcutt Bayou to replace the wooden bridge at Burn Park, so I understand that the project is on hold until additional funding is available.
I've heard that initial pricing for the Diamond Bear brew house project also exceeded expectations. The plans that came out for bid were not complete and contractors are often asked to bid from preliminary plans to help create a more realistic budget from which to go forward. I have no direct knowledge of the current plans for the project but would expect it to go on in some form. Diamond Bear will be a great addition to the area and will add the new facet of on-the-trail dining to the River Trail experience. I guess the closest thing to on-the-trail dining currently is Doe's on Markham, but the view from Doe's lacks grandeur.
MS150 Ride the Rock
I admittedly didn't get on board for the MS150 this year as I have in years past, but thanks to a generous friend I was able to participate. I was only available to ride on Sunday but the course was ambitious enough, a 75 mile clockwise loop around Lake Maumelle from River Trail Station in North Little Rock. On Saturday, riders got to climb Wye Mountain about 2.5 times on an 83 mile route, the .5 coming on Ross Hollow Road which offers a descent off of Wye, followed by a sharp climb before continuing the descent. Since I only rode 35-40 easy miles on Saturday, I started Sunday with fresh legs, though I have to report that they didn't stay that way! By the time we headed back into town, I was dreading the climb up the BDB, but my companions dragged my sorry butt in and I rallied to BBQ and a cold Diamond Bear Presidential IPA back at the River Trail Station. 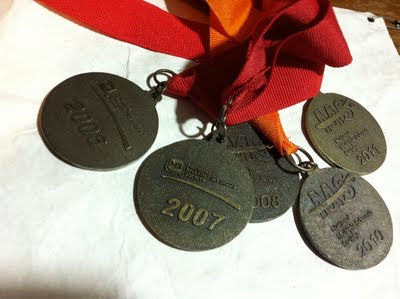 The MS150 is a ride for a great cause and I really enjoyed the years of riding from Mather Lodge at Petit Jean Mountain State Park
There were fewer riders that in years past, perhaps in part due to the new location and almost certainly due to the fact that 50-70,000 people were heading to War Memorial for some Hog football tailgating, but the support was very good with vehicles out on the road and plenty of rest stops. Our little group didn't need much more than water, but it is always nice to know that you will have an opportunity to fill bottles and grab some free food every ten miles or so. There was a lunch stop, but it was only about 9:30 when we went by and we rolled on and grabbed some bananas a little further up the road.
Lisa Brown has done a great job with this ride over the years and I expect it to regain momentum if it remains in Little Rock. Riders are able to choose from many events these days and this one requires a little planning and effort, but it is a fabulous organization for a worthy cause. ﻿
Posted by JBar at 8:10 AM