I finally got around to registering for this weekend's BDB100 this morning. I knew I was going to ride and just kept putting it off until I could pay the maximum fee in the spirit of community support. Diane thinks it's commitment aversion, but, heck I'm married and committed to all sorts of stuff, so that can't be it. 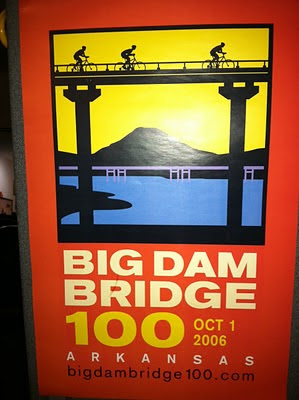 Boy, were we excited about the first BDB100, and it was a fantastic start to one of the best rides around.
In the excitement that led up to the first BDB100 on October 1, 2006, there was a lot of talk about growing the ride into the scale of the Hotter'n Hell Hundred in Wichita Falls, Texas. I haven't been for a few years, but I think there were close to 14,000 riders staged at the start for last HHH in which I participated. It was soon realized that the numbers for the BDB100 have to be somewhat limited if the ride is to utilize the bridge and trail system that inspired it. Central Arkansas is also very different place from Wichita Falls, which, frankly, is out in the middle of nowhere. Once you clear the nearby edge of town, 14,000 riders can actually cover up to 100 miles seemingly without disrupting a whole lot of traffic. 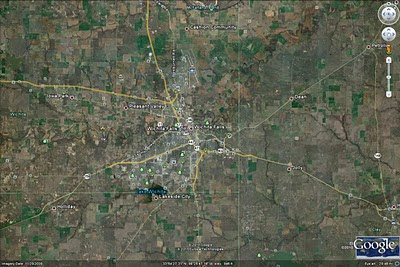 If you look carefully at this Google Earth shot of nowhere, you'll notice that Wichita Falls is right in the middle of it.
Here in God's country, the route has many more choke points in the form of bridges, overpasses, lakes, rivers and other limitations posed by the topography of the area, along with miles of sharing open roads with highway traffic. The accommodations made for rider safety last year left Maumelle Blvd / Highway 100 backed up for hours as riders trickled back into town. This year's course will be a very interesting one and it is made possible by the opening of the Two Rivers Bridge. The folks on Maumelle Blvd will be relieved and the route should have less traffic than the return through Mayflower and Maumelle; however, the new 100 mile tour is actually 105 miles and includes a bit of a stinger with a climb up Wye Mountain on Hwy 113 that comes at about mile 66. The old route included a much-cussed climb on Fortson Road, but that climb is much easier and came a little earlier in the ride. I should also mention that the Metric Century version of this year's ride is 68 miles instead of 62 and includes both Fortson Road and a lovely little climb on Batesville Pike that is late enough in the ride to cause some pain. The new routes will solve many of the traffic problems, but still are not suitable for moving huge throngs of riders such as those at the HHH; however, the BDB100 is growing and the vibe in Argenta for the finish was very nice and gave folks a reason to hose off at the open showers, put on some dry clothes and stick around for awhile. The bars and restaurants did a brisk business and everyone seemed happy with the day.
I don't expect the BDB100 to roll out 15,000 riders any time soon, but I think it can grow as big as it is allowed to. In the first year or two, the ride got page after page of coverage in the Democrat-Gazette and the event was promoted regionally.  The Dem-Gaz doesn't give it much coverage these days, but the newspaper business is hard and some of the novelty is gone, so the abbreviated coverage is understandable. I think organizers are allowing 2200 riders this year and will likely get close to that. With any degree of promotion it will grow, but for now the BDB100 is "right sized".
Now, it's time to eat well, hydrate, and get ready to ride on Saturday!
Posted by JBar at 10:38 PM

Email ThisBlogThis!Share to TwitterShare to FacebookShare to Pinterest
Labels: BDB100

Would it be possible to route the BDB100 east towards Scott?

Like most of the other event and training rides on the calendar? Seriously, I'm glad that the BDB goes north and west for a change of pace from all of the "out east" rides. Just put on your climbing drawers and enjoy the change in scenery! Besides, you never get to coast out on the prairie.