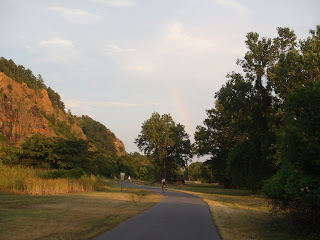 This rainbow was the closest we came to rain on Thursday, but high temperatures were only in the low 90's, a relative cool snap.
Well, for a couple of days last week, the high intensity heat wave momentarily met its match as we got a few sprinkles and temperatures returned to a normal sultry range. The result on Thursday evening was that more riders were out and about. It may have been a coincidence, but as I got on my bike at the sub, I struck up a conversation with the rider parked next to me, who turned out to be a bike and cycling equipment rep from Dallas.  He asked about how to ride the River Trail and was slightly perplexed. I offered to give him the River Trail tour, he accepted, and while I waited on him, another rider rolled up and asked how to follow trail back across the river to downtown Little Rock and up to the BDB. He had a map, but had run out of sensible landmarks at the sub parking lot. I went through the route description and by the riding "on the sidewalk on the wrong side of the road on LaHarpe.."part, he had decided to go back the way he had come. After finishing up my ride with new friend Greg and old friend Mike Collier, yet another new rider approached and asked us if we'd ever ridden the River Trail. He had a map and it looked to him as if he should be able to easily follow the trail and cross to Little Rock for a trip back to the BDB and home in Maumelle. He was a little more determined than the first rider, so I escorted him to the foot of the Broadway Bridge and hoped for the best.
Though it's unusual to come across three lost souls in the same ride, I have run into numerous cyclists in the submarine/Junction Bridge parking lot, maps in hand, totally perplexed.
First, I suggest to our tourism folks that they print a map with clear, realistic directions for negotiating the downtown Little Rock portion of the bike route, such as it is. The Clinton Park Bridge will get folks across the river, but then they have to navigate the River Market/Medical Mile puzzle before they find their way to the patchwork that is the Markham/ Cross/ LaHarpe sidewalk/North St. / sidewalk/ Cantrell underpass to Junior Deputy bike route.
Second, the City of Little Rock needs to get it together and complete the loop with a viable trail through this area. My understanding is that a few hundred thousand dollars has been committed to MetroPlan to conjure up a route behind Dillard's HQ, without even tacit agreement from Dillard's that they'll put aside past resistance to the project. I hope that the project goes forward, but it seems that Dillard's and the Stephens clan (as represented by Cathedral Collegiate School) would both prefer the current homeless camps that occupy land along the river on one side of Cantrell and adjacent to the UP tracks at North St. on the other to the smiling faces of runners and riders passing by. Between Dillard's and Cathedral School, the completion of the route has been effectively stymied for years.
Based on Little Rock's performance to date, all I can say is, good luck with that new plan.

Shillcutt Bayou Bridge: Final design is underway on a replacement for the "wooden bridge" as the structure over Shillcutt Bayou near the Burns park launch ramp is popularly known.

Two Rivers Bridge is scheduled to open this Saturday. Much paving work remains,  but I expect them to get it done! The result will be a steady flow of riders rolling across to check out the newly accessible  west. 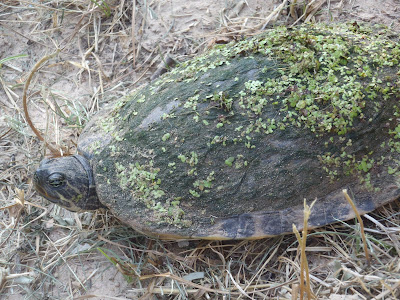 This guy was easing across the River Trail, so I gave him a lift. He was much more benign than the snapper I engaged a couple of weeks ago, and I admired garden on the top of his mobile home. Very environmentally progressive.
Posted by JBar at 3:55 PM

A big map like the one in the River Trail brochure would be a start. If one of those was placed in the Submarine Parking Lot and right as you come off of the Junction Bridge on the LR side that would help. However that by itself wouldn't be enough for someone not familiar with the area. I think a detailed drawing and explanation of the "no mans land" between Cross Street and Junior Deputy is needed. The River Trail Website needs someone to take it over and keep it updated with current trail information like when the NLR side is flooded or some event is going on in the parks that the trail goes through that has a direct impact on accessibility.

Have you seen BACA's recent update (I think it's recent) regarding the trouble spots in the "gap"?