It appears that the Saturday opening of the Two Rivers Bridge will happen. To my knowledge, there is nothing ceremonial planned and the gates will simply be opened. I'm still trying to nail down the time at which the gates will open, but my latest "informed but not official" information said they will open at 7:00AM. My previous "ibno" information said 10:00AM, but the 7:00AM information fits my plans better, so I'm going with it! I think everybody in town is leaning their Saturday ride toward the western expanses linked to Two Rivers Park and I'm no different. 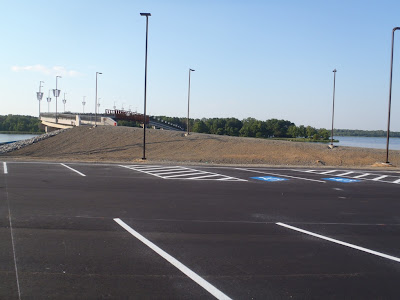 The parking lot is paved and striped. Open the gate and let us through! The folks who have enjoyed the solitude of Two Rivers Park will be having some visitors. Many riders will be just passing through to some currently popular routes like the Lake Loop or Barrett-Garrison.
New Art Along The Trail 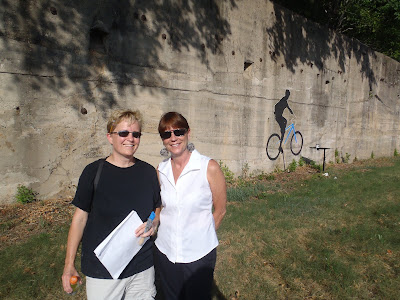 Artist V.L. Cox and North Little Rock Alderman Debi Ross.
﻿
As I headed up the trail from the sub on Tuesday night, I noticed cars parked along the trail and a young couple painting a figure on the old wall in the quarry area west of the F.O.P. building. After I determined they were not taggers, I rolled up to ask them what they were up to and I was directed to a pair of women who were standing near the cars. One of them I recognized as my NLR alderman, Debi Ross, and the other I was soon introduced to as Lynette Cox. She explained a little about her project, but I asked her for more information and I got it! Here is the story on the art that is appearing along our trail:
I have been a professional artist for many years now. My background is in advertising and marketing with a BFA degree in computer graphics. I was working at CJRW, when my paintings started selling in 1997, and I was able to quit my job and have been painting full time ever since. It's been an incredible adventure and wake up every day loving what I do.
It was great meeting you yesterday! After spending time on the bike trail off and on these past few years, I have always noticed what a presence that old loading dock wall had. I had just completed Phase I and Phase II of a big mural project out at the AJATC (Alexander Juvenile Assessment Treatment Center) sponsored by DYS (Dept. of Youth Services), where I painted murals with troubled teenagers.  What we soon realized was that the kids that were physically fighting the day before, stopped fighting when they started painting together as a mural team. It was incredible. Different gang members, different races, different sexes, started handing each other paint brushes and working together as a team. They not only took pride in their work but also became friends. What have I learned out of this? To never, ever, underestimate the power of the arts.

I then decided it was time to line up more public art mural projects out in the community and that wall was just perfect for one. I took my design to Mayor Hays at City Hall and he loved it. This is the first outdoor project, and I wanted to get my feet wet before including other youth. I pulled a few close family friends kids in on this one to see how it went, and they loved it! We also wanted to convey the spirit of the trail. People walking, all different ages of people on bikes, people walking their dogs, runners, etc. I wanted happy, but powerful images, hence the black silhouettes with splashes of color.

Since I now have all the equipment needed, and a little experience under my belt, my goal now is to line up more of these projects and start a program similar to the Philadelphia Mural Project. Their mural program started as an anti-graffiti movement in the 1980's, and exploded into a huge multi-million dollar corporate funded project. Kids stopped tagging things, crime went down, and communities started becoming involved in these murals, which told their history and their story. The people in the community took pride in them and protected them from vandalism. Kids leaned how to work together as a team and also developed their artistic skills in a productive way instead of a destructive way.  Philadelphia now has more murals than any other city in the nation. Their tourism is also off the scale with mural tours.

I am excited about the future, and am glad the bike trail wall was the location of the first mural project. I have met so many people these past few days, and hope to meet more as we work another week on it. We will be projecting the images at night starting this evening around 8:30, and then will be painting six more characters to complete the wall late in the afternoons so as to beat the heat. Everyone is invited to watch, and if you feel so inclined, I will also hand you a paint brush! It's all good!
Sincerely,
L. 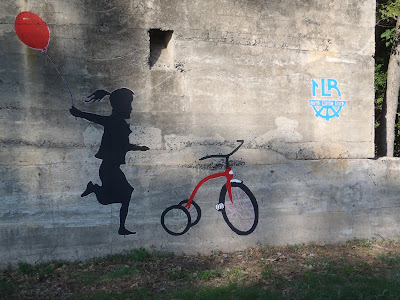 A variety of activities will be represented. I was impressed that the mountain biker image appeared to have mtb gear and the road cyclist was similarly accurately equipped. The tricycle had a seat by the time I finished my ride.
I found that Lynette is aka V.L. Cox, artist, and I suggest that you click on her name to follow the link to see some of her incredible work. If you should see Lynette and her crew at work, stop in and say hello and thank them for the art. And she might put a brush in your hand.
Gratuitous Photo Of Cute Girls 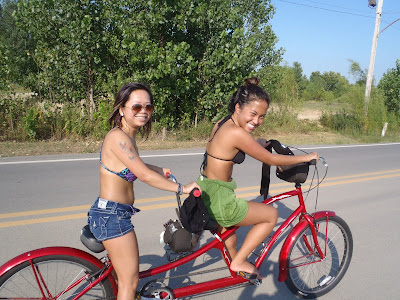 These young ladies are an under-represented set of trail users, barefoot tandem riders, so I decided to represent them here. They happily agreed to have their photo taken, so I decided to forego the sermonette on the protection that might be provided by helmets and shoes. At least the stoker on this rig had some footwear in the form of stylish rhinestone flip-flops.
Posted by JBar at 10:27 PM

I don't even bother trying to figure out what is going on with all the new projects I see pop up on the River Trail. I just wait for you to post about them. You do good work.

Anything to beautify that section of the trail is welcome...

Speaking of projects along the trail, any clue what's going in on River Road?

The big project on River Road in NLR is an apartment complex wth the out-of-place name of Longfellow Arms. Sounds like something that Fred Sanford would come up with. The traffic circle on Pike was built largely to support the additional traffic flow from the project. Apparently there have been a few complaints about the construction activity. Mayor Hays is aware of it and the city has reminded the contractor of their responsibility to keep the roadway clean and safe for riders and runners.