Along The Trail: Construction Bypass and Thoughts on Two Rivers Park 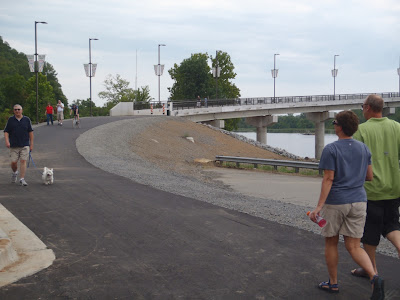 In spite of continuing heat that has cut down on trail use  of late, Two Rivers Bridge and the park are seeing a lot of activity.
You may have noticed the construction of a new section of trail running parallel to the current trail from the Little Rock end of the BDB to Jimerson Creek. This detour was built in preparation for construction of the west ramp off of the BDB and is now open. I'll get a construction schedule as soon as my crack team of researchers comes up with the information. 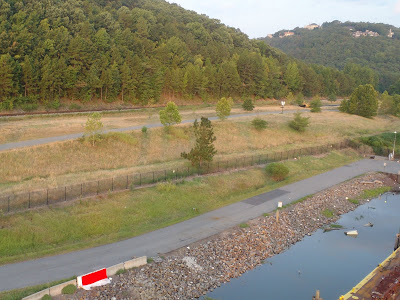 The beginnings of the trail bypass can be seen at the upper right in this photo. It is now complete,and was open and in use as of lunch time Thursday, according to roving reporter, Diane.
Two Rivers Park: More trail miles,but very different feel
Trail users have been flocking to and through Two Rivers Park in the week since the TRB opening. My group passed through on our way to Wye mountain Saturday and I've ridden it a few times since, either solo or in a small group, and I've come to a couple of conclusions/opinions:
While there has been some debate over large, fast groups riding the River Trail, they have a good safety record and, for the most part, try to avoid crowded areas while keeping the speed reeled in except for some stretches of road. The nature and size of the trails at Two Rivers make them inappropriate for any kind of high speed riding. The trails seem a little narrow, sight distances are often limited and the trail surface includes many bumps and dips. Much of the trail distance is also divided by a line that indicates that pedestrians should use one side and cyclists should use the other. I find this to be damn confusing (Ok, so I'm supposed ride on the left going out, but on the right coming back??), but that it is simply the way things are and we need to respect it. If you're riding to hammer, cruise on through the park and hit the road! 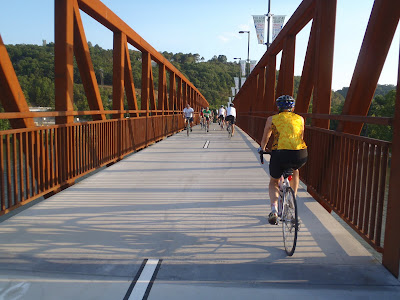 There has been a steady stream of trail users crossing the Two Rivers Bridge since its opening last Saturday, and I have never seen so many folks in the park, itself. I think that many people were just not aware that the resource existed. 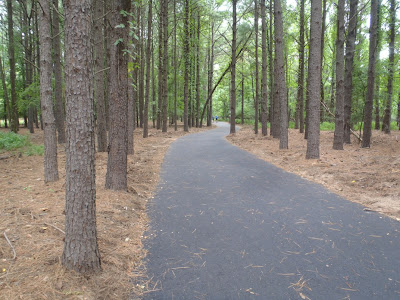 The shady trails of Two Rivers Park invite a relaxed pace and the tooth rattling bumps and wrinkles in the pavement demand it! Slow down and enjoy.
Back on the home front... 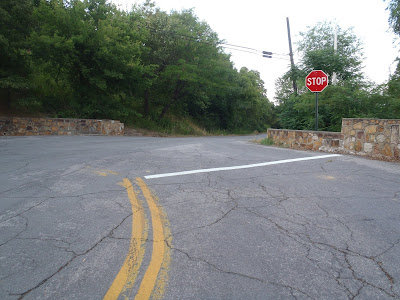 If you haven't ridden up Fort Roots lately, you may not have seen this new stop sign at Short 17th Street. Beware that you no longer have the right-of-way here, though most riders never counted on it, anyway. 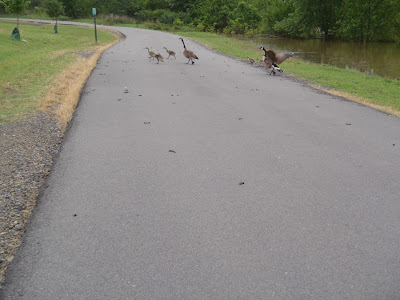 The goose population is out of control. Do you think we could train them to carry little bags and pick up their poop? It seems to be too much to ask of some dog walkers, so I'm not betting on the geese embracing the idea. Perhaps we need to import some coyotes from Hillcrest.
Posted by JBar at 6:05 PM