Wednesday marked the start of the  Dr. Feelgood Burns Park Criterium Series. CARVE has helped put this series together this year and the action for the first races was very good. I missed the C group race, but there were over 30 starters. Large fields contested each race, with the "A" group  finale being a real throw down, as the boys from Competitive Cyclist challenged Kris French and his Snapple crew for top honors. Good sportsmanship and smack talk blended nicely as a two-man break of CC's Brendan Quirk and Wade Wolfenbarger was joined by French, Michael Maddox, and CC's Drew Medlock. That put three Competitive Cyclist riders off the front and the pack settled in, covering attempts to bridge but not making a serious effort to catch the break. There had been plenty of smack talk between the CC team and the Snapple bunch and both were represented in the break, so their teammates and pals were mostly content in the main field. 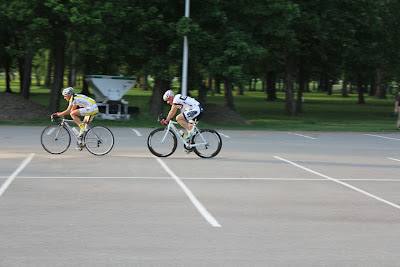 Wade and Brendan make the first break to stick... 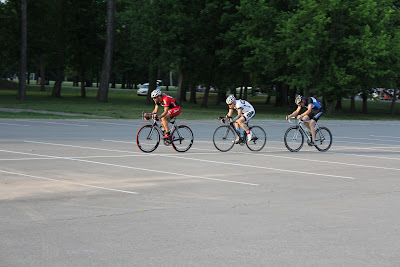 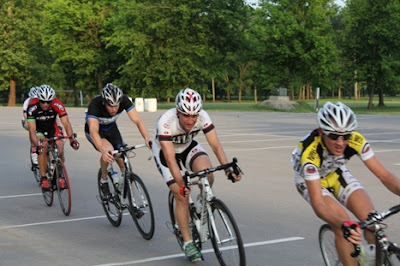 ...and then there were five. 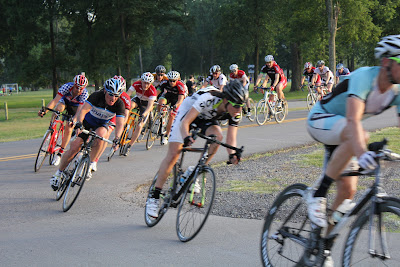 The pack was still in pursuit, but soon settled in as the break was established. 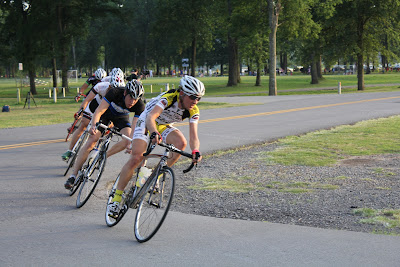 There was little doubt that the eventual winner would come from this five man break. 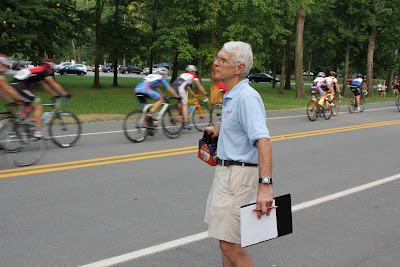 While there are small cash awards for top finishers in the A and B groups, primes such as this 6-pack offer immediate incentives for intermediate sprints. Patrick Small took the pack sprint and his dad took the Fat Tire. 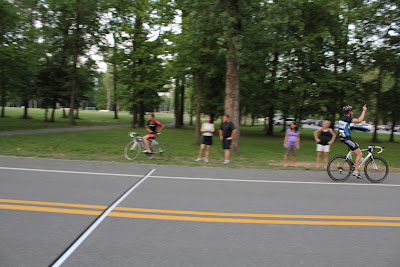 Kris French took the sprint out of the five man break to win the A Race, but the posturing is already underway for next Wednesday's races.
Crits can be a very entertaining form of road bike racing, as spectators can seen the riders over most of the course, and this year's Burns Park series promises to be the best of recent years. As I understand, there will be a grand finale on the 4th of July to finish the series, and it promises to be a barn burner if week 1 is any indication. Thanks to Competitive Cyclist, CARVE, Dr. Feelgood, and everyone else who made this event happen. Go on down next Wednesday and race or watch. I advise spectators to bring the bug spray!
﻿
Posted by JBar at 10:02 PM

I know it's just a typo that you left out that I got fourth place in the C race :)

Chuck Richesons company also made a nice donation that lowered the entry fees for the racers. Thanks Chuck!

Chuck and his company have become very active in the cycling community. Thanks for catching my oversight and recognizing them.

As for your remarkable finish, Charlie, you will be glad to know that I spoke to the guy who finished third and chastised him for costing you the prestigious "C" race podium spot.
My real job duties caused me to work late and miss all of the first race, but all who raced are to be commended.