They buzz among us...

No, I'm not talking about Willie Nelson and his band, though they are lining up at Riverfront Park as I write this. I'm talking about cicadas, as we see the beginnings of the hatch of what should be a massive 13-year brood. I've yet to see them in central Arkansas, but they were emerging in numbers along Richland Creek in Searcy County a couple of weeks ago. 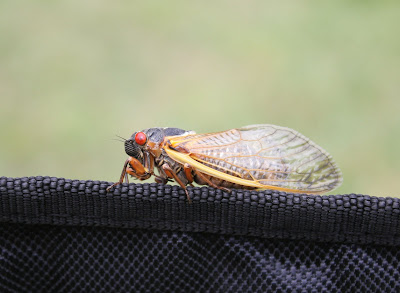 This guy (or gal) had just emerged, leaving an empty shell clinging to the back of the camp chair on which he is perched. According to folks who know such things, we're going to have a noisy summer as millions of these red-eyed critters emerge after spending 13 years underground feeding on roots. Yes, I know it sounds like crazy-talk, but they're bugs, they don't have to have a logical plan, though this appears to be working for them. How many other bugs live 13 or more years?
Posted by JBar at 1:04 PM

There are actually multiple species of cicadas; some with a 13-year cycle and some with an 11-year cycle. Both prime numbers, which means that the species only have to compete above ground once every 143 years! [/nerd]