There was a big crowd at Burns Park for week two of the Wednesday night crit series, both in terms of riders and spectators. In fact, the River Trail seemed pretty empty, in part because the heat kept the casual strollers at home, but also due to the fact that there were probably well over a hundred racers, supporters and hecklers congregated around the crit course. I got there in time to catch some of the "C" race this week, went for a ride and missed all of the "B" race, and got back in time to catch most of yet another hotly contested "A" race. 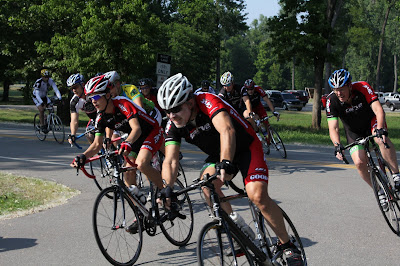 John Elmore, in an early lap. John E won the "C" race, his first race win at the crits, though he won the series last year with consistently good finishes. John is a tough guy who works his ass off on the bike and is always a good wheel to follow. Congratulations, my friend! 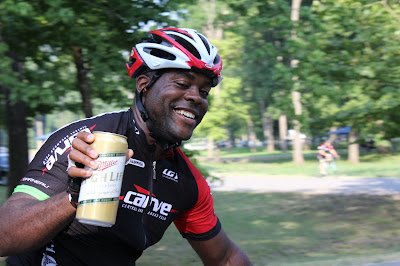 John E won the race, but there are always primes, small prizes awarded for pack sprints. Chris Randle was living the High Life with this spectacular prime provided by Competitive Cyclist. And I thought real cyclists always drank some groovy craft beer or PBR.
I returned from a loop around the River Trail just as the break developed in the "A" race. The race was fast and none of the attempts at bridging out of the pack to this bunch came close. Last week's winner, Kris French, missed the break but he had a teammate up there in the form of veteran Hunter East. Hunter is a near legend, having had a long and successful racing career before laying off competition a few years ago. I'm not sure what has him fired up, perhaps his son Evan's interest in racing, but Hunter has been showing the power and he is among those riders who really understand bike racing strategy. 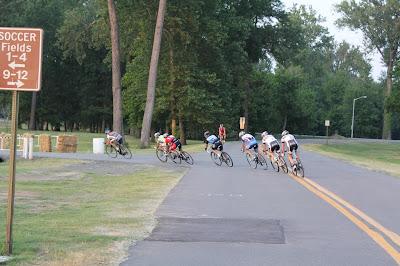 The break is gone... 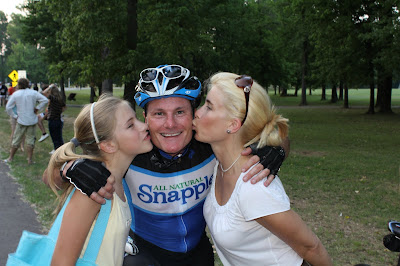 Hunter was the only race winner to bring his own podium girls, perhaps a sign of his confidence in his fitness! That's daughter Hannah with the shadow kiss and wife Dustin planting a little lip on the boy.
Drop on by next Wednesday! I've got other plans, so you folks can fill me in on the action! If you go down to watch and don't understand what's going on, just ask somebody, as there are plenty of experts in the crowd. Or, so I've been told by folks in the crowd.﻿
Posted by JBar at 5:32 PM

Prolly just another typo that the winner of the first sprint/prime in the C race and eventual second place finisher was left out :)

Ok, Charlie, I'll be watching your every move the next time I can catch a race. I hope you don't do anything really embarrassing. I'll be duty bound to report. Of course,if you do really well again, I probably will have wandered off again. What was your prime?

thanks for the kind words