...because I wasn't on the bike, but it wasn't too bad! I'm not yet able to ride, so I'm trying to stay in the loop and not get whiny.

Though fairly short notice, this ride was a big success! I don't know how much money was raised, but 50-60 riders showed up at a minimum of $10.00 per head, so it was at least triple that with the CC and Rapha match. The donations were to be pooled with that from other Rapha rides around the country and given to the Japanese Red Cross. 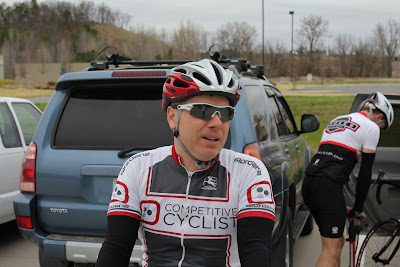 Rick Valentine of Competitive Cyclist. To answer your question, yes, Rick, I'm going to blog you! 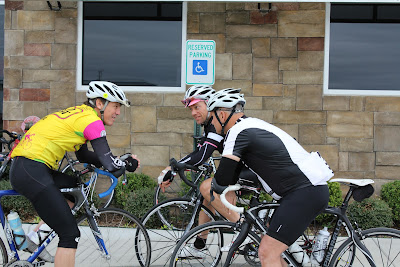 John Kelly, Andy Clark and Scott Warren appearing conspiratorial. I'm sure that they were discussing something of grave importance like, "I'm hungry", "Yeah, me too.", "What time does the food truck get here?" 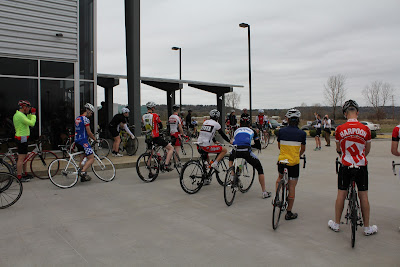 Brendan Quirk readies the bunch for the rollout and explains the routing of the donations. As a matter of pride and prosperity, the Japanese are unaccustomed to accepting outside help.
Something I've wondered about... 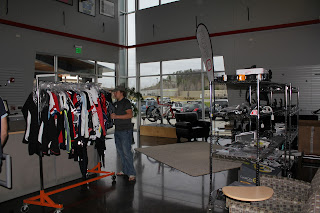 Competitive offers a 60-day "No Questions Asked" warranty, so what do they do with the returned goods? Well, here it is, and there were some bargains to be had if you happened to actually need something that was in the mix, which ranged from bibs to books. Brendan said there is not really a good way to offer it on the website, so he invited riders to take advantage. I'll invite the CC guys to comment with information on how they handle this on a day to day basis.
This CC ride was a big hit and I heard that the CARTI training ride also had a crowd of about 70 riders. Steve Shepherd was along on that ride and reported that it made for quite a meeting when the two groups crossed paths out on the road east of town.﻿
On the home front:
I was once described by a close friend as having a "spring on my butt". I don't sit still very well and just about the time I hit the chair, I'm up again and off on some other mission. Well, I don't have much patience, but I'm having to wait out my injuries, resting just as fast as I can. 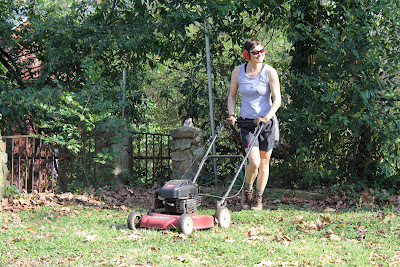 Since I am still unable to perform much physical labor, Diane decided to mow the backyard, an idea that I fully endorsed. Here she is striking a lawn princess pose with her Toro mower. 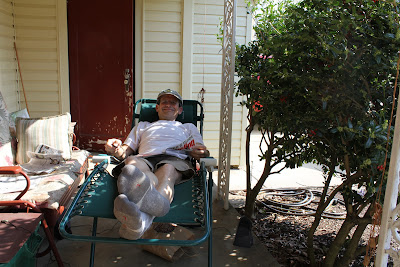 I felt like Thirsty Thurston as I lounged on the front porch with a magazine and some music.
I was actually fairly productive, spending some time getting my bike back into riding shape. I want it to be sure that it is ready to ride when I am!
Posted by JBar at 11:03 PM