Many aspects of bicycle competition render it less than spectator friendly. In spite of the huge popularity with fans of the big road races, let's face it, you stand around all day and then get only a fleeting glimpse of the actual race. At least on the European scene, there are big screen TV's in town squares on the route and every bar has the race on TV, so fans can hang out, get hammered, then rush out as the peloton flies past their location. Crits and cyclocross are better, but if you want to see all of the action up close, you need to head over to MacArthur Park this weekend for some serious bike polo. I reported on Little Rock Bike Polo some time back and it looks like the Little Rock Club has grown up nicely. LRBP will field five teams among the thirty-six competitors at the South Central Bike Polo Championship. Nathan Vandiver passed the attached news release to me. You can find all of the details here: 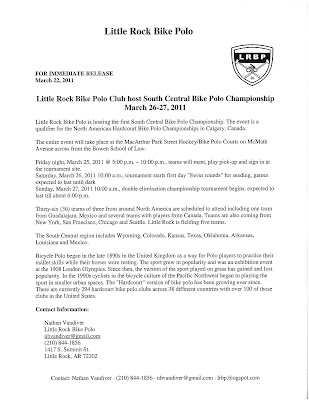 Cruise on by to check out the action as you make your weekend ride or take few cold beverages and go over to stay awhile. Not sure about LR Parks policy, but there may have been a discreet PBR there on one of my earlier visits. You'll find the crowd to be very friendly and more than willing to talk about bike polo when they're not mounted up with mallet in hand. Friday night will see pick-up games. Each time I've dropped by, I was offered a shot at playing and the use of a bike during pick up games. Crashes usually cause more laughter than damage, but I think I'll have to pass until my ribs mend!
Polo is just another facet of the large and growing Central Arkansas bike scene. Exciting stuff!!
Posted by JBar at 7:47 PM