Though the weather didn't cooperate, the South Central Bike Polo Champoinships rolled on at Little Rock's MacArthur Park over the past weekend. Thirty-six teams from all over North America competed in cold and often wet conditions. I was impressed with the level of play of the teams and by the organization of the tournament. Though LRBP's Nathan Vandiver fretted about the affect that the small crowd was having on the food vendors, even as he kept score and timed a game, all of the comments that I heard from participants were very complimentary of the job done by the local club. The games started on time and the brackets were being kept on a laptop and displayed on a large monitor at the registration table. 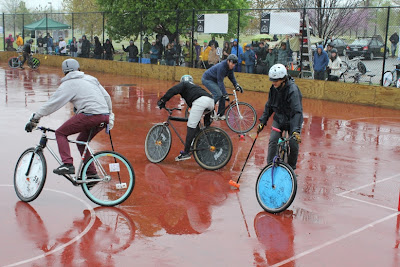 Saturday was wet and unseasonably cold, but the competition was fierce. Things dried out as the day progressed, but remained cold. 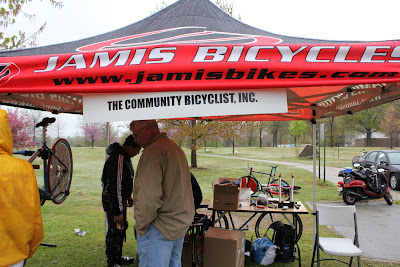 Under the Community Bicyclist shelter, riders could find mechanical support along with tires, tubes and replacement parts. 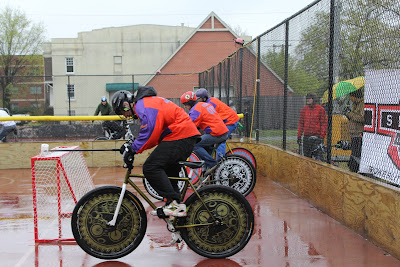 The ball is placed in the middle of the court, the starter counts down from three, then shouts, "polo!", and it is "game on" as the riders charge forward for control of the ball. 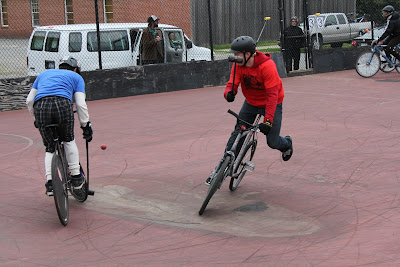 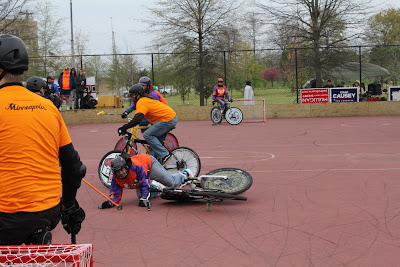 On Sunday, a Minneapolis club was taking on the Lawrence, KS, team Scary Larry in a late round game. Things don't always go as planned. 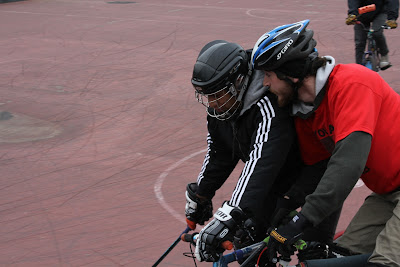 Things can get a little cozy in bike polo. 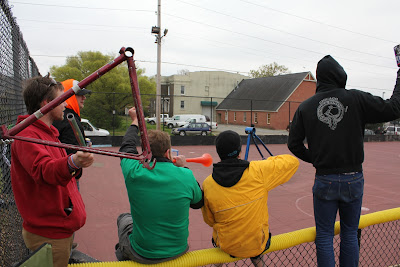 The noise-making was reminiscent of cyclocross, as was the beverage of choice.
It's too bad that the weather was total crap, as the bike polo crowd is very cordial and the atmosphere is competitive in a laid back, fun kind of way. Players warmed up in the parking lot swatting an empty beer can around while the food vendors, a barbecue truck and a hot dog stand, mostly just stood by. There was a pretty good crowd of supporters, but if the weather had been warm, it would have been a party! LRBP did a good job of promoting the event, getting coverage in the Dem-Gaz and on Fox16 that I saw and, of course, they were shamelessly pimped here.
Good to see that yet another facet of cycling is prospering here. We can be a bike town!
Posted by JBar at 9:21 PM