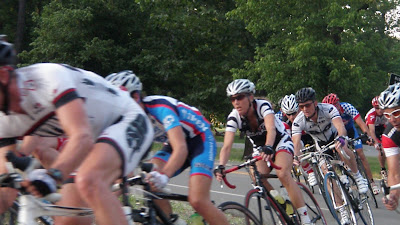 Liz Cazer and JD McCay in the heart of the "A" Race pack during the Competitive Cyclist Burns Park Tuesday Night Crit
The Ronde van Burns Crit Series got off to a great start last night, and we dropped by before and after an abbreviated Tuesday night Fast Girl ride. The early evening "C" race was won by our own JohnEEE! Elmore. I missed the "B" group, but made it back to catch most of the "A" race which was won by the talented Noah Singer, who bolted from a three-man break and managed to lap the pack for the win. After the remnants of the break took second and third, Kris French took the field sprint out of the pack. 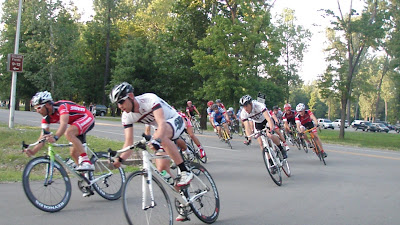 The action was fast and the talent was showing. Competitive Cyclist put their "B" Team in SRAM Red kit against the store-sponsored Team Panther. There was a little trash talk,  but Panther's Noah took the win.
The crits have traditionally been held on Wednesdays, but Tuesday is the night this year! Come on out and watch the action. Feel free to yell support for the riders, 'cause they're not paying attention to you, anyway!
It's unfortunate that there is not more road racing in Arkansas these days, so the crits may be your best bet for watching some road bike competition in the area.
Here's a link to Noah's blog on the subject of the race:
http://www.teampanther.com/2010/06/ronde-van-burns-training-series-week-one/?nggpage=2&pageid=366
Posted by JBar at 4:47 PM