Tuesday Night At The Crits

Once again, the Tuesday Fast Girl ride was a smaller than average group and over an abbreviated route so that we could go up and check out the Ronde van Burns Crits, hosted by Competitive Cyclist. Once again, Team Panther took top honors, but the 'A' race was very different from last week. Last week, the pack stayed mostly intact for the entire race. This week, the field was shattered and down to only 15 of 30 starters with 29 minutes left on the 55 minute race clock. Tough crowd. I think Team Panther came in with a plan, as the attacks were frequent and had the desired effect of softening up the bunch. Noah Singer put on the pressure late with a solo attack which set up a pair of his teammates for a winning two man escape containing Kris French and Zach Spinhirne-Martin. Kris took the win and Noah rolled in third at the front of the small remaining pack. 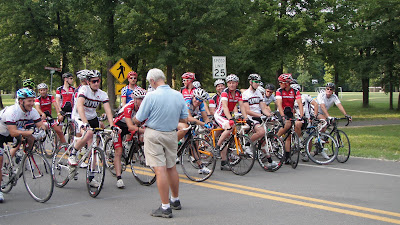 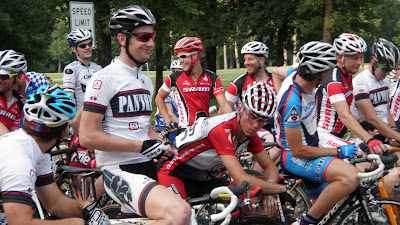 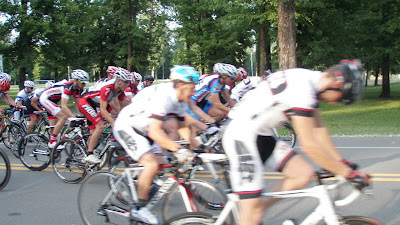 And, they're off. The hard pace and the heat would soon take it's toll on half the starters.
I've had a couple of folks ask me if it is OK just to come down and watch the crits. The answer, of course, is "Hell, yeah!!" The races take place in the soccer complex area. You'll want to approach from direction of the river, as the entry from the north (covered bridge area) is blocked for the race. This is good, hard racing and the boys would enjoy a bigger audience.
Posted by JBar at 4:45 PM

panther had a plan, go really fast the whole time so everybody will know there max heartrate, it was fun