Catching Up: Gone to Colorado

Well, we're home after a long week of riding, boating, visiting, snoozing, cruising, eating, drinking and festival-going along the Arkansas River in Colorado.
Any way you cut it, it's a long damn drive to Colorado, about 1000 miles to our specific destination near Salida.
http://cityofsalida.com/about/

I mentioned in my most recent post the cool little motel that we found in Raton, N.M.. Here are a few photos of the Melody Lane Budget Host Raton: 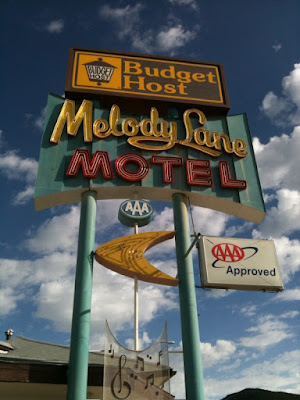 The freeway passed the Melody Lane Motel by, but it is in good hands and provided a very pleasant break in a long drive. 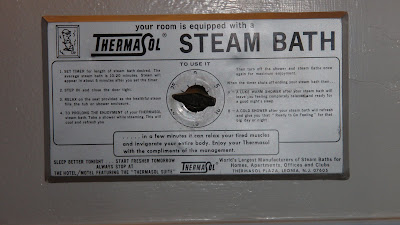 The bathroom had a steam shower that appeared to be from an age gone by, but it worked great and I want one! It had none of today's wimpy safety limits and was hot enough to cook veggies, I believe. 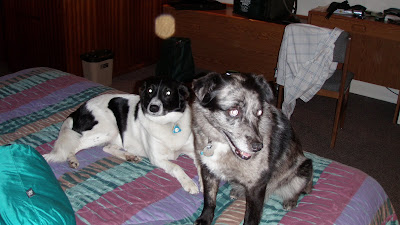 Willie and  Zuli took the "Pets Welcome" policy to heart 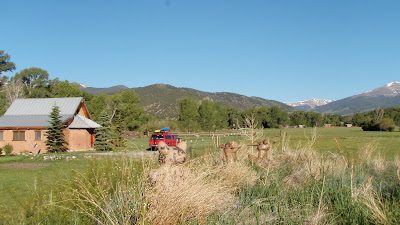 We got to our rental cabin early Saturday afternoon and were delighted with our choice. We were renting the guest house of folks named Chip and Peggy Barton, so how could we go wrong? The South Fork of the Arkansas runs as a clear cold stream behind the tree line in the image above. 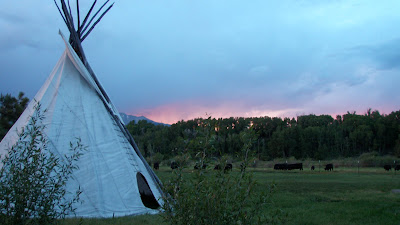 The teepee added to the view from the hot tub. 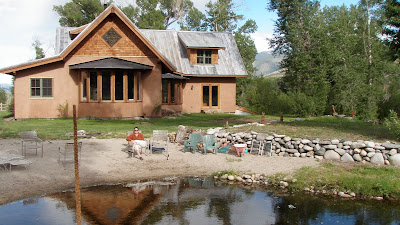 Diane especially enjoyed the pond and small beach. She took a swim one warm afternoon, but I passed. There's a fine line between refreshing and just damned cold. The Barton's house was nice enough from the outside, but I was blown away by the interior. Peggy was the designer and Chip is a master builder. They had incorporated carved panels and columns from Bali, tropical hardwoods salvaged in Honduras from Hurricane Felix, native stone and more. I could have spent a day just being shown the various elements of construction and design. Chip is currently considering an offer to build an ecotourism lodge in the north of India. 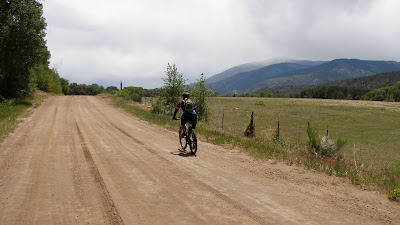 We could ride mountain bikes from the house on a combination of dirt and paved roads. There's an access to the highly touted Rainbow Trail a couple of miles away, but we didn't make it very far in that direction. 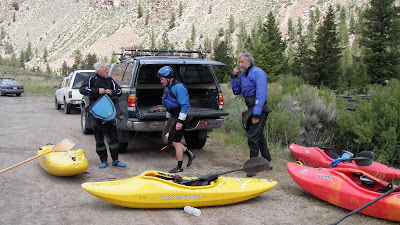 On Monday, Kent Davidson and I hooked up with friends Mike and Ben to run the Numbers section of the Arkansas 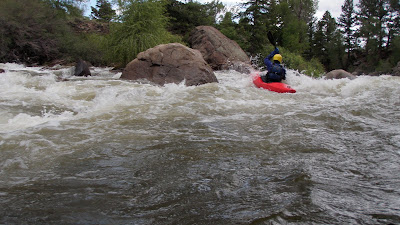 The water was cold, big and pretty pushy. This is one of my favorite stretches of whitewater anywhere. It's fast, continuous and just plain fun!
I'll be trying to catch up for awhile, but the week was full of good stuff!  Tomorrow, it's back to work, but I'll be rolling out new stuff as soon as I can put it together and write it up.
Posted by JBar at 10:16 PM