Here's a description from the FIBArk site: This year marks the 62nd anniversary of FIBArk, the nation's oldest whitewater festival and Salida's signature event. Since 1949, every June during the Spring snow runoff, Salida has hosted FIBArk, "First in Boating on the Arkansas." Located in Salida's historic downtown, Riverside Park is the center of FIBArk activity and entertainment. Food, arts and crafts, and industry vendors are available, as well as a beer tent, a carnival, and a state-of-the art amphitheater for this year's extraordinary musical line-up. ..and a link to the schedule of events: http://fibark.net/fibark_events.php Among the frantic no-trail hill climb race up and down Tenderfoot Mountain, 5k and 10 K races, a parade in which Diane, Willie, and Zuli marched proudly with a whole pack of comical canines, carnival food, New Belgium beers, whitewater rodeos, mountain bike races, downriver kayak races, and a BoaterX event on the Class V Pine Creek section of the Arkansas River ( a place where someone seems to get killed almost every year, as was the case for a rafter last Sunday), several nights of very good live music, etc, etc, THE BIG EVENT is the Hooligan Race. The rules are that you are to make a watercraft from anything that was never intended to be a boat and run it down through some big wave holes that make up the Salida Whitewater Park. This year's entries ranged from the best-of-show "bike guy" to the Mobile Dispensary, built in the shape of a smoking bong in a tip of the lid to Colorado's medical marijuana laws, to a simple block of foam. A covered wagon pulled by unicorns competed with a Roman chariot being towed by a pair of leaping dolphins, and they all then had to slip under the arches of the "F" Street Bridge downstream. Needless to say, it is hilarious carnage by design, hosted on the loudspeaker by the wise-cracking 2010 New Belgium FIBArk Commodore: Mr. P.T. Wood. The best surviving entrants returned for finals. The bike guy got "Best Of Show" and was also the only raft to could be ridden back to the owner's truck! 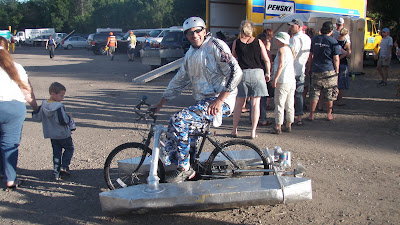 Bike Guy's machine had a second chain from his cassette which then attached to a gearbox which in turn drove a propeller shaft. He could move around with surprising power in the water and rolled just fine on the road, too. 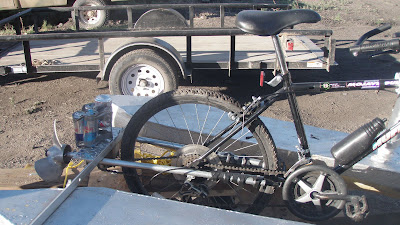 Here's a shot of the drive train. 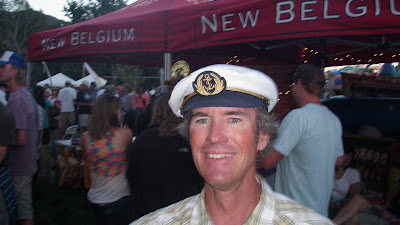 Commodore P.T. Wood was a great supporter of New Belgium Beer, FIBArk's key sponsor. He challenged participants in the next day's mountain bike races to stick around until closing time, drinking at a local hot spot. Riders who made the 2:00AM closing time AND won their race the next morning received the Commodore Cup, whatever the hell that was!
The next morning featured the mountain bike race over 3 laps over courses of various difficulty depending on your category. I rode up to a gnarly section of the expert course before the race started and was a bit embarrassed at having to walk up a portion of the way on an old county road that was also part of the course. I was somewhat redeemed to see many of the experts walking the same stretch as I rode back to town. Granted, some of them were on single speeds! 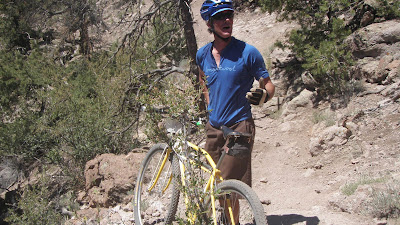 I'll give it to the Commodore. He was out on the expert mountain bike race course come Sunday morning....and on a rigid steel-frame 29er from a local builder. I think he made two laps and DNF'd, but his official duties were many. 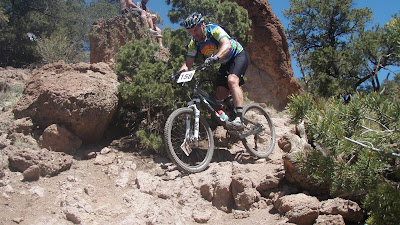 The guys who rode this made it look easy for the most part. 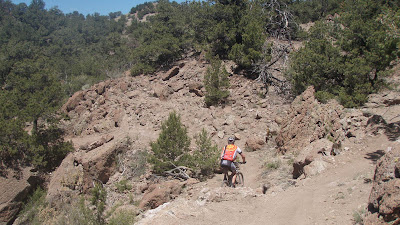 It was steep, stepped and ragged rock. Not a good place to go down. 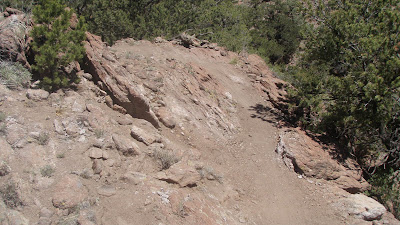 This switchback may have been an even worse place to go down, as it's a tad exposed! The trail surface is mostly very loose sand and loose rocks on a hard rock base. Makes for touchy traction.
Hope you enjoyed a peek at FIBArk. There's a whole lot more to it, but that's it for tonight!  If you plan to go to Colorado in the summer months, the festival is the third weekend in June. The Salida area offers good riding, good boating, great weather and a vibrant small-town culture tied closely to the outdoor recreation the area offers. Monarch ski area is close by, so the locals play outside all year long.
Posted by JBar at 11:06 PM