Recently, I received an e-mail from a friendly reader expressing his concerns about riders on Rebsamen Park Road slowing cars on that stretch by riding in the traffic lanes. The reader, being a mannerly and thoughtful individual, felt that riding in the traffic lanes with the bike lane close at hand would only serve to incite drivers to possible crankiness. While I agree with the reader that cyclists shouldn't hold up traffic by riding abreast, etc., simply to assert their right to the road when they could as easily string out and let traffic by, or to my reader's point, when there is a servicable bike lane close at hand. Therein lies the rub on the route in question. The bike lane is poorly maintained and it is often/usually littered with gravel, glass, and tree limbs and is therefore deemed unsafe by most riders wanting to train at speed or ride a paceline. Drivers are seldom delayed for more than a few seconds and, frankly, this stretch of road should be driven with the expectation that it will be busy with cyclists and other recreational traffic. 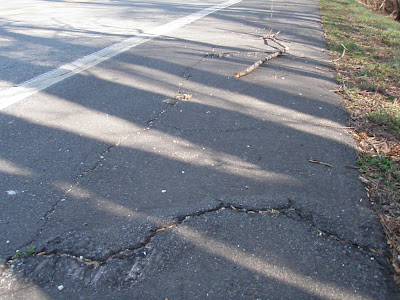 Riders need to accomodate the flow of traffic, but we shouldn't be expected to ride on this. Rider safety trumps pressure to stick to the bike lane. 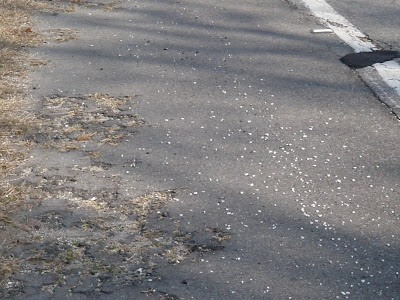 Like many cities, Little Rock has budget problems, but I think the inability to run a street sweeper a few miles once a month is more of an indication of the low priority given cycling infrastructure by the city.
Posted by JBar at 8:56 AM

"I think the inability to run a street sweeper a few miles once a month is more of an indication of the low priority given cycling infrastructure by the city."

Truer words have never been spoken. This is the biggest difference between the NLR and LR trail systems. Given the fitness level of the Mayors in each respective city, it comes as no surprise which trail system gets the most attention.

Perfect timing for this write-up. I was thinking the same thing as I ended up riding the bike lane tonight. It was a very bumpy ride and made controlling my bike a bit difficult.