Ok, I won't complain about our weather...

...because it's a hell of a lot better than what Oklahoma City has in store for the weekend:

Saturday: Snow. Widespread blowing snow. High near 34. Windy, with a north northwest wind between 23 and 28 mph, with gusts as high as 39 mph. Chance of precipitation is 80%. New snow accumulation of 1 to 3 inches possible.

Saturday Night: Widespread blowing snow and a chance of snow. Mostly cloudy, with a low around 27. Windy, with a north northwest wind between 17 and 26 mph, with gusts as high as 37 mph. Chance of precipitation is 40%.

Sunday: Snow likely, mainly before 1pm. Cloudy, with a high near 37. North northwest wind between 17 and 21 mph, with gusts as high as 30 mph. Chance of precipitation is 70%.

Smoke On The Water
I don't think that it will be real handy to be on the bike in NLR's Riverfront Park this weekend. Here are a couple of shots of the scene of the Smoke On The Water BBQ Competition: 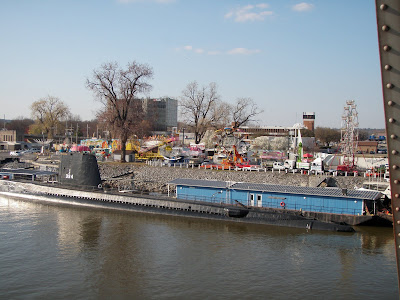 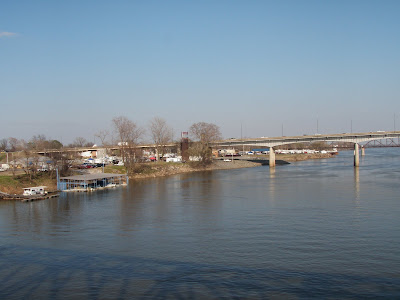 It looked more like a county fair than my idea of a BBQ Cook-Off, but these are not a couple of bubbas sittin' around a Weber grill. They're serious! I guess I could be acused of thinking small. There was already plenty of Miller Lite going down by Thursday evening, and that was just for setting up, so things should be in full roar by Friday night. And, with all of that fine BBQ, I have to wonder who is going to eat corn dogs and turkey legs, but I'm sure they'll get some takers.
Posted by JBar at 2:01 PM