Last week, I was asked if I would be interested in volunteering to be a bike escort for wheelchair/ hand-cyclists in the Little Rock Marathon. I've ridden the course a couple of times over the years during the race, as an outlaw I found out when I got around to reading the rules,but it was fun and this would allow me to do the same thing legally and give a hand in this very grand, well-run event.
We met near the start line at 7:00 on Sunday morning and got our marching orders. Four riders would stick with the hand-cycle guys and the rest of us would start out with the lead runners and then drop back as clusters formed and be something of a vanguard. 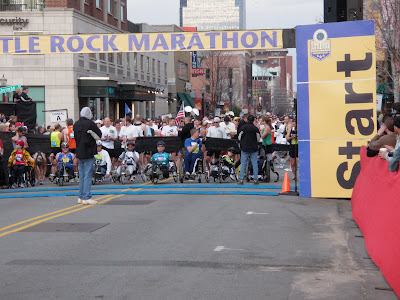 This is how it looks outside the start line. I was clipped in and ready to get moving when they turned loose the hordes.
At about mile 4, the eventual winner of the race, Moninda Marube, got separation from the small group of elite runners and never looked back. I stuck with him, heroically leading the way through the crowds. Well, not quite leading, since the escort at the head of the race consisted of four cops on rumbling Harley-Davidsons, followed by a police car, followed by a Cushman meter-reader scooter with a timer mounted on it, all of which had flashing blue lights on and were giving an occasional toot of the siren. Then came me in my official skirt-length Marathon "Bike Team" T-shirt and then came the most impressive among us, the skinny guy tapping out the 5 minute miles. 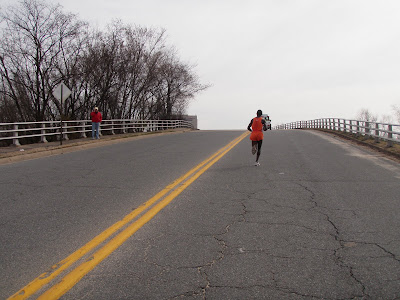 It was lonely off the front! 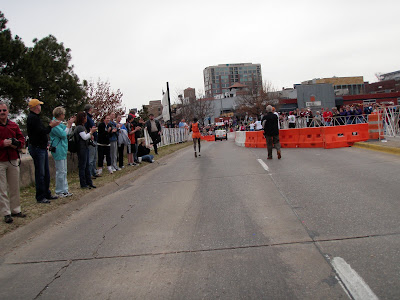 After taking the lead at about mile 4, Marube was never threatened, and won by about 4 minutes.
The Bike Team was kind of a test to see what value we could add to the race. There were a couple of times when it helped to be at street level on a bike in that I was able to speak to people, which the police escorts could not as readily do from their vehicles. I think the single runner kind of caught people by surprise and it was easy for me to alert the inattentive folks who might have stepped into his path. As we pulled onto Cantrell, I took the lane and held it behind the runner until a patrol car slipped into the gap. The Little Rock Police and the volunteers did an excellent job of securing the route, so mostly I got to just ride along and pay attention. Having volunteers on bikes seems like a good idea to me, due to the intimacy with the runners and the crowd and the fact that with due care cyclists can move safely and unobtrusively among the runners.
Posted by JBar at 9:19 PM