While on a ski trip to Park City, UT, last week, I saw that I had missed  a phone call from my friend and ride partner Dumas Garrett. Conversation with Dumas is always interesting, so I gave him a call back.
"Hey, Dumas, what's up?"
"I got hit."
That's never a good thing to hear, but for cyclists, it almost always means some degree of injury. Dumas quickly let me know that he was OK, other than some road rash and a few bruises, and then he related his story.
He was taking advantage of the fine weather Sunday before last, riding west on Pinnacle Valley Road near the intersection with Beck Road, when he sensed a vehicle approaching him from behind. As most of your are aware, this area is very popular with road cyclists; however, road cyclists are not so popular with many area residents and other drivers who frequently use the road.
The approaching vehicle turned out to be a pickup, and Dumas's first reaction was, "Shit, this guy is way too close". I may be paraphrasing there, but that would have been the vocabulary that best expressed my own thoughts, so bear with me. It was about then that Dumas realized that the truck was pulling a boat an trailer and that he was going to get hit. The traffic lanes are narrow and there is no shoulder on Pinnacle Valley, so there was no escape route even if Dumas had had the time to react. I would guess from the subsequent attitude of the driver that he used the road frequently and that he was consciously passing close by so as to scare or intimidate. Most of us have experienced that type of behavior and worse from resentful drivers on Pinnacle Valley Road. 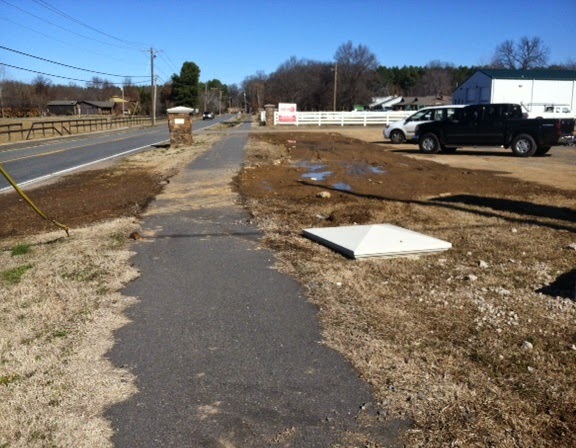 Pinnacle Valley Road near Beck Road. Two narrow lanes and no shoulder. The strip in the foreground is what some locals like to call a "bike path".
Dumas said he clearly remembered the view of gravel as his face approached the ditch. The driver stopped and his first reaction was to berate Dumas for riding his bike on the road when there is a parallel "bike path". Huh?
First and foremost, cyclists have an unmitigated right to ride on the public roadways of Arkansas. Second, what the driver referred to is not a bike path by any recognized standard. 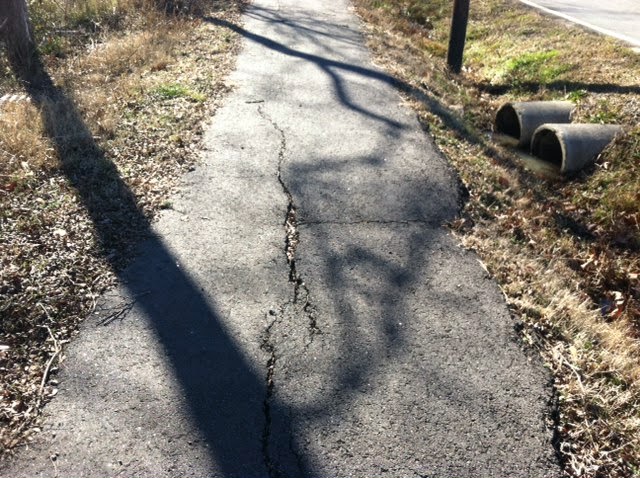 When then-Pulaski County Judge Buddy Villines announced a plan for bike paths along Pinnacle Valley, riders were thrilled. When we saw the product, not so much. 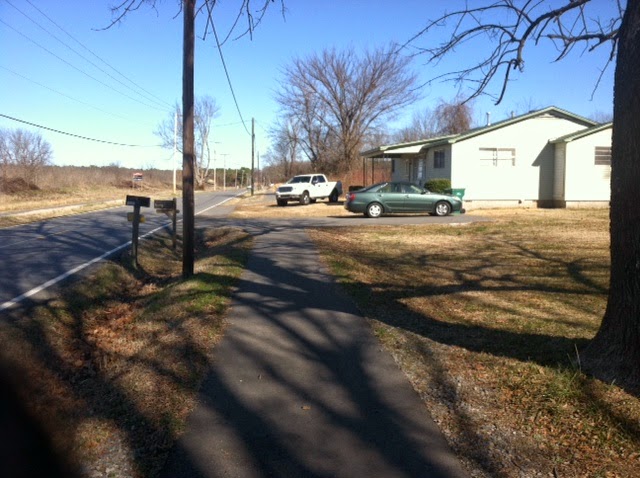 This narrow, poorly constructed and unmaintained strip of asphalt is marginally serviceable as a sidewalk.

Dumas was assessing his injuries and the damage to his bike as this scene unfolded. A family who had been travelling behind the truck stopped to make sure that he was OK and to offer assistance as needed. Dumas was hurt and shaken. His front wheel was trashed, along with his fork, helmet, and glasses.

After determining that Dumas was OK, my next question was to ask whether he had called the police. He had not. While I understand that he was in the midst of a scene and mostly just wanted to get home and lick his wounds, I was disappointed to hear that for several reasons:

- The driver was definitively in violation of Arkansas' "Safe Passing" law.

While a $100.00 fine isn't much of a penalty, it is a violation and I would assume that it would be reported to the driver's insurance company. Hey, kill a rider and it goes to a whopping $1000.00.

- The cyclist deserves compensation for damages. I don't have the build list of the damaged bike, but I would guess that replacing a wheel, fork, helmet, and glasses will cost $1500.00, give or take. Those are the big items that were named, but it is likely that bar tape will have to be replaced and most mechanics recommend replacing bars after as hard crash. I haven't ever been able to put a firm price on road rash and peace of mind, but it would be expensive.

- The cycling community needs to stand firm in sending the message that it is not OK to buzz, threaten, hit, or otherwise abuse riders. If the driver had run another motor vehicle off the road and caused significant damage, there is no doubt that the police would have been called, the offending driver would have been cited, and damages would have been paid. We are not second-class citizens. We are taxpayers and voters. Among my cycling friends, there are doctors, educators, mechanics, business owners, bankers, housewives, lawyers, nurses, accountants, home builders, firemen and police officers. WE are sons, daughters, grandfathers, uncles, aunts, and your neighbors. In other words, we are regular folks. While the mere act of riding a bike may strip away our value in the eyes of the small minded, we won't be pushed off the road. We belong there.

Stories of incidents like this will always bring out the haters who want to relate tales of rude cyclists hogging the road and running stop signs, etc etc, etc. True, there are some bad riders, but I would invite those folks to start making the same kind of mental note whenever they see a driver talking on the phone, texting, rolling a stop sign, speeding, passing improperly, tailgating, making a lane change or turning without signaling. And then I would ask them which group poses the greatest danger to others, a cyclist on an 18 pound bike or a bad driver in a 3000 pound SUV.

Ride safely and be careful out there. There are a lot of bad drivers, but don't let them scare you off of the road. We belong.
Let's go ride.

Well said John. Thanks for all that you do!