Hit By A Car-Reporting Gets Personal

I awoke early Saturday and decided that I'd ride down to join the CARVE Saturday morning ride out east. The group was pretty small, about a dozen riders, and was quite civilized, with a steady pace and good conversation. After returning to the submarine parking lot, I rode up the River Trail a short distance in order to bump my mileage over the 50-mile mark, and then headed toward home through Argenta and up Main Street. As I often do, I turned on my front and rear blinkies for the ride through town. I was feeling good about my morning on the bike and was looking forward to my "second breakfast." That's the big breakfast that is best enjoyed after the ride. I was content and in a little groove as I rode the last mile home.

And then I got hit by a car.

I was riding up the hill on Main Street and had just crossed over I-40 when I was struck from the rear. It's funny how quickly you can evaluate things. The sound as my DuraAce rear wheel was struck was much like the ping of a big-headed driver hitting a golf ball or a solid hit in college baseball. I went from about 10-MPH to 23-MPH and regained control of the bike as I shot across the adjacent traffic lane. I knew immediately that I had been hit by a car and wondered what blow would fall next.
I was wearing a bright blue jacket and I had a bright-as-hell Thunderbolt flasher on my seatpost. It was a little after 10:00AM. I never heard the car.
After once again failing my JBar E.R.P. (Expletive Reduction Program) pledge, I got off the road. The driver stopped and I called 911. My first question was, "How could you not have seen me? Were you on the phone?" He had two young children in the car and was looking for the westbound ramp to I-40. I went back this afternoon and drove the stretch, which I have driven tens of thousands of times over my lifetime, just to see it from the his perspective. The road curves slightly to the right, but there is no reason for him not to have seen me. I don't think he was going very fast and there is clear sight distance for hundreds of feet. 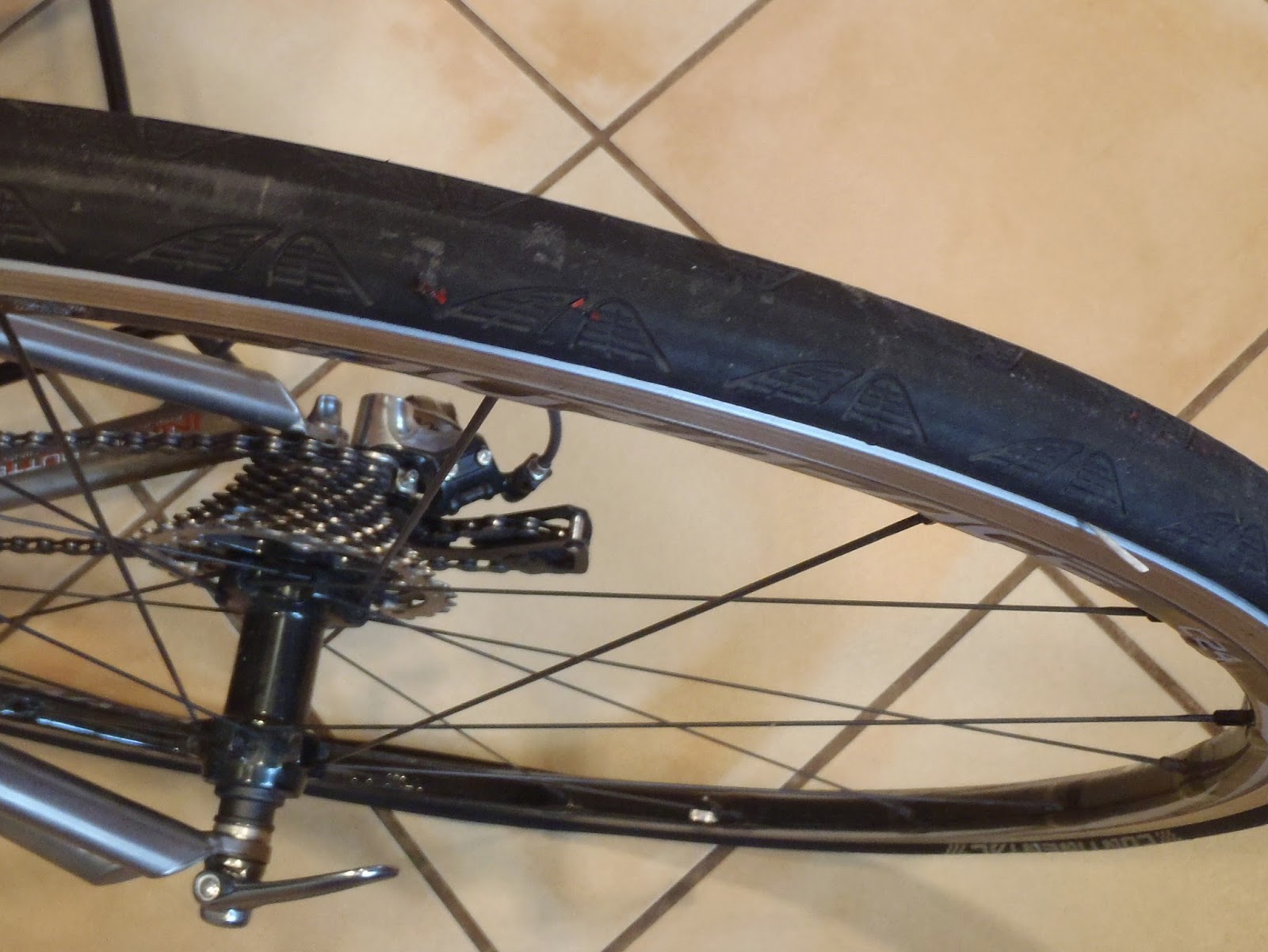 Red bits of bumper embedded in the GP4000

As we waited for the police to arrive and then again as the officer completed his report, we had a civil visit. The driver was a very nice young man who was truly sorry, and thankful that he had seen me in time to brake right before he hit me. He pointed to the tail light as what finally got his attention. My rear tire was a bit shredded and has a little embedded bits of red bumper in it. I haven't given my bike a thorough going over yet, but it appears to be OK. The driver was cited for unsafe driving and the very nice NLR police officer offered me a ride home, which I gladly accepted.


Some Conclusions-Call Me Mr. Lucky
I was doing everything right. I was riding in my proper lane. I had on brightly colored clothing. Though it was broad daylight, I had a very bright flashing red tail light and a small white front flasher on my bars to increase my visibility.
The driver seemed to be a very nice, responsible young father who lost focus for a moment while behind the wheel. We're both fortunate that the consequences were not life-changing. As it is, he'll have some points on his license and I'll bill him for what damage was done. I got very emotional while telling Diane why there was a note with a police report number on the kitchen counter. I could have been out of the blog business and the driver could have been facing much more serious charges and consequences. I'll gratefully accept the luck.

Riding bikes on the road is dangerous. Some infrastructure improvements like bike lanes and paths could certainly make things safer for all of us, but we take our chances out on the road. And the driver that hits you may not be some resentful a-hole trying to make a point out on Pinnacle Valley Road, but is just as likely to be a nice person who takes his eyes off the road for a moment. The result is the same.

Retrospective on my masterful bike handling
As I went about fixing that big breakfast and draining the adrenaline fueled emotion of a near-tragedy, I noticed that my left knee hurt. Checking it out, I found I had a coin-size oozing injury at the center of my knee cap. I couldn't image what I could have hit until I threw a leg over the bike to do a little modeling. My conclusion is that my bar end struck my knee as I was thrown forward and to the left. The impact likely checked the turning of the front wheel and saved my ass. Yes, it was amazing that I thought to use my knee in that manner. (insert wink here).
Posted by JBar at 6:52 PM

Thanks, Jo. Just glad to be here.

Scary stuff John. Really glad it was not worse.

Your play by play is as close as I want to get to this experience....thanks for sharing. Our biking community needs the Bartons to stick around! How's the knee?

John! Ack!! I am so glad it wasn't worse.
The moment-of-inattention scenario haunts me. Any one of us could become that driver, on the wrong day, in the wrong place. It's much too easy for me to empathize with him.
I would say the answer is infrastructure — because it is — but the worst wreck I've had was on the bike trail, so ... So I am glad you are OK.

Glad it wasn't more serious JBar, but I'm sure it was scary. I almost got hit a couple of months ago while riding and wondered how the person didn't see me either (I had two bright lights, one blinking, wearing reflective clothing, taking the lane, etc). The moment of inattentiveness concerns me too. I know it can happen to anyone, and as a cyclist/runner, hitting another pedestrian or cyclist is one of my worst fears.

glad it wasn't worse John, shakes you don't it