Oh, how the weeks do fly by.....
Last Friday was Bike To Work Day, and the local turnout was good in spite of the fact that we had March-like temperatures. Diane led a convoy from Park Hill, along with  former NLR Mayor and congressional candidate Pat Hays, and we were joined by several other area riders. 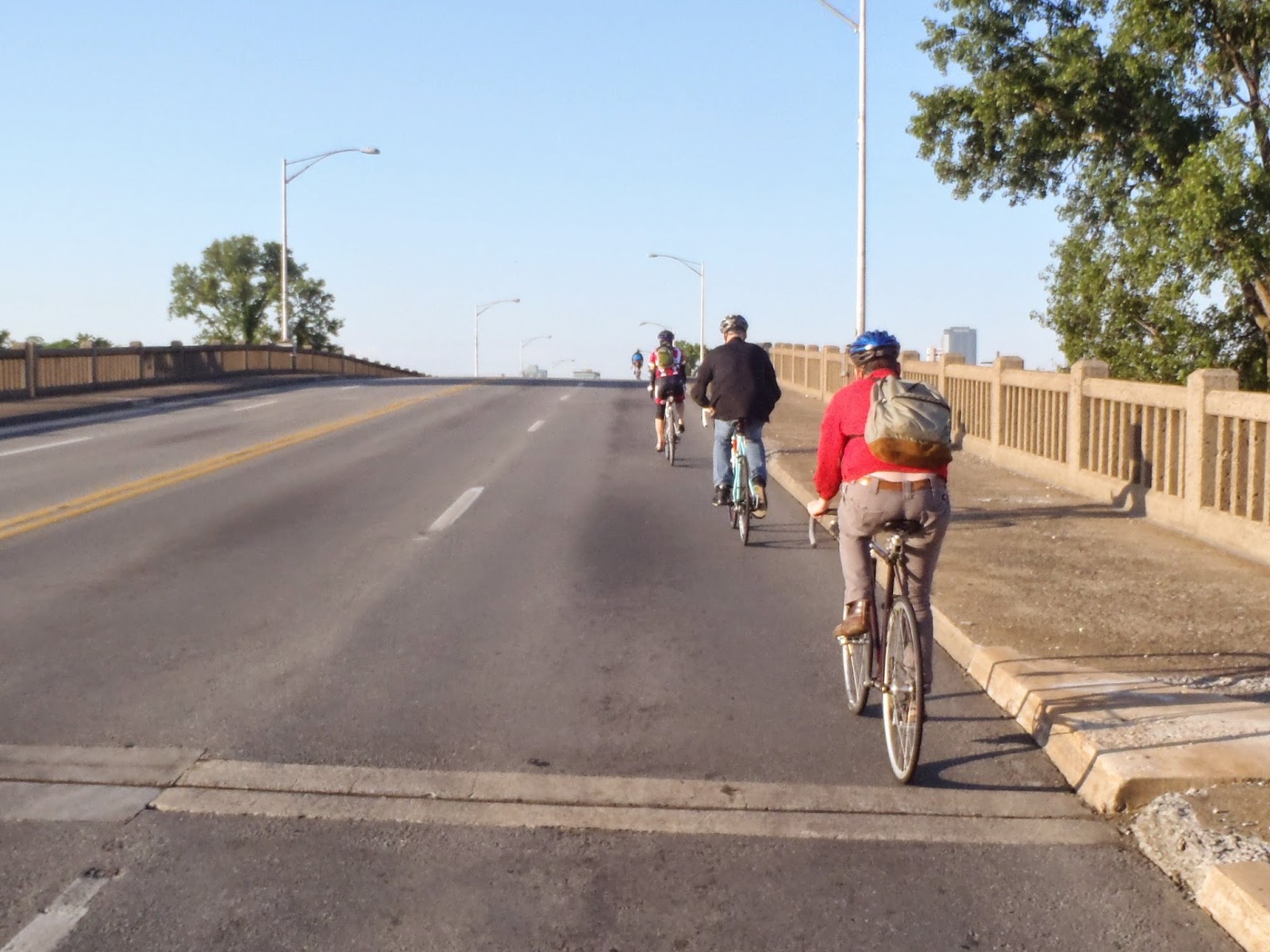 Pat Hays led the way as we crossed the Main Street viaduct to downtown. 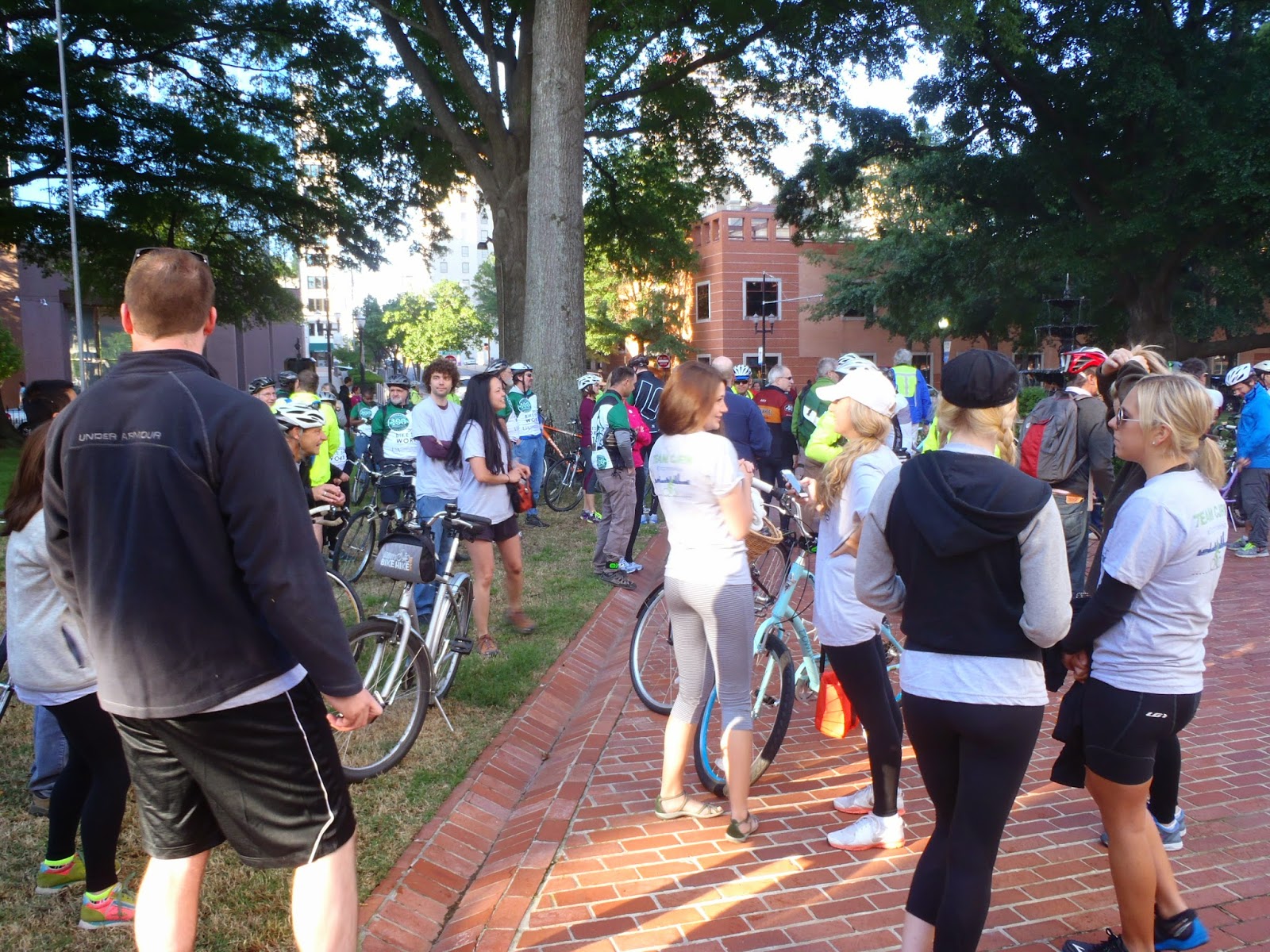 Riders from all over the city gathered at the Old State House. 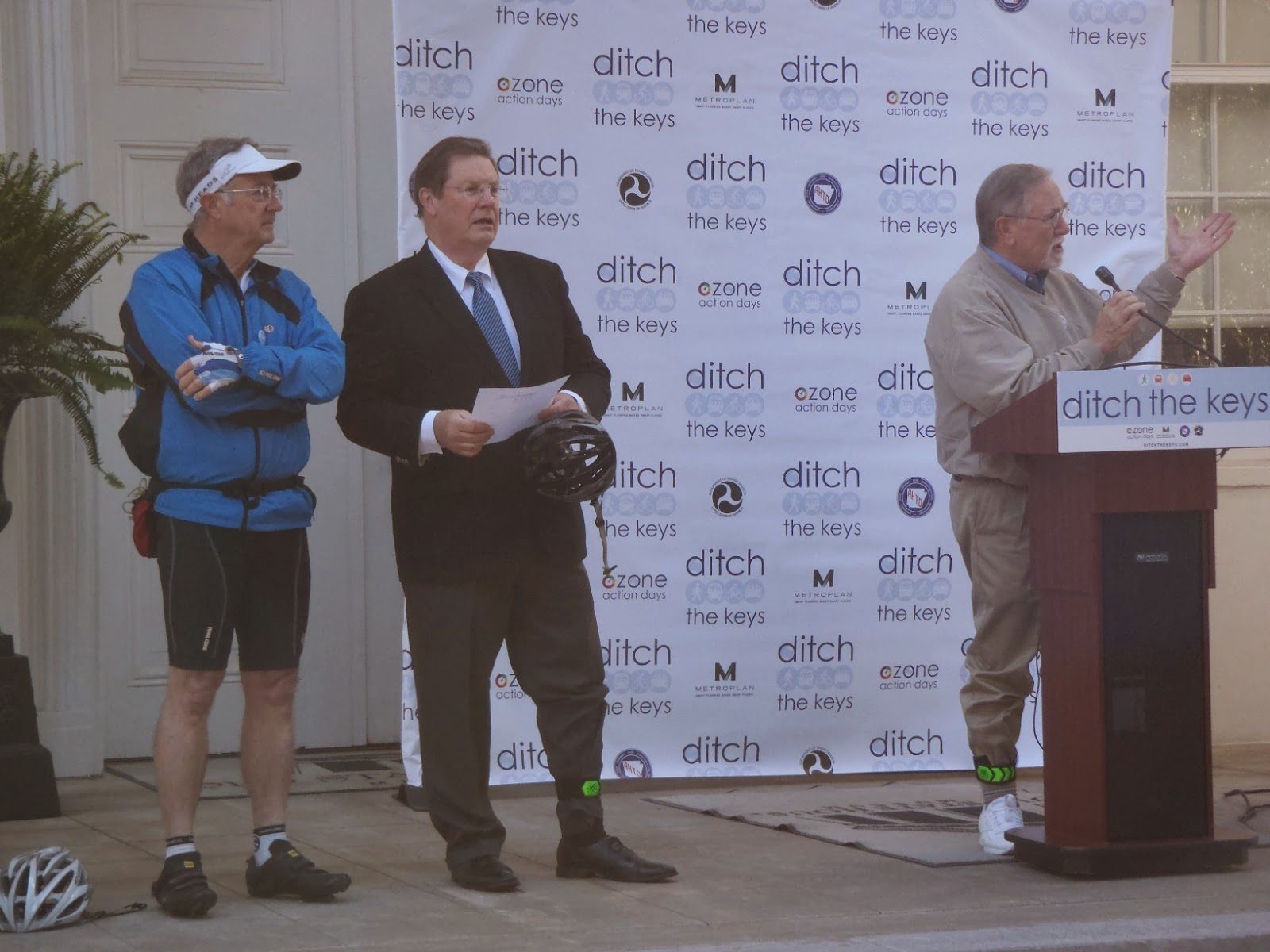 Pay Hays, Mayor Stodola, and Jim McKenzie
Bike To Work is always a bit festive. Friday was not exception, as cyclists heard a few words from LR Mayor Mark Stodola, Metroplan's Jim McKenzie, and Pat Hays regarding the importance of cycling in our community and the progress that we have made in recent years. As Hays recounted our ride to the event, "we rode down Main Street just like we belonged there...because we do!"
Warning- Political aside:Keep that in mind at election time. Pat  Hays is unlikely to promise bike lanes on every highway, but he is a dedicated cyclist who understands the economic and quality-of-life benefits associated with alternative transportation. I've found him to be a conservative and pragmatic politician in a world over-promising extremists.
As has been the case in recent years, the Capital Hotel welcomed all riders to breakfast. This was not a cold bagel and bad coffee, but a very nice buffet, table service, and very good coffee! 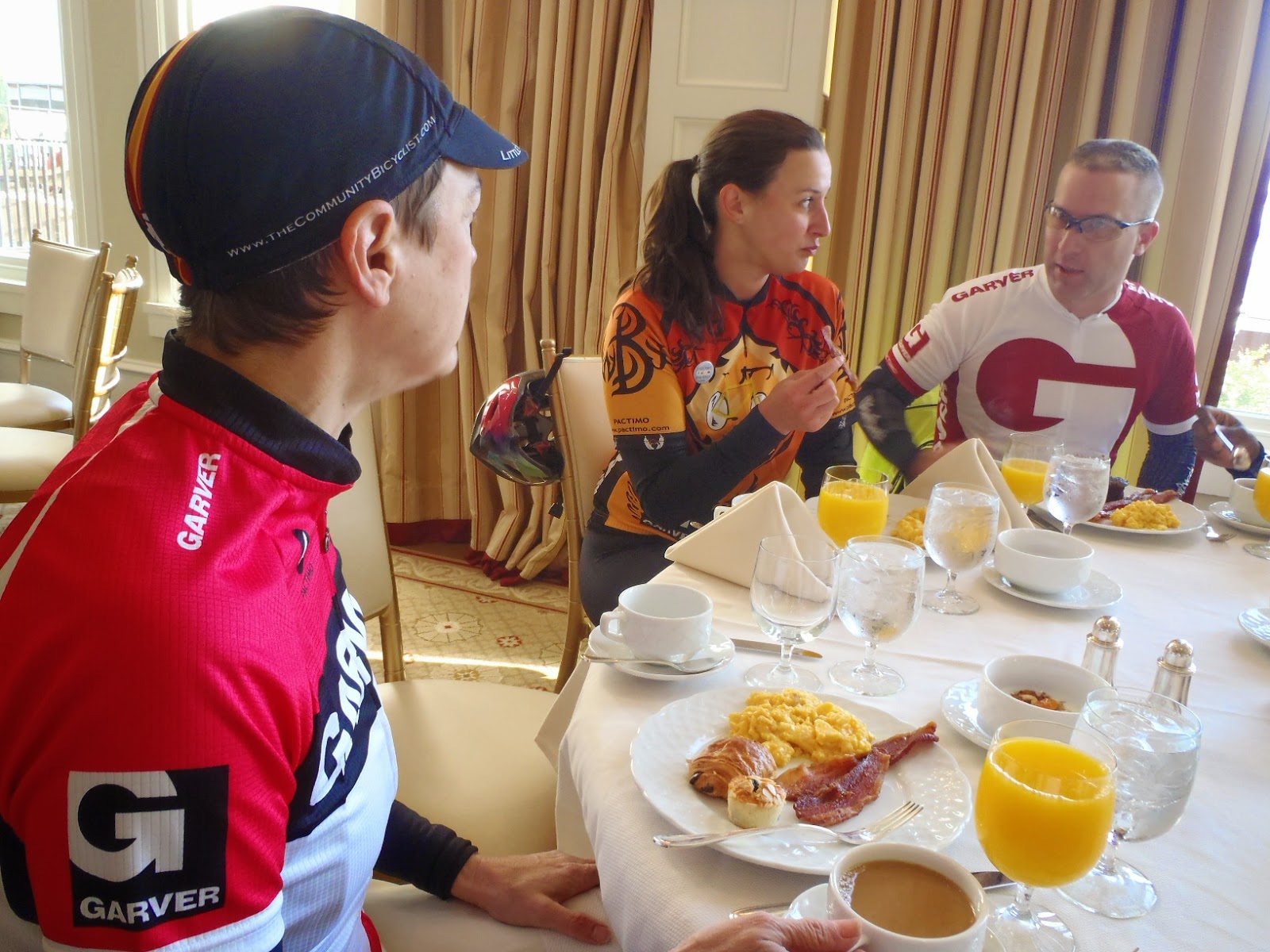 Mmmmm...bacon! Diane and some of the Garver Crew enjoyed an elegant breakfast before heading on to the office.
Capital COO Michael Chaffin said the room had been set for 80 people and it was full to overflowing. Thanks to MC and the Capital for the continued support of cycling in our city! 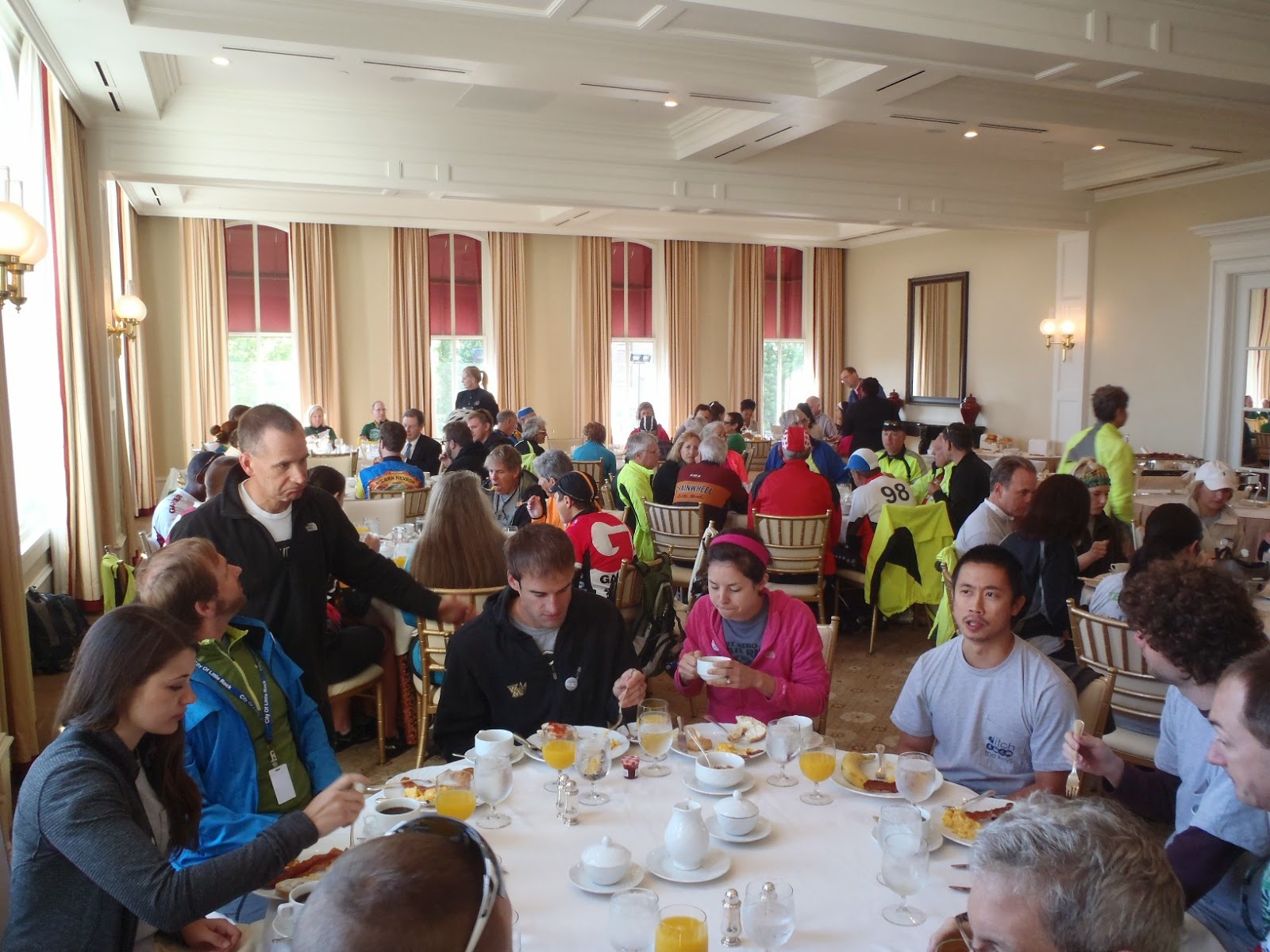 Chaffin checking in with the diners. No complaints, here, Michael! 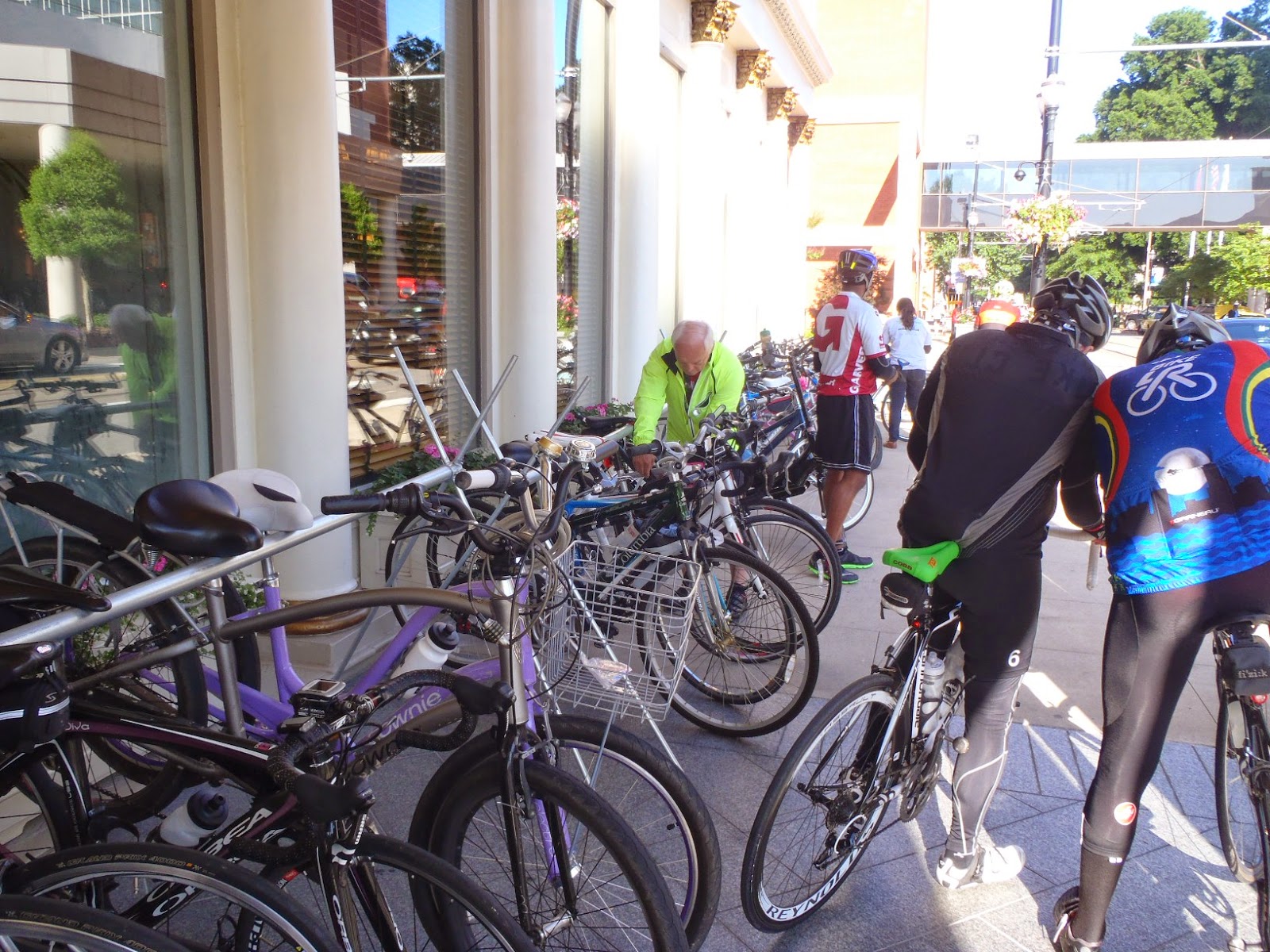 Parking downtown is easy when you pick the proper mode of transportation. The Capital regularly offers valet bike parking but added racks out front for this event.
It is very rewarding to see so many civic and business leaders embracing the concept of bikes as transportation, and to recognize that cycling has brought a great deal of positive economic impact to Central Arkansas. We are becoming a place to which educated young people are drawn. For my generation, the location of a job was what most often caused people to relocate. For many people today, careers are almost secondary to lifestyle amenities, and the draw of our area is growing every day.
Posted by JBar at 2:36 PM