Along the Trail and Around Our Bike Town

Bike related events continue to occur in rapid-fire order around here, making it difficult for me to keep up. After all, I want to participate in or observe everything, my own riding requires that I spend time on the bike, I have a pretty demanding full-time job, writing this blog is rewarding and I take a little pride in the writing and in keeping it interesting, I love spending time with Diane and our little dog pack, we have two homes and a piece of rural property to keep in order, I require sleep, and recent rains meant that a creek was calling me to load a boat and head to the hills.
Let me be clear, there is not a complaint anywhere on that list! Life around here is full of good things and populated with a lot of good people enjoying them! Here are a few reports on recent happenings. 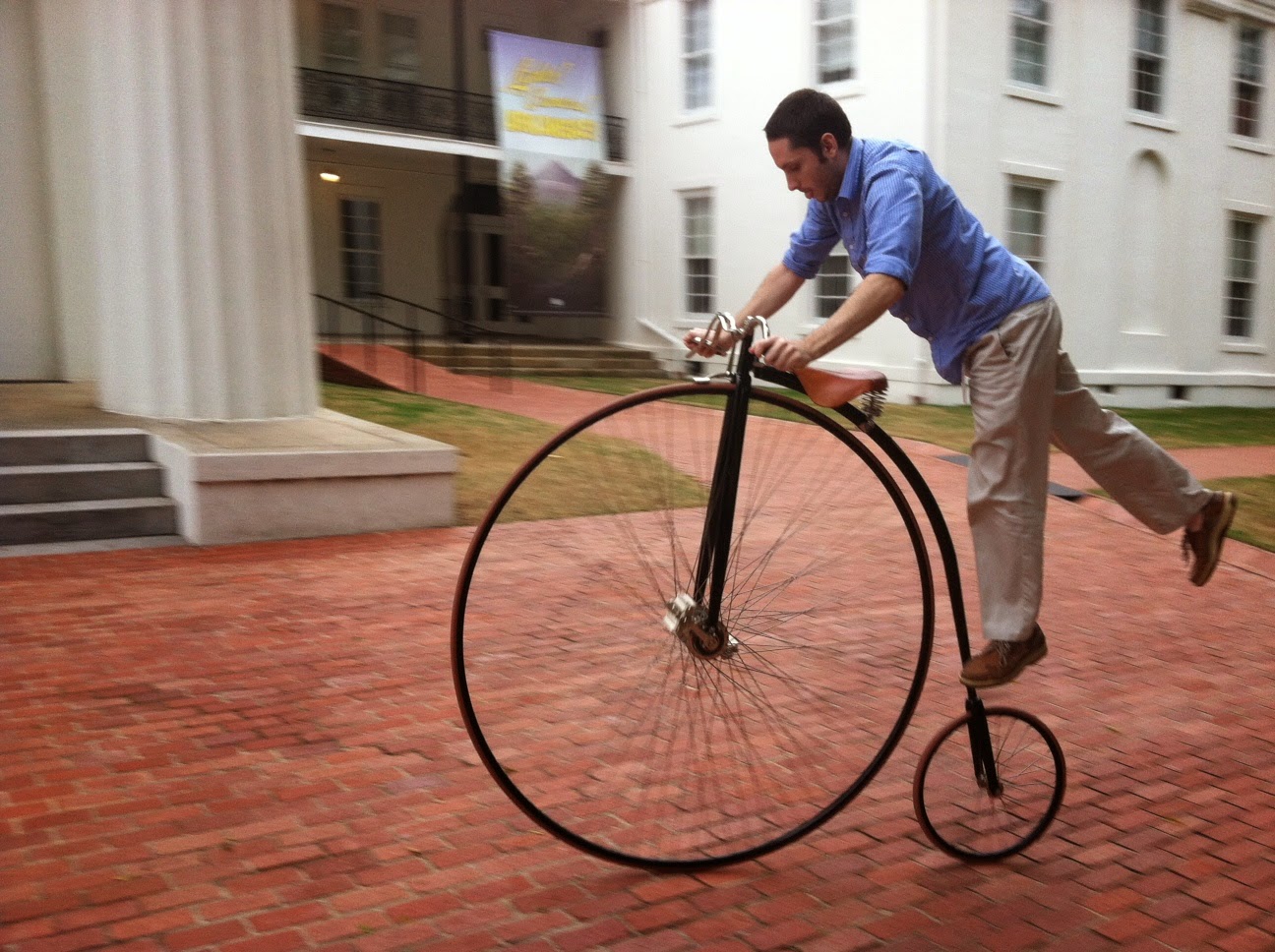 Visitors to the Old State House were greeted by this rider, seen demonstrating the mount of the high wheeler. 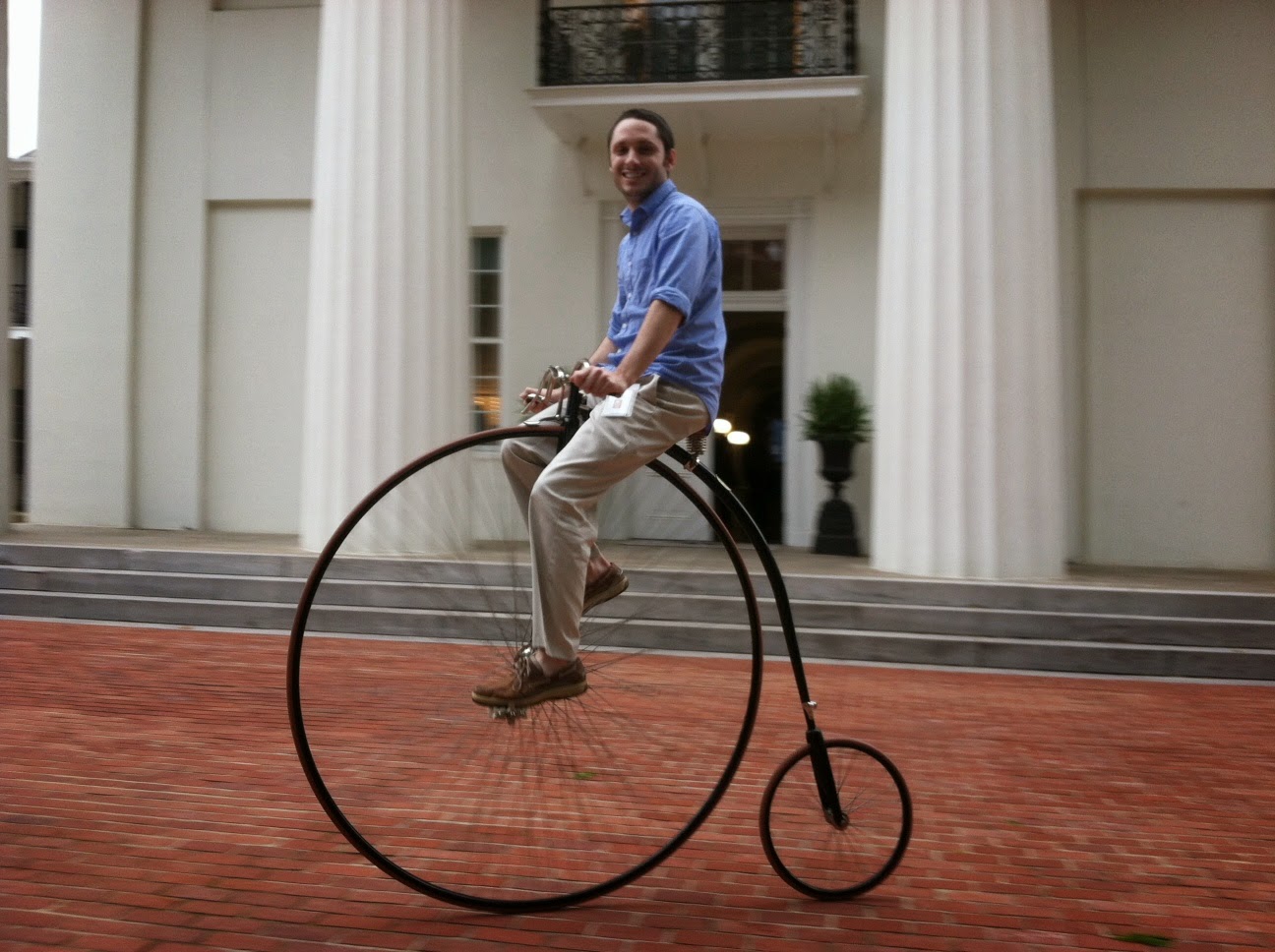 The penny-farthing in motion looks quite elegant

I hope that you got by over the weekend to see this, as it was well worth a visit. One of the best parts was the video that streamed in the exhibit hall. It featured many familiar figures from our community talking about the evolution and growth of cycling in recent years, and the emotion was palpable. I've been involved in cycling for a short 10 years and the growth and vitality of cycling here has amazed me. I can imagine how gratifying it is for some of the folks who for decades have been advocating, hoping, working, and wishing for the kind of cycling resources and activities that we now enjoy and take for granted. 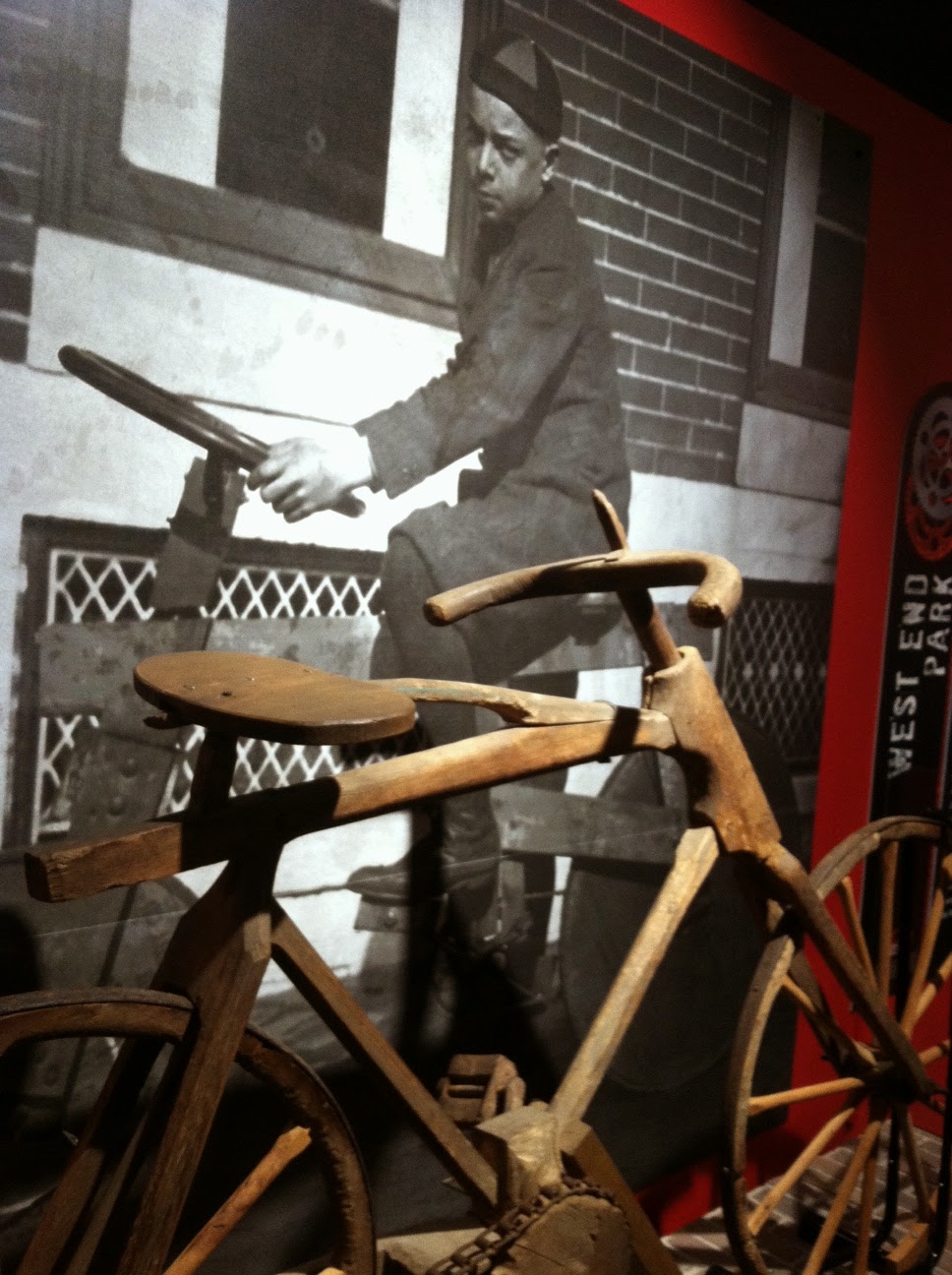 I would speculate that this bike was neither stiff nor compliant. The exhibit included everything from a home made wooden bike to the latest carbon BMX machines, most on loan from local collectors and shops. 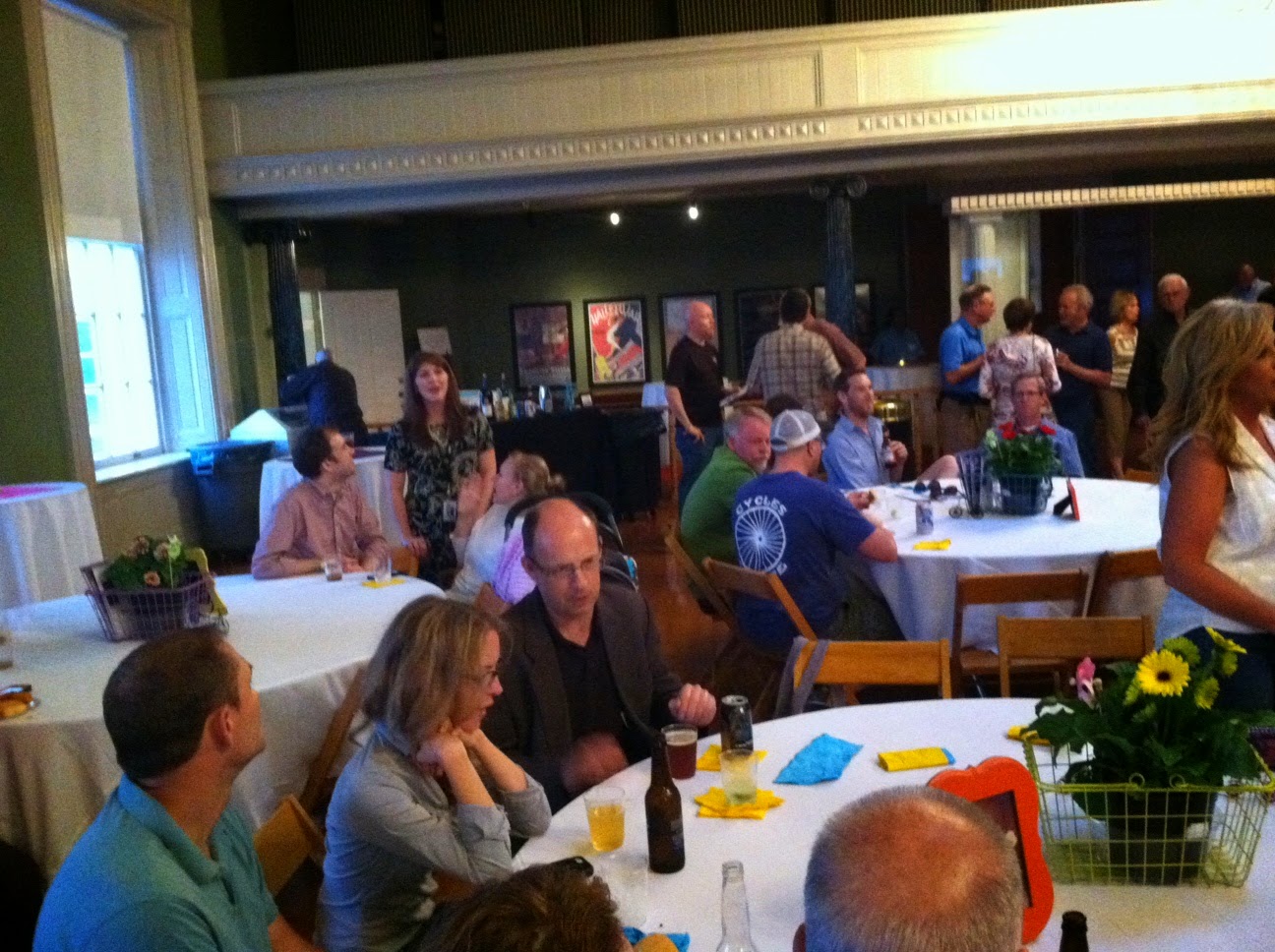 The reception featured good food and drink, good live music, and interesting company.
I did not take part in the Bike-Walk Summit, but I understand that there was fairly good participation as we take baby steps toward statewide advocacy. I supported the movement by riding my bike.
CycloFemme
Our friends Lisa Mullis and Joe Jacobs at Arkansas Outside once again sponsored the local Cyclofemme ride on Sunday, May11. "A women only ride, celebrating the power of the bicycle and inspiring girls to get on a bike and ride. " A women only ride? I'm there!
I met Diane as I rode back into town near the end of my ride and escorted her to Murry Park in order to do some reporting. Cyclofemme did, indeed, demonstrate the strength and influence of the female cyclists of our community.  I recognized a lot of leaders among the women, including long-time advocates Coreen Frasier and Judy Lansky, along with some "emergers" like Stacey Tierny, Victoria Crumpton, and Laura Wooldridge. 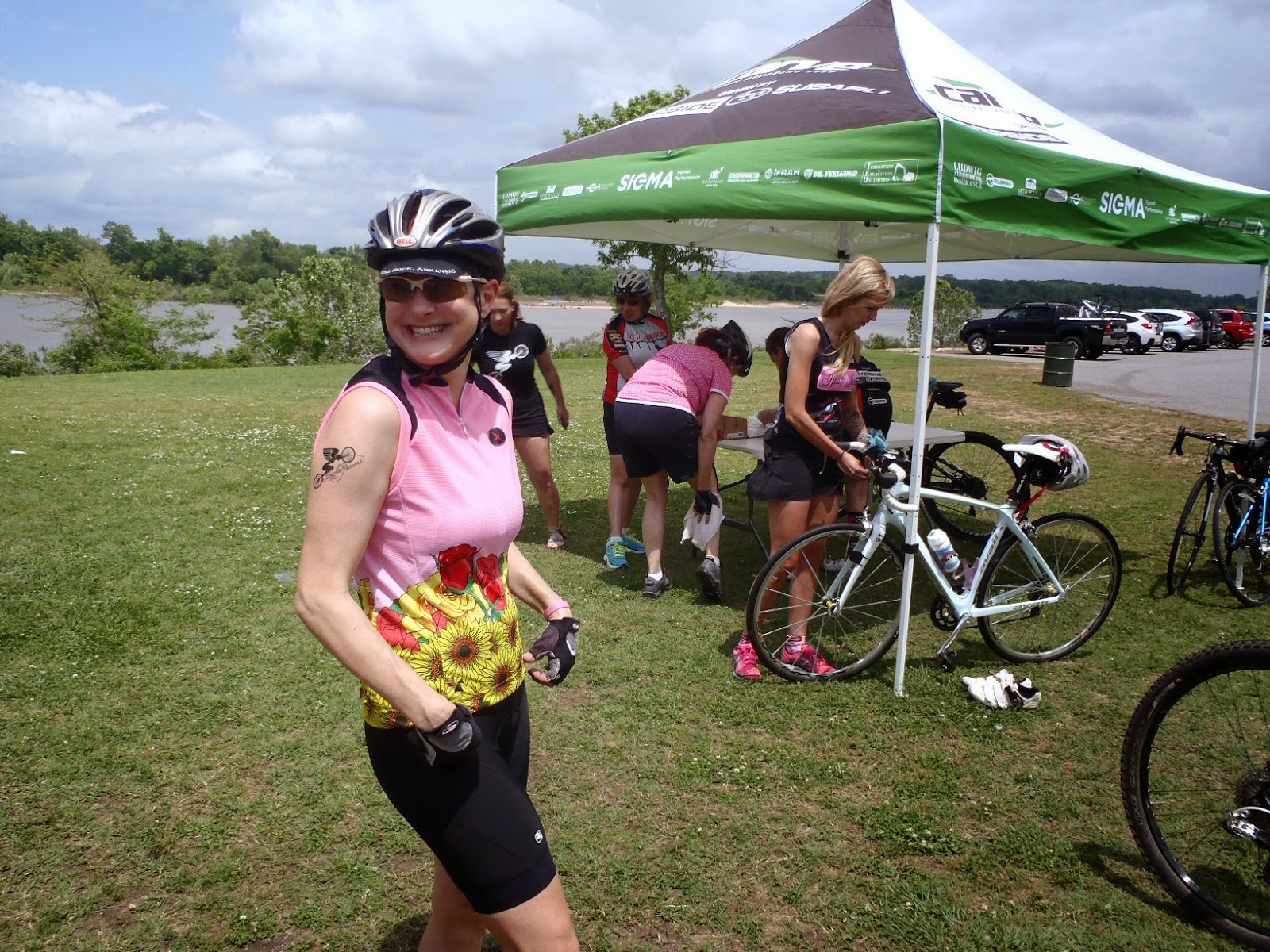 Diane showing off her new temp tattoo. Victoria Crumpton (center) and the Heels on Wheels women were out in force. 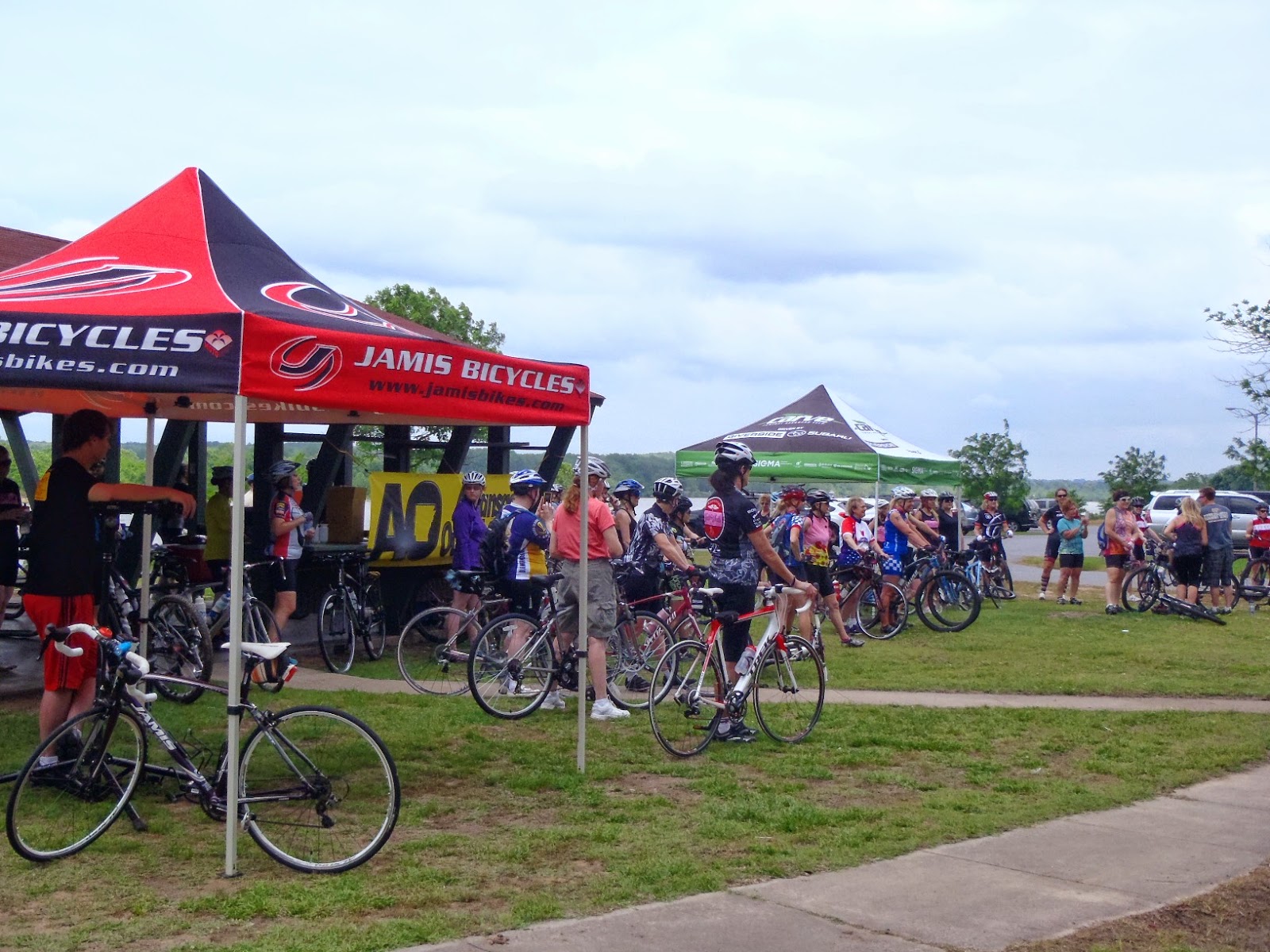 There was a large, very diverse group of riders.
After some visiting and tattoo application time, Lisa Mullis started things off by thanking everyone and sorting out the ride groups. There was then an interesting procession as clusters of women, including road riders, mountain bikers, and casual riders, rolled out for their respective rides before gathering again for refreshments and camaraderie.


OA thanked some other supporters on Facebook:
"Thank you CARVE, Jim Allen of Wild Birds Unlimited, Heels on Wheels, Geek Eats and The Community Bicyclist Bike Shop for your support...."
Credit where due.

..and elsewhere along the trail 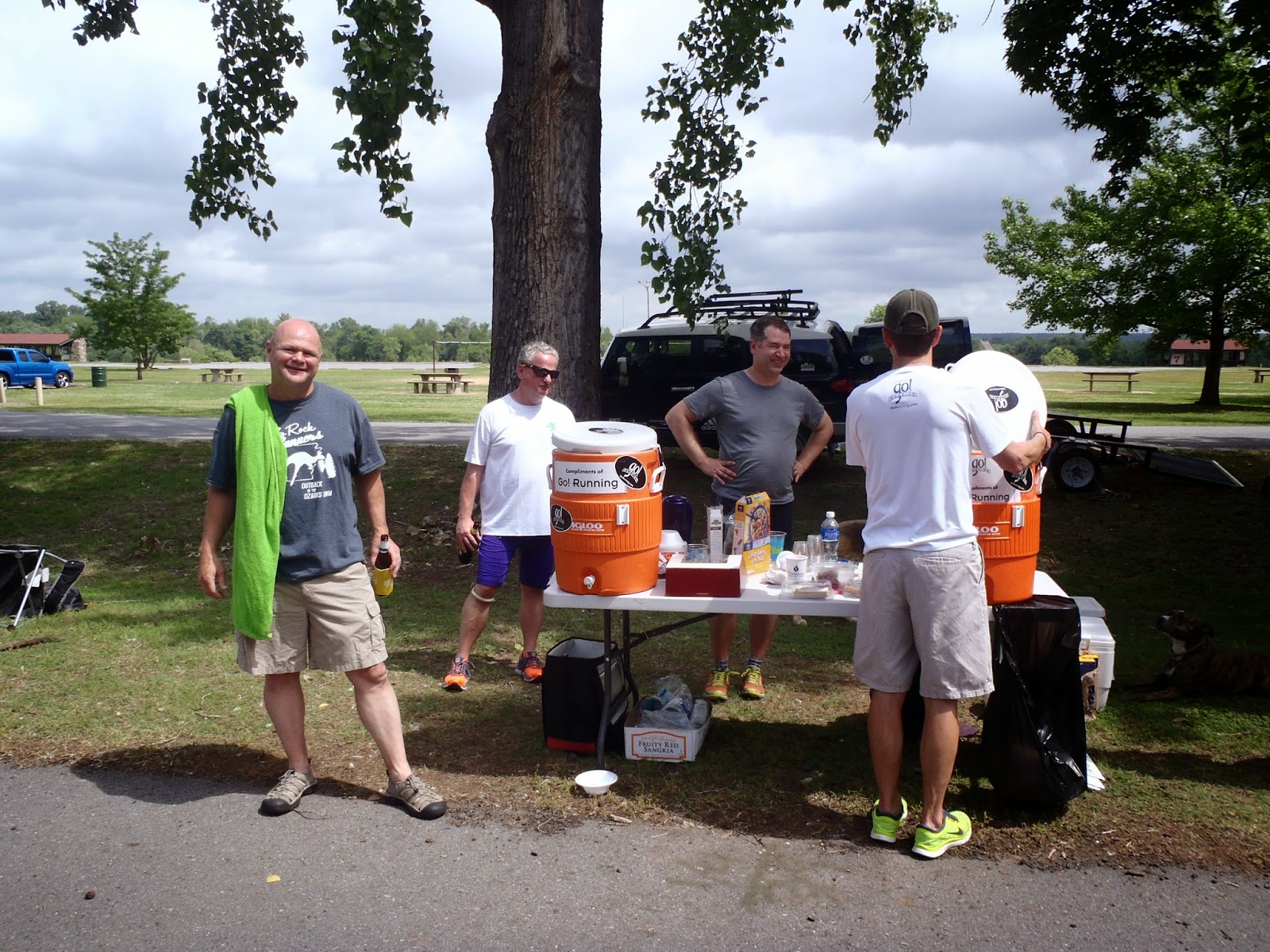 ﻿
This Go!Running crew was handing out water, sports drinks, and snacks. A wink and a nudge might has gotten one a mimosa or a bloody Mary, but I don't think those were among the "official" offerings.
In addition to a bunch of great local bike shops, we are also served by fine locally owned running stores like Gary Taylor's Go!Running and Bill Torrey's Rock City Running. Go!Running has made a bit of a mark by setting up cold water stations and this "non event" aid station along the Arkansas River Trail. Good fun and well appreciated. 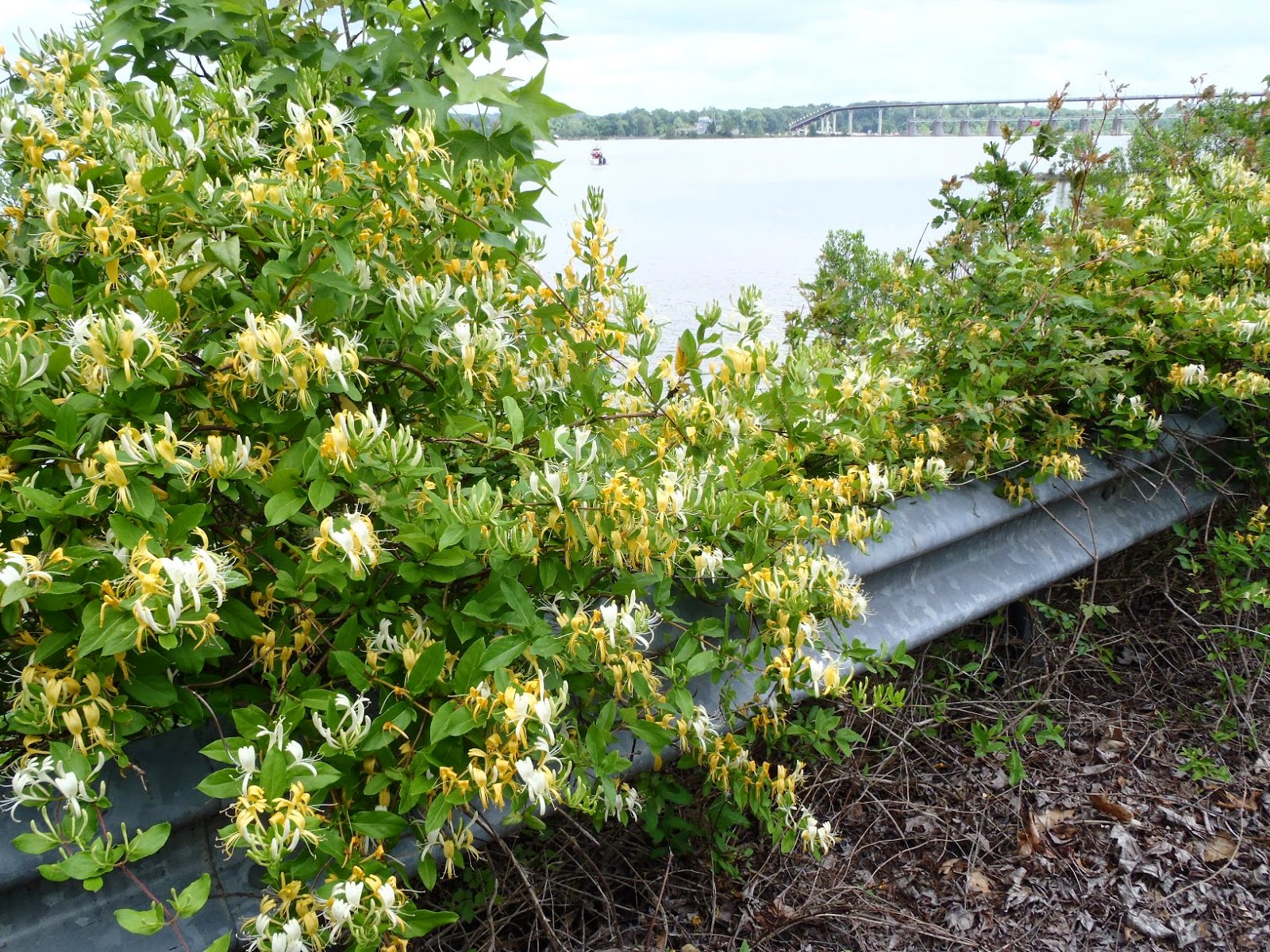 Sweet!
The honeysuckle along the river has perfumed long stretches of the trail with its intoxicating aroma. It makes you just want to close your eyes and drink in the frangrance, but don't do that! You're riding a bike and safety comes first. The mulberries are near ripe and soon the wild plums will be ready to go as well, making for sweet trailside snacks. 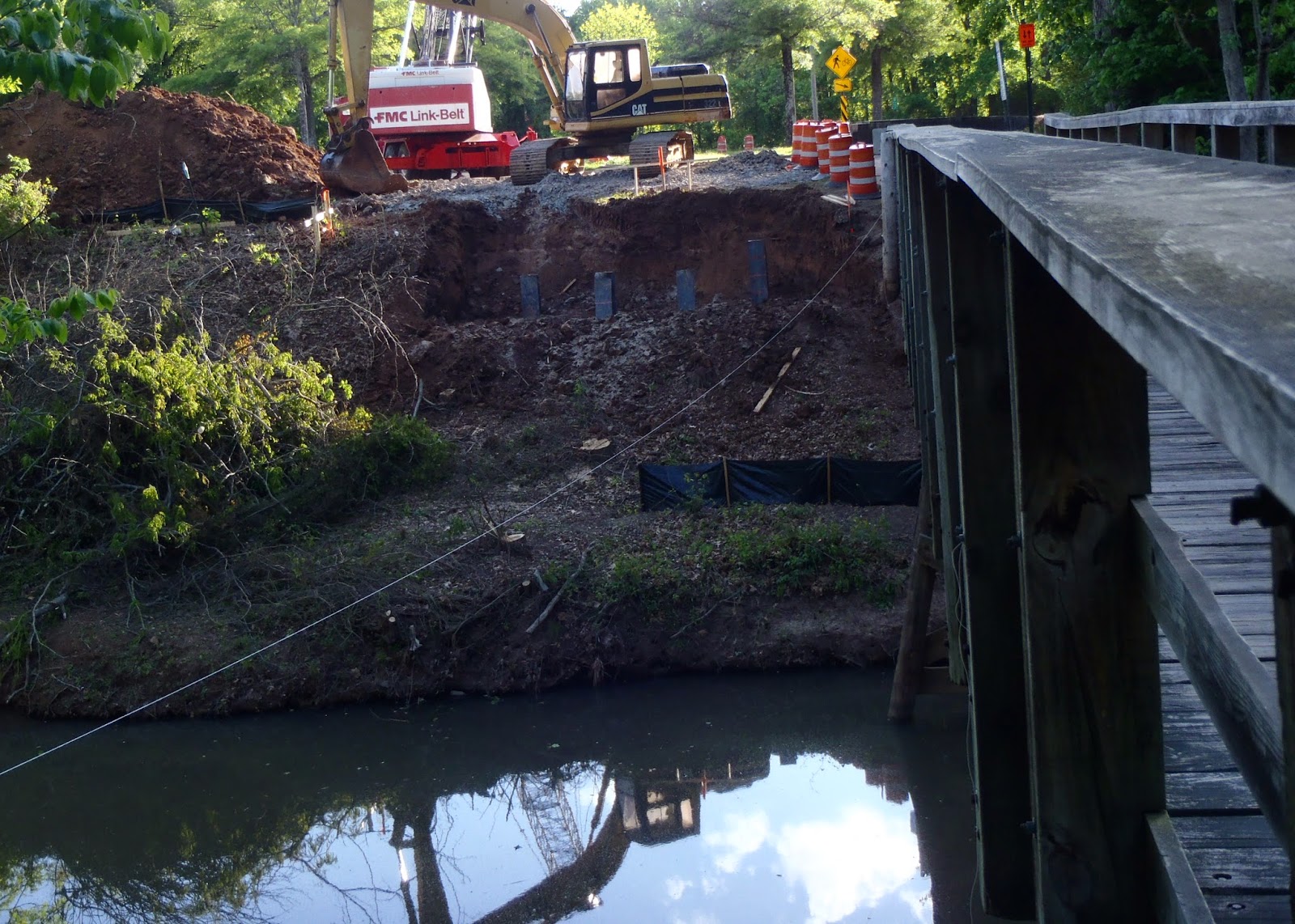 Shillcutt Bayou Bridge site
Work is well underway on the new Shillcutt Bayou Bridge at Burns Park. The new bridge is prallel to the bone-shaking wooden bridge. Completion of the new bridge is expected to be complete around the end of July, followed by completion of the approaches near the end of August. The trail will remain open throughout the project and the old bridge will remain in place after completion, as the wooden bridge  is built over a wastewater force main.
Posted by JBar at 9:47 AM