As I have stated before, while I'm generally opposed to superfluous nighttime lighting and support night skies initiatives to reduce light pollution, I will readily admit that I love the LED lights of the Big Dam Bridge and Two Rivers Park Bridge. That being said, I was excited when it was announced that the Main Street, Junction, and Clinton Park Bridges would get similar treatment, thanks in large part to a grant from Entergy Arkansas. The bridges were illuminated on Thursday, December 19, as a crowd of over 5000 folks turned out on a balmy winter night to hear live music, a little talking from local dignitaries and  former President Bill Clinton, and to see the switches thrown to light up the bridges.
I've got to say that Clinton is still a star. Think what you may of his politics, he can charm, scold, give a sermon, relate a parable, and make his point all in the course of a few minutes, and do so without making anyone uncomfortable. His short speech last night was likely less than 5-minutes long, but he managed to thank all of his supporters, gently chastise leaders who refuse to compromise and work with one another, recognize his mother, encourage everyone to love their brother,  and, oh, yeah, turn on the bridge lights after enlightening the crowd.  The man has a way of planting fertile seeds for thought.
The award for brevity among the few speakers goes to NLR Mayor Joe Smith. Thank you, Joe. Being both gracious and brief will get a politician high marks from me.

The Philips LED lighting gives the bridges something in common with such iconic structures as the Eiffel Tower, the Sydney Opera House, and the Empire State Building. Our city continues to grow in terms of quality-of-life features. We're not big, but I like to think of Central Arkansas as a cozy home that has everything needed for comfort and warmth. And we keep making it better with each improvement. 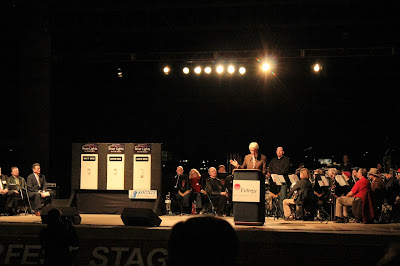 There is a reason that Bill Clinton remains much-loved around the world. Whatever "it" is, Bill has a truckload. 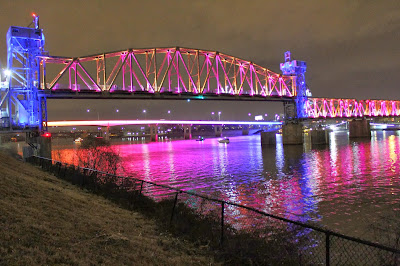 I think I want to fly somewhere just so I can come home at night to see this from the air on approach to the airport. 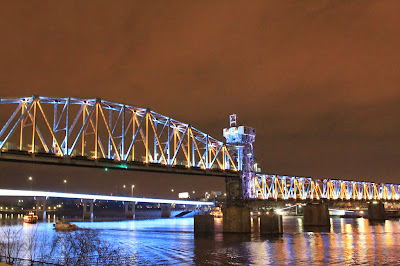 The lighting can display millions of combinations of color and motion. 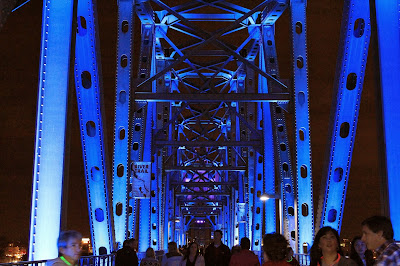 With its stairs and elevator, I have considered the Junction Bridge to be a bit of a stepsister among the bike/pedestrian bridges. I think it just became the beauty queen of the family. 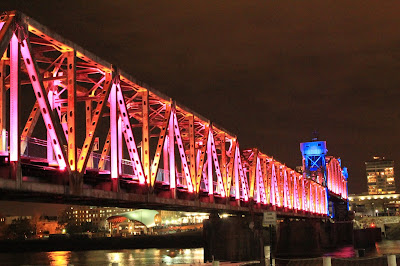 The lights will be on from dusk to midnight each night, and will be in a red-green Christmas theme through the holidays.
I'm looking forward to seeing the bridges from various points around the area. I'm thinking that I might have to try the view from the Vista Trail near NLR's Fort Roots sooner rather than later.
While those of in the cycling community have long appreciated the value of our bridges, this project will enhance the appreciation of these assets by a wider audience.