It's not the zombie apocalypse, but it is frightening. I'm talking about the inattentive, distracted, totally unpredictable drivers that populate our roads. Unlike zombies, they don't exhibit the lurching walk, ragged bloodied clothes, and dangling shreds of flesh to warn us that they are on the march. Like zombies, they do have human form making it difficult to distinguish them from true, living humans when behind the wheel. 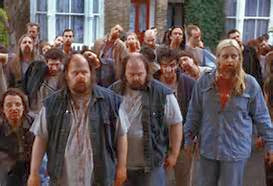 Potential drivers lined up at the DMV for drivers licenses.
Runners struck by newspaper carrier on Chenal Valley Drive
On this past Saturday morning a group of 4 runners was struck by a 67-year-old newspaper carrier. The time was pre-dawn, about 6:30, and the details are murky from there. A friend, who had just begun his own run nearby heard the commotion and was among the first to the scene, reported it to me.
From his report:
3 adult male victims were down on the ground along side the road and on the grass between the road and the sidewalk. A third adult male victim was on his feet frantically screaming for help into his phone. He was trying to explain to the 911 operator in a very panicked, almost impossible to understand voice where they were located. My partner, knowing exactly where we were located called 911 himself to allow them to hear instructions in a more calm voice. We then evaluated the situation checking out all 4. 3 of the 4 had what appeared to be serious injuries. They were all conscious and able to talk but complained of extreme pain, difficulty breathing etc. At least two of the three also had visible head injuries. A doctor who lived right at the scene heard the commotion and came to the scene to assist. Eventually the fire department, ambulances and police arrived and all victims were transported to the hospital. The injuries appeared severe and I overheard an EMT say "critical" but my guess is that all will survive.
My reporter left with the impression that the runners had been running on the right side of the road, likely using the bike lane and the traffic lane, and were struck from behind. It was obviously a confusing scene and the driver possibly went down the road and then turned to return to the scene. His impression is contradicted by a newspaper article on the incident.
A report in Sunday's Democrat-Gazette stated that the "Little Rock collision report marked the vehicle of James York, 67, as striking the runners in the southbound lane of Chenal Valley Drive as the vehicle traveled north, just after turning from Serian Circle."  Chenal Valley is a broad avenue so it is not hard to imagine a newspaper carrier moving to the left side of the road in those early hours. The runners told officers that they were running in the bike lane against traffic.
If the newspaper article is correct, it would mean that the runners were properly running against traffic so that they could see oncoming cars, but were struck from behind as the delivery vehicle traveled on the wrong side of the road.
How the hell do you avoid that? Hi-vis, reflective clothing is very effective. They could have run on the sidewalk, but sidewalks typically are crossed with curbs and driveways and are usually not favored by runners. The fact is, that as pedestrians and cyclists we can't always anticipate the actions of drivers.
No citations had been issued as of the time of the article.
This struck a nerve with me...
I had pondered writing an article on the topic of dealing with the random actions of bad drivers due to a near-disastrous experience of my own. On Christmas morning, I left home on Park Hill in North Little Rock to ride my bike across town the my in-laws' home for Christmas dinner. At 11:00 on Christmas Morning there was almost no traffic, I made both of the traffic lights near the bottom of the hill on "green" and was relaxed on the near-vacant 4-lane road. As I passed a gas station on Main Street, a car traveling in the opposite direction suddenly veered in my direction. The driver did not signal or slow as she took a long diagonal across both opposing traffic lanes toward the gas pumps. I was sure that I was about to have a head-on collision with a Buick, but I locked my brakes, put my bike into a skid, and managed to steer into the driveway and onto the adjacent sidewalk as the driver finally saw me and braked as well. We were probably 10 feet away from a crash that would not have ended well for me. 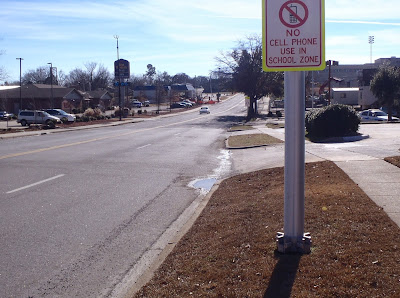 The car that I encountered left the northbound lane about where this white car is located and made a bee-line for the second driveway on the right.
I don't recall ever having heard anybody describe themselves as an inattentive, dangerously bad driver, but there are plenty of them out there. I went back to talk to the driver as she got out of her car. "Ma'am, you need to pay attention to where you're going. Nobody wants to get killed on Christmas Day.", to which she responded,  "I wudn't lookin' for no bicycle."  No shit? I'm shocked.
It was broad daylight and the sun was at her back, I was dressed in a bright blue jacket and there was no other traffic in the vicinity.
I consider myself to be a very cautious rider, warily eyeing traffic approaching on cross streets, assuming that folks will run red lights and stop signs, and taking it for granted that drivers do not see me, but how do you anticipate the totally erratic? The fact is that we can't anticipate these things. My driver thought she had the road to herself and didn't need to be paying attention. She may have been messing with her phone or simply being lazy and careless. The newspaper carrier had likely followed the same pattern for many mornings without issue before he ran down 4 runners. The odds were in his favor until his luck ran out, along with that of the runners.
As runners, walkers, and riders we are vulnerable and over-matched in our automobile-centric world. Flouro has made a comeback in the style business, which means that it is once again fashionable to wear hi-vis gear. Having been though a couple of generations of day-glo phases over the years, I not crazy about the look, but in our world visibility is always your friend and hi-vis, along with flashing lights, is probably the most effective thing that we can employ to be seen on the road. 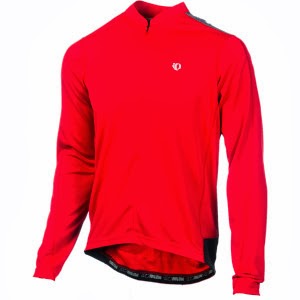 Black kits have dominated cycling for the last few years, but the more practical hi-vis is now back in style.
It's hard for me to make a solid point about dealing with random unpredictable driver behavior. Some things are simply beyond our control, so I'll just wrap this up with the usual "be careful".
Oh, yeah, and ride like you're invisible. To many drivers, we are.
Posted by JBar at 12:34 PM

i saw a car on the river trail going west near adjacent to the rebsamen golf course on Saturday. I honked to a lot as did some other drivers who were on the road with me. The driver seemed not to notice he was on a very narrow for a car) path. I have not heard of any collisions that took place there. It very much pays to be defensive when we riding.

I've encountered cars, motorcycles, scooters, go-carts, and even a pony cart on the River Trail. I was most amazed at a couple who had entered the trail by driving around the barriers at the bottom of River Mountain Road and was weaving among skaters, riders, kids on training wheels, dog walkers, etc, on a busy weekend morning. They then pulled into a spot with a nice river view and parked. I guess they thought that the rest of the world was jsut playing in the street. I corrected him in what was likely an overly aggressive manner.