I've taken the enforced inactivity of the recent ice event pretty well, catching up on a few minor projects, reading, and eating a little too much; not getting nearly enough exercise, but getting in some walks, yoga and light weight work. That shit is all good and well but by Sunday morning, I wanted OUT! After yet another big breakfast (red beans and rice with eggs, bacon, 8-grain toast. Delicious, but a huge calorie load for the ride I did not take.), I drove down to the river with my camera, intent on hiking up a trail from Big Rock Quarry to Fort Roots. A small creek along the trail creates several waterfalls and I thought that I might catch them in some spectacular icy state. Unfortunately, but not surprisingly, the steep little trail was just too sketchy. The terrain is always fairly tough going, but in the refrozen sleet it was necessary to kick into the ice for every step and footing was still treacherous. It just wasn't worth it, so I backtracked and took my exploration elsewhere.
The quarry was in use at least as early as 1849, and the remnants of the place's use as an industrial site are still apparent in the reinforced concrete structures, cast iron and steel pipe and supports, and the remains of various utility buildings. It never fails that I find scenes in which the industrial combines with the natural to create something that is appealing to the eye. 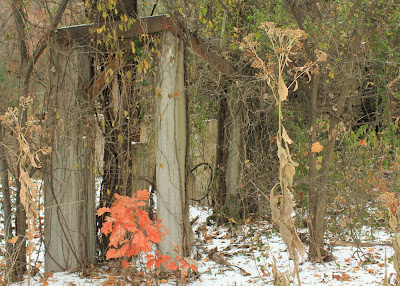 The old structures are being integrated back into the landscape, reminding me of photos of temples re-discovered in the jungles of central America and Asia. Just give this place a little more time! 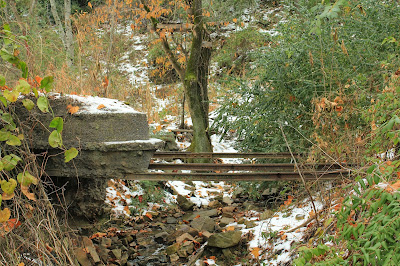 The thickness of this concrete says this was built to stay, whatever it may have been, but the flowing water will get it eventually. 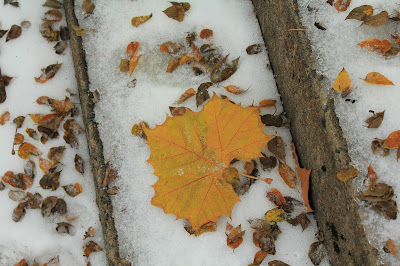 A basic composition practice is to divide a scene into thirds. The steps framing this leaf made that a natural. 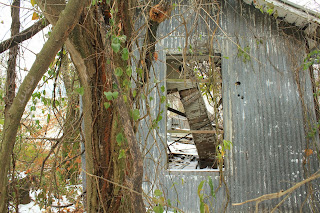 The corrugated tin siding on this structure led me to think it was a storage shed. 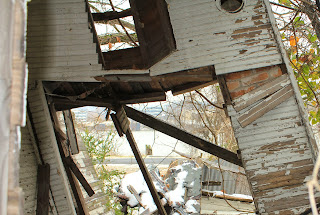 A closer look through the window revealed a brick pier covered with delicate lapboard, making me wonder how the building evolved over its period of use. 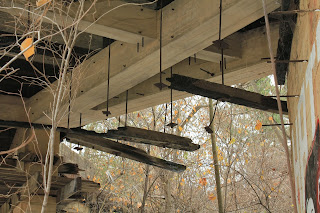 These partially-burned timbers suspended under a concrete structure look like a mobile. 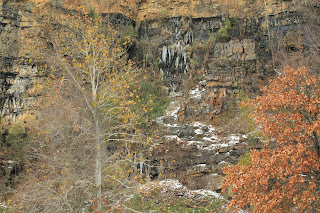 This art is all natural.
In addition to the accidental art provided by nature and the old buildings, it seems that I always run across some intentional art left by some creative soul. 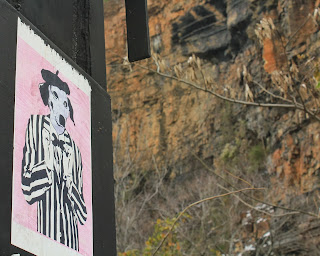 Here we are in Dogtown. 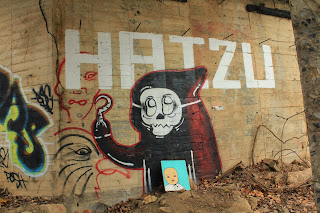 The tagging was OK, but the creepy baby painting added a surreal touch to the scene. 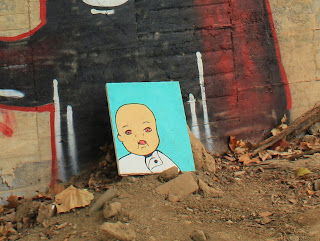 I didn't expect to find a stretched canvas.
You never know what you're going to find along the trail. Sometimes you just have to get off of the pavement and see what you can find.
Posted by JBar at 6:19 PM