Absence: Packed Up The Pick-Up and Headed West

My apologies for the lack of activity here at JBar Cycling, but we have been on vacation at our favorite destination, Salida, Colorado. As is my old-school way, I hesitate to publish the plans for being away from home, even though we have a cluster of early-retired active neighbors and vicious Pomeranians maintaining a security perimeter around the bunker. I realized the futility of my semi-secrecy years ago when I noticed that I had been tagged in photos, tracked by location, and had virtually our every move noted by some aspect of Facebook. Oh, well, at least it is still within our power to stop the mail for a week and then subject my readers to yet another edition of "What We Did On Our Summer Vacation". 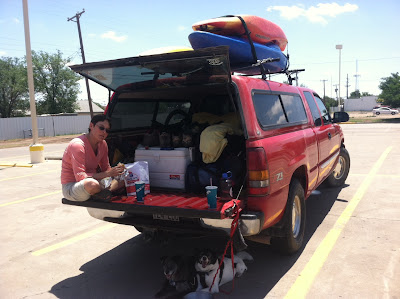 
If you've been visiting this space for a while, you know that we consider Salida to be a special place. I started making annual boating trips to the area many years ago and just have never really had much of a reason to vacation elsewhere. Fortunately, Diane feels the same way; we honeymooned there and celebrated our twelfth anniversary last Sunday with a delicious dinner at the elegant Laughing Lady.

Salida Crossroads: Small World
Moonlight Pizza in Salida is a great place to sit outside, sip a microbrew IPA, have a bite to eat and watch the world go by. I was somewhat surprised to glance up as a guy walked in wearing a BDB100 T-shirt. It took me just a moment to recollect that I was wearing an identical tee. Then, I heard the waitress as she told the wearer, "I told you there was a guy in here with that same T-shirt." 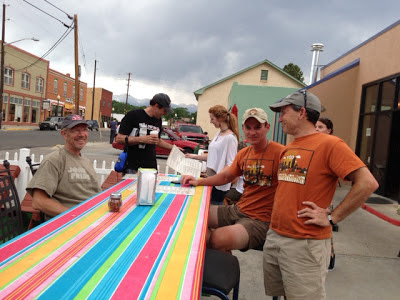 Bill Parker and Will Williamson are Little Rock riders and JBarCycling readers. Obviously, they have refined tastes and are great Americans.
Adding to the coincidence, Ride The Rockies was passing though Salida that day and a guy from Austin sat down to share the table with Bill and Will. I mentioned that my friend Jim Barton was doing the ride on a single-speed. He said, "Yeah, I met him this morning. He sat beside me in a shuttle."

Paddling, Pedaling,  and Parades
I first found my way to this part of Colorado in search of good whitewater, specifically, The Numbers section of the Arkansas River near Buena Vista. The Numbers remains my favorite stretch of water anywhere with 5-6 miles of constant,  high velocity, moderately technical rapids simply named Numbers 1 through 6. The intensity is dependent upon the water volume, but the Numbers defines fun in a kayak for me at amost any level. Low water is creeky and technical, while high water is a crashing, thumping, roaring good time! I caught it this year at what may have been the peak flow of the season with my friend David Wallace. I met David on the Numbers in the early 80's and followed up with a couple of trips to northern California, his home at the time and a big water paddler's playground. It would have been optimistic at the time to have predicted that we would still be having so damn much fun playing in boats! Here's a link to a short video of David and I paddling Numbers 4 and 5, complete with Diane's running commentary.

Road riding around Salida is pretty popular and touring cyclists pass through in droves during the summer. That said, we have more choices for road rides here in Arkansas. Most of the road rides in this part of Colorado either follow river grades or head up a pass, and most local rides are out-and-back. The scenery is great and the drivers are friendly, but you don't have the near-infinite number of loops and interconnected routes that we have here in Central Arkansas, the winters are longer, and the wind does blow. Those may be some of the reasons that mountain biking is extremely popular in this bike-centered community. That, and the fact that the mountain biking is convenient and so very good! 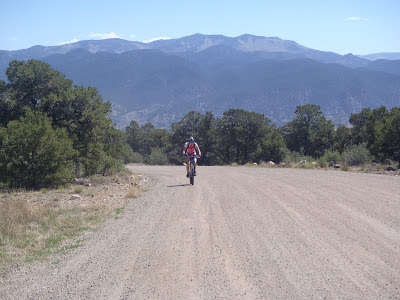 The Little Rainbow Trail is a very popular local single-track ride. We took the "easy" road route up, which wasn't particularly steep, but involved a few miles of steady climbing. 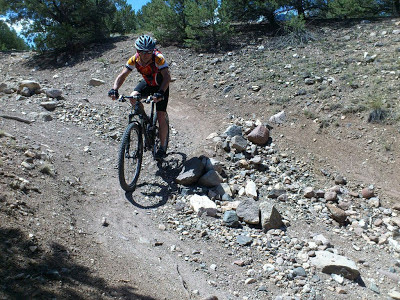 The reward was miles of sweet mostly downhill single-track. Yes, readers, I do actually ride a mountain bike! 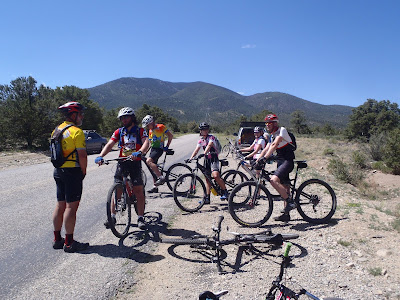 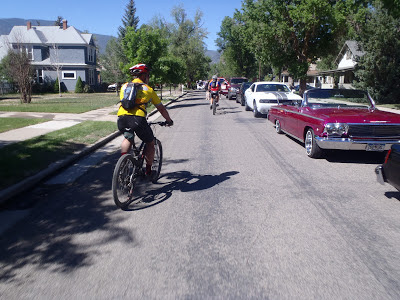 Shriners and Roller Derby queens were forming up for the FibArk parade  as we rode out of town for the Little Rainbow trail. 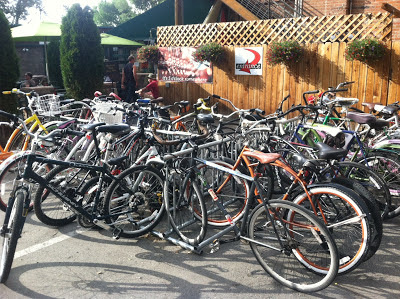 Bike parking at a bar in Salida, where it seems that almost every resident of any age owns some sort of a cruiser or town bike for local transportation. 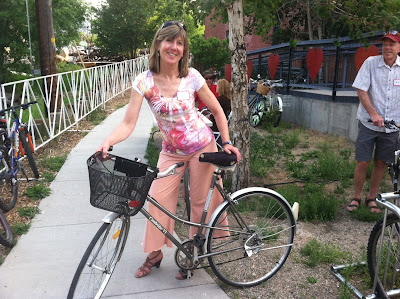 Our friend Connie Smith posing with her townie after a Chamber of Commerce "Business After Hours" event.
Salida doesn't have many parking lots, but the many bike racks get a lot of use. It's a casual town, but love seeing women cruising in skirts and heels to work or social events on an Electra or classic Schwinn.

I'll follow up with another entry and some photos from the FibArk Festival which was taking place during our visit. For now, it's my birthday, I just got off the bike, and I need to go celebrate my special day by bush hogging the pasture.