I keep a fairly detailed ride log. Last March I noted that I broke out a sleeveless jersey on March 13 and we had 7-8 days that exceeded 80 degrees. To be succinct, the weather this March has sucked for cycling. Warmth is long overdue  and my enthusiasm for long hours on the bike has been diminished by the pervasive crappy weather. That said, after being called a whiner, a wimp, and the "P" word over the last week or so, I ventured out Sunday afternoon in search of some scraps of fitness and self-esteem. I had begged off of an early morning ride that, in addition to wind and cold, involved rain and darkness, so the afternoon ride seemed quite reasonable. I've had bad ideas before and this certainly won't be the last. Actually, there is always a certain smug factor that comes with pursuing outdoor activities in extreme conditions. With the right gear and attitude, I'm usually glad to have done it, whether it be kayaking in driving snow or sub-20 temperatures or riding the bike when the wind speed exceeds the temperature, as was the case on Sunday. 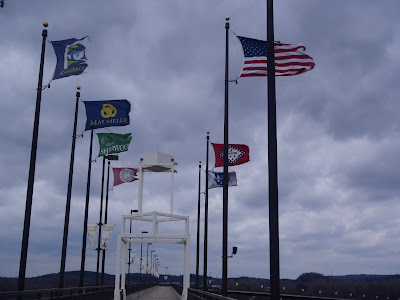 The flags on the BDB were tattered. Cammack Village's banner took the worst of it!
The temperature was 42-degrees and the wind was gusting to 45-MPH. I did see a few friends out on the bikes and in each encounter there was an exchange of that little smile and shrug that says, "Yeah, I'm out here, too."

Thinking ahead
This will soon be behind us and it is time to start thinking about some of the event rides that are over the horizon.
Here are a few rides for which registration is open:

65 Roses- April 27 Searcy
I've never done this ride, but it has gained a reputation as being a good one. Here's the low-down:

Tour de Rock-June 1 from North Little Rock
Opportunities for this ride range from 10 miles to the fastest century you've ever ridden.The course is a pancake flat "out east" route and if you plan to hang with the front group you'll need your big boy/girl spandex on. I rode my personal best century here a few years ago at 4:35, getting dropped from the lead group at around mile 80. The 2013 TdR is a week earlier than it has been in recent years, which means we'll be in town and I have no vacation excuse. Flat doesn't mean easy and there is no coasting. Of course, you can take your time and enjoy every well-stocked aid station if you wish. The Tour de Rock has a route and a pace for everyone and the popular weekly training rides leading up to the event are worth the registration fee.

The Big Dam Bridge 100- September 28 from Little Rock
This is the big daddy cycling event in Arkansas. It has grown every year since its inaugural ride on October 1, 2006. It's a ride. It's a party. It's a race. It's a celebration of riding in Central Arkansas and a tribute to the Big Dam Bridge, the iconic structure that seems to anchor our community.

Thank you for mentioning the 65 roses tour. i hope to see u there. thanks, patrick emery

Thanks for the list! Don't forget about the Tour de Toad ride which is a part of the Toadsuck Festival. It offers 25 and 45 mile routes starting and ending at Conway High School on May 5.

M, I can't forget about it if i don't know about it! Add a link to the comments if you don't mind. The first link I came up with showed registration closed. Make it easy for us!

Here's the link to register:
http://www.active.com/cycling/conway-ar/tour-de-toad-2013

I think toadsuck.org just did some sort of update to their website, because I can't seem to find any other info about the race at that site. I'm signing up for the race, but information seems to be hard to come by.