Spring is upon us. Daylight Saving Time has returned to bring on longer evening rides, retailers are stocked with skimpy new fashions, and the garden centers are packed with ambitious planners.
I know that we're bit short on being "official", with spring equinox occurring on March 16, but I'm calling it close enough!
Sunrise    Sunset

That said, I have gathered a bit of empirical evidence supporting my position that spring has indeed sprung here in the Natural State. 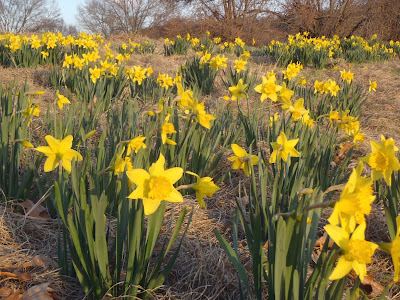 This spread of daffodils in Burns Park has been in bloom for a couple of weeks, but have now reached full glory.

- Willie dog came home from our last Camp Robinson outing bearing a collection of ticks.
- The weeds in our backyard have reached a mowable height, though I am choosing to ignore them for now.
- Tights and jacket have given way to knee warmers, arm warmers, and other bits that allow for mid-ride adjustments to warming days.

All of those signs are somewhat subtle when compared to our next harbinger:

While Pennsylvania hangs its top hat on the February 2 appearance on Punxsutawney Phil, the King of the Groundhogs, around here, we have little faith in large subterranean rodents when it come to prognostication. I depend on the appearance of our more reliable homegrown sign. Whereas Phil will poke his head out into the miserable conditions typical of February in Pennsylvania, our own seasonal marker, known from this time forward as Fairweather Jones*, will not poke his furry little head out for anything less than truly springlike conditions. 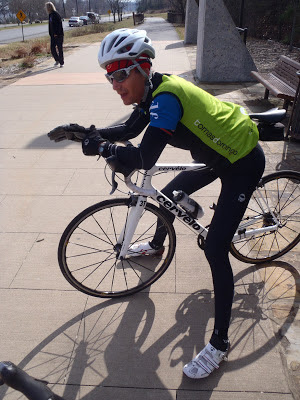 Fairweather at the moment he saw his shadow. "Damn right it's spring, or I wouldn't be here."
As you can see by the fact that F. Jones is fully attired in tights, vest, and other winter accoutrement's for a 70 degree day, he approaches spring with caution. His conservative, some might say wimpy, approach makes him a reliable marker. The fact that he saw his shadow doesn't necessarily mean more bad weather. The fact that he casts a shadow at all means that he's still got a couple of extra layers of fleece on his skinny ass.
* all characters presented here are strictly fictional. Any resemblance to actual people is a remarkable coincidence.
Beware of crowds and construction.
With warm weather comes the opportunity for conflict. Most of the folks who create friction and complain are not the everyday, year-round trail users, but that is not to say that complaints are not legitimate. 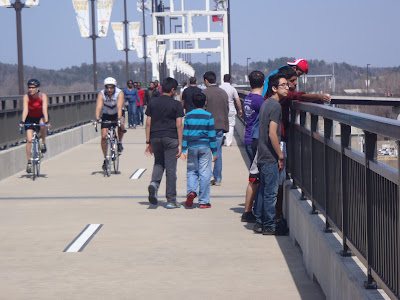 The crowds were picking up on the BDB last Saturday, and Two Rivers Park was very active with the usual family strollers. Two Rivers has taken some of the pressure off of the BDB, but that means riders need to be especially cautious and respectful in Two Rivers. Count on it to be crowded, and you can turn loose on the roads to the west. 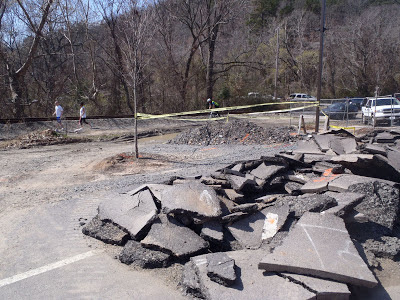 Work to repair the washout between River Mountain Road and the Two Rivers Bridge will continue for the next several weeks. Cyclists and walkers can find their way around the mess, but the limited parking will be an issue. Beware when descending River Mountain at high speeds, as the area near the bottom of the hill will likely be congested as drivers seek out scarce parking places. 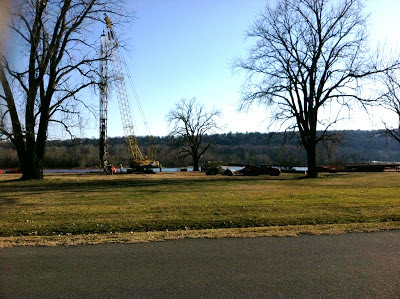 Work is in full swing on the construction of a fishing pier near the Burns Park soccer fields in North Little Rock. A short stretch of the trail will be closed during work hours, but it is easily detoured.
Folks, here we go, launching into another season of wonderful riding here in Central Arkansas. For seasonal riders, chains are being lubed, tires aired and legs shaved. If you've taken the winter off of the bike, give it a good going over before you hit the road, correct anything that needs fixing, then roll on out.
It's time!
Posted by JBar at 1:04 PM

These girls job and have passion to provide such services with dedication.Here Few very important features of our services:

Appoint These upcoming but 18+ Independent Hyderabad Escorts ladies by only hotline call and enjoys your great service.

Instead, I Would like to show You the followings: