Diet Plan, Sock Drawer Conundrum and a Couple of Updates

Recent rides have driven me to reassess my fitness and diet plans. I may not have much of a motor on the bike, but I do have a bit of pride. One one recent fine afternoon I grabbed a pair of well-worn Giordana Carbon Red bibs and my Spokes bike shop jersey. The bibs have red leg bands and are cut low in the front and the sides, a fine configuration for warm weather, while my Spokes jersey is very close-fitting and incorporates quite a bit of black with red accents. Usually the effect is pretty stylish and very slimming, if I may say so, but when I glanced into a mirror before heading out, I wasn't pleased. My ice cream was bulging in a very unflattering way. As I related this to my ride buddy Jason, he knew exactly what I meant. "You were looking like a can of busted biscuits?" Yep. Count me among those with work to do before the swimsuit season. 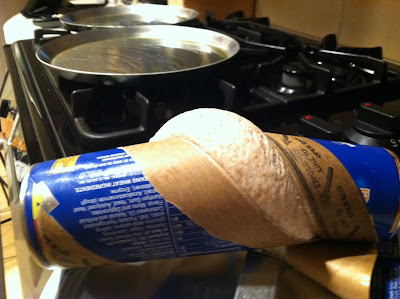 This made for a great pizza, but the look isn't what I'd hoped for on the bike.
Yep, He Saw His Shadow! 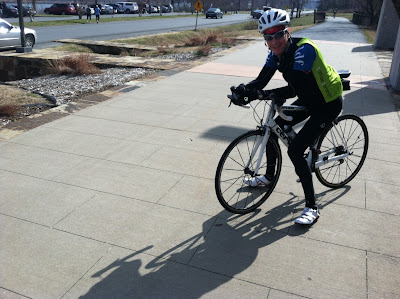 When I mentioned the spring appearance my friend Fairweather Jones last week, I really thought the whole "if he sees his shadow" groundhog analogy held no merit. It was suggested by our buddy Sam and I thought it was pretty funny, as Jones is well known for his aversion to cold weather riding. That is, it was funny until I saw this week's weather forecast. I'm not going to press Tom to get out before May next year.
This leads me up to the sock drawer problem. I usually shift my gear around so that I can readily gather what I need for a ride.  I moved summer gear into my rotation in a fit of optimism and now  my "current season" drawers are overflowing. In the last couple of weeks, I've worn some of everything and I've got stuff piled everywhere.
I promise that I won't be cursing the heat when it surely arrives.
Buddy's Broadway Bridge Goes White
Judge Buddy Villines has given up on his plans to paint the new Broadway Bridge in a red, white, and blue scheme, citing future maintenance costs and a lack of public support. Justice of the Peace Tyler Denton did a casual survey of his constituents and the sentiment was clear with 135 against and 10 for the paint plan. Thanks for listening, Judge.

Diamond Bear Still Looking to Move
The Dem-Gaz also reported that the Diamond Bear Brewery is still seeking a new larger location. Many of us were excited when plans for a brewery and pub on River Road were announced; however, that plan was way over budget and an offer on a second location nearby has fallen through. All of the locations being discussed are in North Little Rock.

I wrote a longish post about this, but I was even boring myself.
Judy Lansky and the BACA leadership wrote a very good letter a requested a meeting with Jim McKenzie of Metroplan and representitives of the AHTD to discuss safety problems at the site. They got the meeting and they got some results! Follow the link and let Judy tell you about it.
Here is a link to the BACA report.
Posted by JBar at 8:41 PM

That whole biscuit thing...welcome to the club....

Now I'm hungry for a pizza. thanks

They contain the trace mineral Iodine within the daily required amounts, best over the counter diet pills for women