The sheer number of folks along the River Trail these days is a good indication that there is a lot going on as runners, riders, skaters, walkers, fishermen and all types of other users share the resource, each with their own mission and their own measure of what makes up a successful day.

Boston Mountain Cyclists , along with The Community Bicyclist, are once again hosting time trials near Two Rivers Park in Little Rock. Follow the time trail link for the event flyer, but basic info is that the event takes place near where the RR tracks cross Pinnacle Valley Road west of Two Rivers Park at 6:30 most Thursday evenings. A time trial is called the "race of truth" because there are no team tactics, no drafting, and no hiding in the pack. It is simply a matter of a single rider covering a set distance as fast as they can. Much of time trialing is a mental exercise, with some riders excelling at the discipline, relishing the solitude and the pain, while others simply suffer. 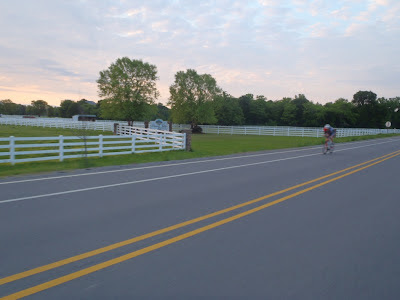 Time trialing is about maximizing the pain to minimize the time. If you've got much left in your legs at the finish line, you're not doing it right! For good time trialists, the pain is said to be exquisite, for us regular folks, it just hurts! 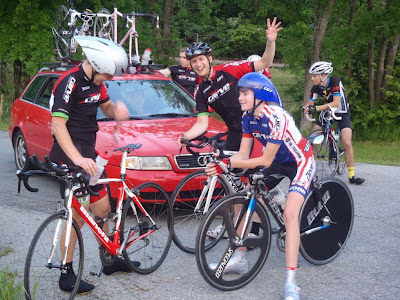 Patrick, Andrew, and Evan are through with the suffering part and have moved on to "goofy".

My buddy Mike and I rode out to check out the TT last Thursday and as we rode through Two Rivers Park, we started seeing cyclist after cyclist, many with trial bikes and aero gear and many with standard road kit, all intent on their mission. It was reported that 55 riders had participated that evening, and the series is growing. I might even venture a try before they lengthen the course next month!

The crop is in!
I really enjoy it when I stumble across edibles growing free in the wild. Along the River Trail, there is a bumper crop of mulberries, and the trees are readily located by the purple stains puddling the trail. 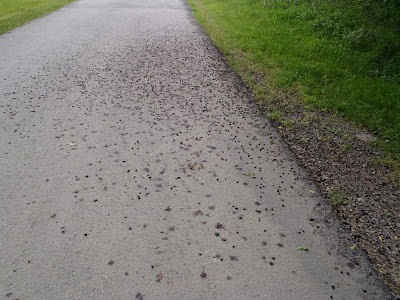 These fallen mulberries mark the spot! Ripe mulberries are sweet, tasty, and very common along the NLR trail. Once you start looking for them, it becomes easier to spot the many other mulberries nearby. 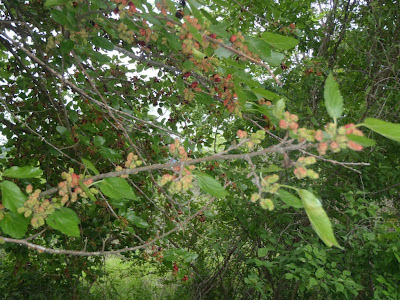 It seemed early for mulberries, so I checked the date of my post on the subject from 2011. It was a full month later, with berries ripening in mid-May. Folks, I think we're going to have a long, hot summer! 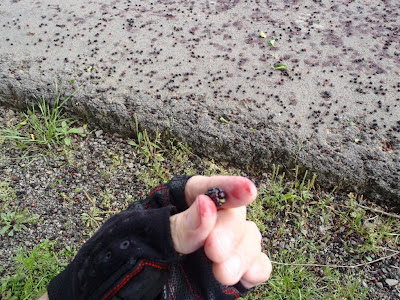 I would advise against white bibs as a general rule, but if you choose to go that route, you might want to skip the mulberries. You cannot eat the ripe ones and hope to come away unstained.

Good for the goose...
While I'm a lover of almost all living things (my exception list starts with chiggers and buffalo gnats), I supported NLR's goose hunt plan. Though I had little appetite for blasting the pesky fowl, action was definitely needed. A compromise was reached with folks who protested the hunt and, though the friends of the geese have come up short of their promise to raise funds for the effort, the NLR Parks folks contracted some "hired guns" in the form of Australian Shepherds to keep the geese moving along. 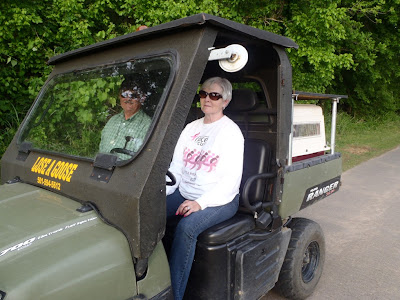 This is a job that I could enjoy! The Aussies bringing up the rear have done a good job of moving the geese out of the northside parks. 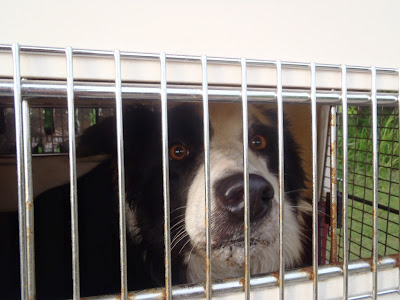 Goose? Goose? Anybody seen a goose?

Since the dogs have gone to work, I've seen gaggles of geese in some new locations, including the grounds of Garver, LLC, and a field on County farm Road. I assume they are refugees as the numbers in the parks have dropped dramatically. To that I say good riddance, and I hope that the solution is permanent. 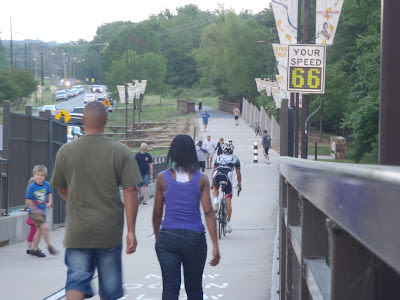 The speed-indicating sign on the BDB was operational for a short time, the went to "00". I think it attracted some speedsters, but surely none beat this time posted by the devil-may-care Robert SanJuan.

Before complainers jump on Robert (who is properly attired for villainy in his CARVE kit), he was riding a very sensible speed as he passed the now-constant "66".

I'm talking about the seemingly increasing number of cyclists choosing not to wear a helmet. I expect it from the Wal-Mart bike crowd and from the dudes with black T's and BMX bikes, but there suddenly seems to be a lot of kitted up road riders riding bare-headed. Granted, most appear to be newbies, but I still don't get it. They say there are two kinds of riders, those who have crashed and those who will. I had been riding a couple of years when I first heard that and at the time I had never been on the pavement other than a minor "failure to clip out" incident. It wasn't long, however, before I had my first abrupt encounter with the asphalt. Then I had my second. Then I had what I hope is the worst accident that ever happens to me. 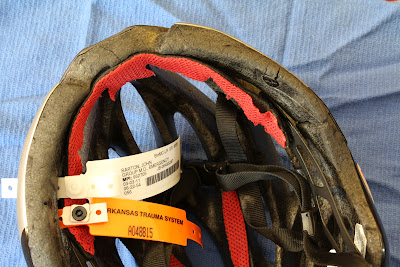 The compressed area in the upper right of this photo was the impact point when I crashed last March. The blow was enough to knock me unconscious, chip the orbit above my right eye, fracture eight ribs and a vertebrae. The foam was compressed and fractured and I believe that it saved my life.

I've heard all the excuses for riding without a helmet and don't buy into any of them. Modern bike helmets are cool and comfortable. If yours is neither, go shopping.

I have been approached by three different folks in recent weeks specifically asking me to write something about the bare-headed trend. I decided not to bother until last week when I ran into my wife at a Specialized bike demo. Dan Lysk of Arkansas Cycling and Fitness brought up the subject and I pretty much waved it off; however, before I finished my ride I got a call from Diane. As she rode back to her office from the demo, she had come across an accident near Burns Park. A couple, both wearing helmets,  had been JRA, "just riding along", when the husband moved over to give way to a runner. In doing so, he clipped his wife's front wheel. What had been a casual evening ride rapidly evolved into a crash, a head injury and an ambulance ride to the emergency room. Diane was calling to say that she was going to be late getting home as she helped the husband gather bikes and get to his vehicle for the drive to the hospital. The woman was showing symptoms of a concussion, her helmet was smashed and she had some road rash, but it would likely have been much more serious without a helmet.

I'm not much on rules and I've been told that pushing helmets "discourages people from riding". If that's so, then perhaps they don't need to ride. I also think that bumping around on platform pedals and fat tires is much lower risk that riding clipped in on a road bike. Choose your own headgear, but please keep your health insurance current as a consideration to the rest of us. I would speculate that most of the bare-headed riders fall into the "those that will" category alluded to in the first paragraph. "Those that have" can usually be seen with helmet firmly buckled.

I think the adults helmet issue falls under the none of my business catagory. I'm certain everyone knows the risks of not wearing a helmet. I just make sure my side of the street is clean; although there are times(if I am on the same route, doing around the same speed I run)I don't wear a helmet and I've been riding 15 years and have had my share of accidents with and without helmets on.

I'll preface this with I wear my helmet 96% of the time. Helmets really came into the norm in the late 90s...before then noone really wore them, not even in the Tour de France or Paris Roubix, less criteruim racing people didn't rock helmets. Just pull out your copy of American Flyers. I also think helmet manufactuars need to come down on the their prices. All the non-dorky looking helmets I found were $150+ at Spokes, that's ridiculous for a piece of foam and I think if comes down to looking like a dork or safety allot of people opt to scrap safety.

Well, they say opinions are like a-holes, everybody's got one. Mine is that helmets are cheap insurance against unlikely events that can have catastrophic consequences. I'm not betting on the New Madrid fault, but for a few bucks, I buy earthquake insurance. And cars used to have steel dashboards, no turn signals and crappy brakes. I'm not lobbying for a mandate; I just don't understand why a rider would want to look like a dork by skipping the helmet.

Great blog John!
No one needs a helmet until there is an accident. I can be an obnoxious helmet Nazi sometimes myself. I just never ever want to be around when anyone much less someone I know crashes and hits their head while I'm there. It was years ago but I know someone who watched his friend die after he crashed here in Little Rock. Not a good experience...

I loved this post. The helmet topic is typically a lightening rod for opinions. You handled it really well and I'm glad you brought it up.

Well done as usual John. I agree, encourage helmets, but let's not get all Nazi about it. Feel will. Americaaa!

Great part on helments! i tell everyone who is getting into riding, i put my helment on before i even get on the bike!
nice john real nice.

I also have noticed what seems to be an increase in the number of riders who seem to know what they are doing and are riding nice bikes but are not wearing helmets. I just don't understand. I continue to be concerned about the less-capable riders without helmets because I suspect they will have no idea what to do if they fall, as they will eventually.