Along The Trail: Projects, Produce And A Modest Proposal

Projects
There always seems to be a project or two under way along the River Trail; some large, most small, but usually resulting in a safer ride experience. On the North Little Rock side, the city has temporarily bypassed a short portion of the trail in the downtown Riverfront Park as the existing asphalt and some pesky cottonwood roots were removed. A couple of the trees have been removed recently and, while I always hate to see a big tree go down, the goal is to make the trail more safe and easier to maintain. 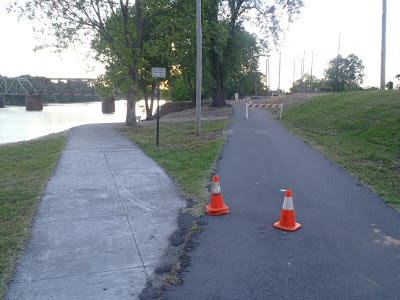 These cones are meant to direct trail users around construction and to the lower level sidewalk. As of Tuesday night, the new asphalt had been laid and was being ridden by scofflaws. I'm unsure if further work is to be done at the site. 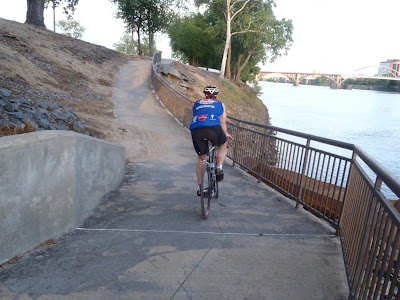 The bypass is actually a cool little diversion, though the sand washing down from the bank above should give riders all the reason they need to go slow! John Martin is the supermodel prop.

On the south side of the trail, the roundabout at Rebsamen Park Road and Riverfront Drive is open to auto traffic, though the newly extended bike lanes are not yet complete. The jury is out on whether this will enhance rider safety as it should. Much will depend on how readily Arkansas drivers and riders adapt to the somewhat foreign concept of traffic circles. The best advice I can give is, "Just keep moving along, folks..." 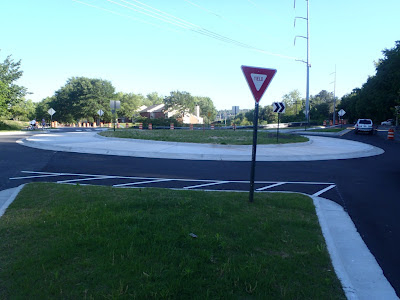 The new traffic circle is open for business. Riders using the road can just go with the flow, while those heading east and entering the street from the bike path will still have to be aware of cars approaching from several directions. The extended bike lanes will be a big help when they are completed.

Produce
Last week's crop report was all about the bounty of fat, sweet mulberries that are easily spotted along the trail. This week's report comes by way of my lovely bride Diane, who spotted some of the first ripe blackberries of the season as she made her lunch ride from Garver. 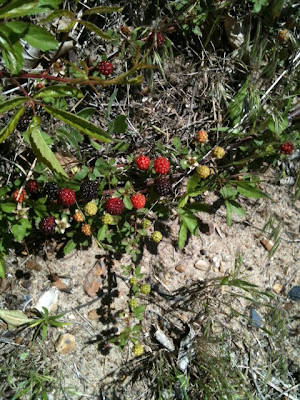 Diane opted not to reveal the exact location of these beauties until she has a chance to do some serious picking, but I'm sure that my sharp-eyed readers will be able to locate some of their own. The area near the Big Rock quarry is usually thick with the fruit-bearing brambles. 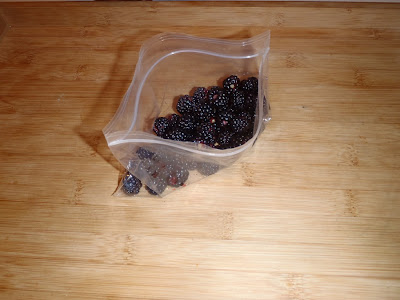 A snack size baggie is perfect for protecting a cell phone from moisture and can do double-duty when trail snacks are encountered. Some of these blackberries got the chance to party with  fresh strawberries in my cereal last night. Mmmmmm..

I love welcoming all of the fresh fruits and vegetables as they come into season, but not nearly as much as my wife does. Diane simply cannot pass up local strawberries, blueberries, peaches,etc, when in season, so there are times that I feel I have to eat them several times a day. Not bad duty, but I'm just one man! How many quarts of berries can one person be expected to consume? The only correct answer at my house is "all of them". They're just too good to waste.

I'm a proponent of all types of cycling, but at heart I'm a recreational road rider. My time outdoors is precious and the River Trail is a spectacular resource. Whether folks are just riding or walking, counting the grazing herds of deer at Two Rivers Park, watching the sun set over Pinnacle Mountain from the BDB, or gazing at the river from the Clinton Park Bridge as it flows downstream into the Grand Prairie, all are embracing a community asset that can be enjoyed by anyone. Our trail system is world class, so I'm always slightly taken aback when I hear a Central Arkansas resident say that they've never been on the trail or have never walked across the Big Dam Bridge. It's especially disturbing to hear some of these same folks complain about the money spent for these projects as "wasteful".
Here's my proposal:
Take a friend, neighbor, business associate, or family member down to the river and show them what they're missing. The Big Dam Bridge is the obvious choice for a walk, but if you can get them on a bike, all the better for expanding the range of your tour. If your guest is stubbornly sedentary, invite them to lunch at Forty-two at the Clinton Library. It's not as impressive as the views from the BDB, but it will give them a chance to see the steady stream of walkers, runners and riders using the CPB, all the while enjoying fine dining and a touch of the Natural State in the heart of the city.
Plan your excursion! Hot weather will soon be upon us and it will be increasingly difficult to tempt folks out of the confines of their air-conditioned abodes.

yum on the berries, I have a few places scoped out where I run that I'm hoping to beat the birds to. However these are dewberries rather than blackberries, closely related but the dewberries ripen first :-)

The trees on the NLR side were removed for the protection of the flood control levee; any improvements to the trail are a fringe benefit. The NLR City Engineer worked hard to get this done quickly. That's more impressive when viewed from the LR perspective where a paving crew was working on the new roundabout at peak-use time Wednesday evening. By the way, the roundabout main lanes are too narrow for two vehicles at the same time and causes conjestion and confusion while drivers freak out and cyclists try to get through the melee.

I think the roundabout is not meant to have 2 vehicles side by side. As drivers acclimate it will serve to reduce congestion as roundabouts do elsewhere. I LIKE IT!

great post, thanks for sharing!!! and will definitely be looking for those berries on my next ride (or run).

WC Hitt is right: the LR roundabout does work much better now that it is fully open to traffic and all the lanes are accessible.