1: a spell of listlessness or despondency
2: often capitalized : a part of the ocean near the equator abounding in calms, squalls, and light shifting winds
3: a state or period of inactivity, stagnation, or slump


My Productivity
Most of my posts are driven by my experiences in riding the River Trail system, the open roads around Central Arkansas, or some of the wealth of locally available single-track in the area. As a result, at this time of year, with its limited ride opportunities and relatively few riders about, my subject matter can get a little scarce. 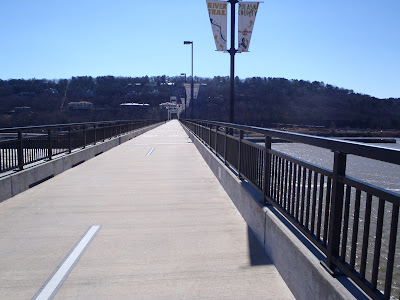 I maintain a fairly consistent, if sparse, ride schedule over the winter, but it can be lonely out there! A single runner approaches in the distance on the BDB this past Saturday. The sunshine belied the fact that it was 31 degrees with a 20 MPH NW wind.

On Saturday, I spent much of the morning eying the thermometer and pondering a ride plan. As the temperature finally nudged 30-degrees around noon, I decided to head down to the River Trail with my mountain bike to ride some single-track and see who was out and about. The single-track was there, but the crowds were thin, to say the least. I did encounter one road cyclist, a few hardy runners, and a half-dozen or so mountain bikers between Pfieffer Loop and the trails at Burns Park. 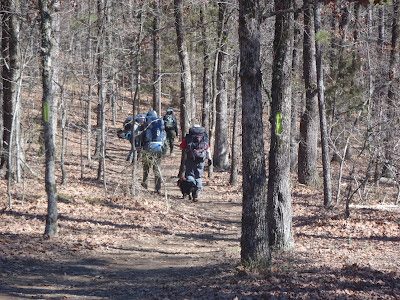 This group of fully loaded backpackers looked way too clean and fresh to have been out overnight, so I assumed their Burns Park trek was in preparation for a bigger adventure.


Our Season
The subject of weather is usually front-and-center with riders this time of year, mostly bitching about the cold and the short days; however, we've experienced a historically mild winter in much of the country. In looking over my 2011 ride log, I noted that by this time last year I had six days marked as "NR (no ride)-snow" , and several more days in which I rode but noted the presence of snow. In fact, last year on February 9, we got snow that precluded riding for several days. It looks like we are about to be treated to what columnist Richard Allin referred to as the annual "Snow Tire and Daffodil Festival", but the feeling of spring has already crept in and a few days of seasonable February weather shouldn't hurt us a bit. Frankly, I'll admit to a little bit of disappointment that I never felt compelled to get out all of my "can't believe we're riding in this" winter kit. There are usually at least a few days each year on which my neighbor Darwin and I shame each other out in some crazy-ass 17 degree, howling wind weather conditions that require cut-out wool socks under my shoe covers, ski gloves, a hat not meant for under-helmet wear, and several layers of warm-everything-else. Those events usually come after a few totally shut in days of snow and ice or miserably cold rain, but we just haven't seen those conditions this winter. On the few truly cold days of this winter, a glance at the forecast would always offer more pleasant days on the horizon, and so it is this week; a promise of snow on Monday, but a return to the 60's by Thursday.